Stems and flowers, and why we should be both

A while back I was watching The Joy Behar Show. The guys out there probably don't know who she is, and those who do probably find her annoying. I like her, though; I'll bet you anything she's a lovely person in real life.

Anyway, the actress Scarlett Johanson and her husband had just split up. As part of her commentary on the event, and I believe hinting that Scarlett's husband somehow resented her fame, Joy said something like, "She's a celebrity; he's not. You know how relationships go--one person is the stem and the other's the flower. He wanted to be the flower."

Her words got me thinking about my own relationship. I feel incredibly lucky; Mike is a sturdy stem. We met at a meeting of the Henderson Writers' Group and from day one, even before the sparks started to fly, I knew he would be a solid source of support for my writing. When I'm performing, there's nothing like knowing he's rooting for me in the audience. And once I'm off stage, he offers thoughtful critique that is truly constructive, as if my success is his as well.

I love the metaphor, but one partner shouldn't always be the stem while the other is the flower. To be fair, the roles must be reciprocated. Though it's not as obvious to the outside world, I'm the stem to Mike's flower, too, and I love playing that role. It's an honor to serve one's beloved, no?

But what about people who aren't in a relationship and have no beloved to serve them? Are their flowers without stems?

Hell, no!  Your support doesn't have to come from a significant other-- friends and family can be your stem, too.

You wouldn't believe how many people are pulling for you, how many people have their fingers crossed for your success. And maybe you've never even laid eyes on some of those people, maybe you know them only from Facebook or the blogosphere.  (I think about a blogger in New Jersey every single day.  I don't even know her first name.)

My point is, so many people are on your side; we want you to win.  Because when you win, everybody wins; we all get to enjoy the beauty of a flower. 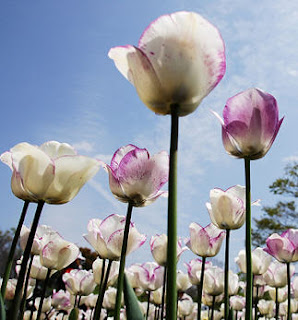 That is so true. I love this, who knew that something as simple as a flower/stem metaphor could make a person feel so much better about their role in society.

I agree with you 100%, in any type of relationship including friends, the roles should be equally reversed. Nobody benefits from greed.

The sooner everyone learns that the sooner we will all be at peace and unfathomable happiness.

What a beautiful post! You are my stem in many ways, too!

Thank you for this lovely post. i'm having a little bit of a rough time. it's nice to remember that there are people all over the place pulling for me.

And i'm pulling for them too! life is good

This is the coolest analogy! I also loved the picture of the tulips.

You amaze me often with your writing. You should be much more recognized then you are! We have to figure this out!!

Agreed! I'm lucky and have a great stem. But, I'm his stem as well. We compliment each other and help each other. We let each other flower as well. And, many around me (in blog world and computer world as well) are my stems and I'm theirs. It's nice to think about.