You may find this hard to believe, but earlier this week I gave my 30-day notice on my beloved Linda Land, the amazing apartment I've been renting since February.  Linda Land began as a place to enjoy some peace and quiet when I was living in my boyfriend's house with his young children, who were there at least half the time.  Then in early May, we broke up (for good, I said!) and I moved out completely and Linda Land became my full-time digs.

Oh, how I love Linda Land, with it's amazing view of the entire Las Vegas Valley, the balcony, the pools and hot tubs... and of course, my shabby-chic decor.   I took this video back in June.

My sister Lori couldn't freakin' believe my apartment when she was here a couple of weeks ago.  I told her I could feel the winds of change, though, and Linda Land would be time-limited.  But I assured her I wouldn't give this up for anything less.

I saw online that the house I grew up in at 8 Lincoln Avenue in Albany is for sale.  That's the one I mention in my book, with five kids, two parents, a dog... and one bathroom. 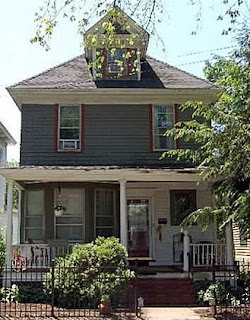 Yep, seven of us in 1160 square feet.  And now I'm moving into a house more than three times that size.

You never know how life is going to twist and turn.  If you'd told be a month ago I'd be living in a house like the one I'm about to move into, well, I probably wouldn't have been too surprised.  But if you told  16-year-old Linda Haber, the skinny cheerleader/bus driver's daughter from Lincoln Avenue, that someday she'd be a author and comedian living in Las Vegas in a freakin' a "Beverly Hillbillies" house complete with a cee-ment pond... I think it would have been out of the scope of her imagination.

So how did this all come about?  How did I go from sleeping on an air mattress in 1-bedroom Linda Land to a place like this?

You know, in the three years I've been writing this blog, I don't think I ever left you with a cliff hanger.  Until now.  Tune in Saturday!

you have your moments! ha ha

Lookin' good, Linda! Keep movin' on up. One day, you'll touch the stars.

you got us waiting...can't wait to hear the latest!

Holy %&@(*!!$ Batman, ya done good! If I promise to wipe my feet, not touch anything and bring beer can I come for a personal tour? I'll wear my tiara.

Of course! And I know you'll bring good beer.

Which bedroom is mine? Read your email woman.

Good thing I'm off Sat. The suspense will be killing me. Can we get an approx. time on the post sat. :)

I am so happy for you. It looks so beautiful and I hope you are going to be just as happy in your new home!♥