Ahhh... Christmas is over

Holy crap, I am late as hell posting this.  It isn't the first time I got messed up with the Monday holiday.  Though strangely, I posted yesterday.  Super.  I can't figure myself out.

Well, we survived another Christmas.  Long-time readers know that isn't one of my favorite holidays.  But it's over now and that's the important thing.  This one was different; because my family was here for Thanksgiving (and the surprise wedding), I decided not to go to Albany for Christmas.  There's been only one other year that I didn't go back east for Christmas--when B.H. and I spent the holidays in New Zealand. Someday I gotta tell you my impression of N.Z.

Anyway, I was happy to spend Christmas with Mike and the kids.  We decorated my awesome palm tree and totally used it as our Christmas tree and the kids didn't care a bit.  As long as there are presents under something.

In February, I'm gonna put hearts and crap on it and in March... shamrocks.  You know it.

The 7-year-old got a new bike--her first bike--and guess who forgot how freakin' exhausting it is to run next to a kid learning to ride a two-wheeler with no training wheels?  I totally counted it as exercise--duh--even though I had to stop about every 30 yards because I thought I was having a stroke/heart attack combo.  I am so out of shape.  Yeah, that's at the top of my New Year's get-my-shit-together list, which is now about a mile long.

Hey, speaking of... I saw on Facebook that one of my dear readers, inspired by my Purgefest 2010, is having her own Purgefest 2011.  Awesome!  I'm so proud!  It feels so good to get rid of crap.  I'm down to the bare bones myself--which feels fantastic--but my husband is a different story.  He's making progress, though; we can almost fit my car (which is roughly the size of a coffee table) in the (three-car) garage.  Just saw this on Facebook a couple of minutes ago.  How a propos. 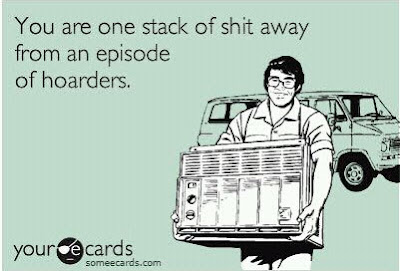 What else... Oh, I am now the GRANDMOTHER OF A FREAKIN' TEENAGER!  Yep, yesterday was my man Connor's 13th birthday.  Holy freakin' shit!

Hahaha!  Hope you're enjoying your week!

I had a laugh-out-loud moment when I read in your post about Connor being a teenager at 13. Which, on the surface is not funny in the slightest. However, it reminded me of a great conversation I had with Todd (of the ex-orange hair Todd's) about teenagers and how he considered 12 year-olds to be teens. Yes, I still laugh at him for that one.

Ask him about it when you see him next.

Sounds like an exhausting but fun Christmas! Your mom is one adventurous lady! I hope she enjoyed the helicopter ride.

I am glad you survived Christmas. So did I with my kids coming here Christmas Eve morning and then traveling up north. Then Christmas Day traveling to my sisters and then home in time for the Packer game!♥

Make that 2 readers who've been inspired to do a 2011 Purgefest! Mine starts today, which leaves only 4 days, but 4 good days!
Are you sure you're the grandmother, lookswise you could be the mother.
Your mother is hilarious, now I know where you got it from!

OMG I love your mother.

Merry Christmas, Linda Lou!! You crack me up and I see you come by your humor naturally as your mom is feisty, too!

Christmas wasn't the same without you here in Albany, just saying. I do love your palm tree though. It is soooo you! How do you chase after the bike with 3 inch heels on???