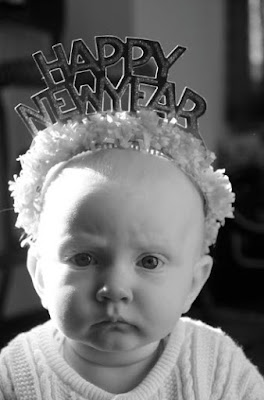 Remember this photo of Hazel from New Year's 2010?  I am soooo hoping Courtney takes another one of her this year.

Usually I don't go out on New Year's Eve.  Except New Year's Eve 2008 when I partied with my girl Lisa Gioia Acres and an ex-Playboy Miss July and an ex-porn star at Santa Fe Station.  This year is certain to be a little more mild, but you never know.  It's mine and Mike's first New Year's Eve together (every other year I've been back in Albany for the holidays) and we do have some swingin' plans.  No matter how the evening turns out, I'm thrilled to have him to kiss when the clock strikes twelve.

Believe me, I've had many years with no one to kiss at midnight.  Wait, that's not quite true; I've kissed friends and family, but you know what I mean.  I think everyone, whether they want to admit it or not, longs for that celebratory romantic kiss to ring in the New Year.  Back in September I wrote this post, Why wouldn't you put as much effort into finding love as you would to find a job?  If finding love is something you'd like in 2012, I hope you'll put the effort into making it happen.  And that goes for no matter what you want for yourself this next year.

I wish every one of you a safe and fun night tonight.  Thank you for reading my crap for almost three and a half years now.  And here's to a glorious 2012!

I like what you say about putting the effort into finding love. That's what I need to do. And this time, find the right person to love -- tired of this 'let's get married/let's get divorced' thing.

Happy New Year to you, darling! You've started out the year just right with your new man!

I hope you and Mike have a great New years together. Happy New Year to both of you!

Happy New Year, I've really enjoyed reading your blog and look forward to more in the new year.
Does that child every smile? :)
Cassie