WHEW!  Mike and I just got back from our honeymoon last night.  Between Thanksgiving, our wedding party and our honeymoon, it's been a wild week and a half!

So, were you surprised to hear we got married last Saturday night?  Seems like a lot of people were!  Mike and I had been talking about gettin' hitched for quite a while, and since most of my family planned to spend Thanksgiving in Las Vegas anyway, we figured that would be the perfect time.

Here's the gang pre-flight at the Albany Airport the day before Thanksgiving.  Mom and Stepdaddy arrived earlier in the week and my brother and his family came Thanksgiving Day. 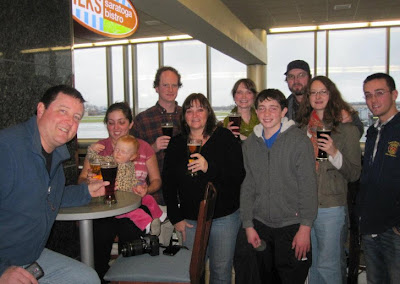 My friend Babs had a surprise wedding a couple of years ago--that's where I got the idea.  I thought it was brilliant--no gifts, no formalities, no expectations.  All anyone had to do was show up.  Everyone thought we were having a regular old house party, a little get together in our new place so our Vegas friends could meet our families and vice versa.   But nooooo...


We told our guests to dress casually or wear whatever the hell they felt like wearing; we wanted the party to be all about comfort and fun.  I swear, I asked Mike to wear shorts and a polo shirt--his daily year-round uniform.  (People with ADD, I've learned, wear the same thing every day.)  As for me, I just wanted to find something that wouldn't make me look obese.  NOTE:  You're never at your thinnest during Thanksgiving weekend.

I told everyone the party would start at 7:00, and to be sure to be here by 7:45 for "the Amway presentation."  Oh, Linda, you're such a stitch!  My friend Reverend Janet was scheduled to arrive at 8:00.  The only people in on the secret were my kids, Mike's kids, my sister Stacie (who had to fly in from Virginia and wasn't originally going to come for Thanksgiving) and my sister Lori.

Thank God for Lori!  She not only handled all the food for Thanksgiving dinner, but for the party as well.  I swear, I am so bad with food--the first time I knew adulthood was going to suck was when I realized I could no longer swing a party with a keg and a few bags of Doritos. I did, however, ensure there was a wonderful assortment of beer and Two Buck Chucks for the wedding.  I know--very classy.

People started arriving right at 7:00 and by 8:00 we had a packed house.  I think I counted 61, and I feel so bad because I totally forgot to invite a couple of my friends.  Really, I hate that.  Janet arrived shortly after 8:00 and after we settled the final details, Lori corralled everyone into the living room.

Lori got everyone's attention and started by saying we had a special guest with us tonight:  Janet Miller, my friend who officiated at our mother's wedding at the Tropicana in 2006.  Mom and Stepdaddy were surprised and happy to see Janet; she'd done a beautiful job with their vows.  Then Lori said that Janet also did her and Russ's surprise 20-year anniversary renewal ceremony I arranged for them at the top of the Stratosphere two years ago.

Janet took over from there.  She said something like, "When Linda called me for Lori's ceremony, I told her I thought she was calling to say she was getting married.  But Linda said, 'Never again!'  Well, never say never... This is not just a house party--you're here for Linda and Mike's wedding!"

My daughter, Courtney, started things off with one of her beautiful songs. 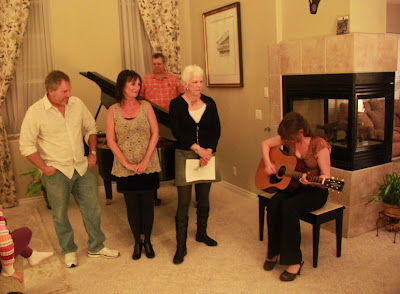 Then Janet performed a touching ceremony.  Seriously, if you ever want to get married or renew your vows in Vegas, let me hook you up.  Janet is the best! 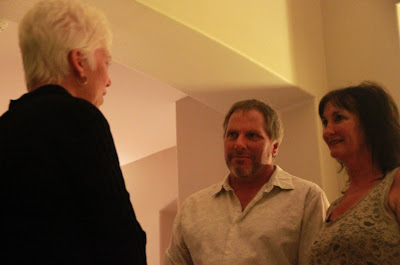 This was so funny--when Janet asked Mike for the ring, he was like, "Oh, the ring!" and ran out of the room.  Yep, he forgot the ring.  That's my Mike!

My son, Christopher, sang one of his songs next, backed up by Courtney's husband, John.  Mike's 11-year-old son Sean closed out the ceremony with an original composition on the piano.  What a joy it was to have our kids share their music at our wedding!

With the ceremony done, it was time to party.  And in our family, it's not a party without music by Talking Heads. 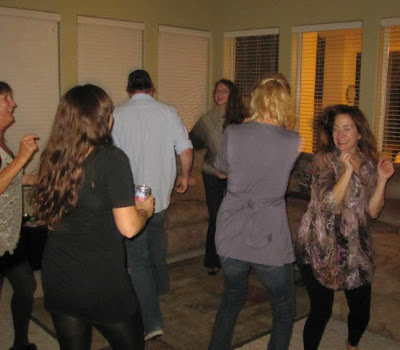 Wedding cake for us?  Hell, no--cupcakes!  And no, we didn't smush them in each others faces--why start a marriage with a fist-fight?

As usual, people like to congregate in the kitchen.  This was toward the end of the night--at one point, it was so packed, you couldn't move. 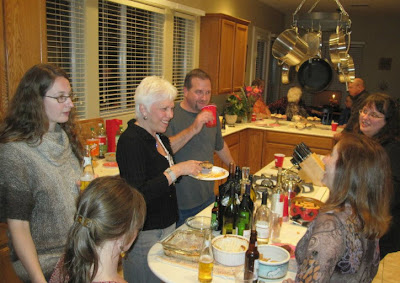 I think the last of us went to bed around 1:30.  We were so psyched that we were able to pull it off so well--everyone was truly surprised.  Really, it couldn't have gone any better.  So happy!

This was the first time my and Mike's kids met, and the two families blended beautifully--after all, my kids are in their 30's and his are still so young.  Besides his children, Mike just has a sister in Florida, and now they all of a sudden have this gigantic family to deal with.  It was so cool to see our daughters so happy to finally have sisters!

Everyone went back to Albany and Idaho on Tuesday, and Mike and I left for our honeymoon that afternoon.  It was spectacular--I'll tell you about that next time.  In the meantime, thank you for all your best wishes! 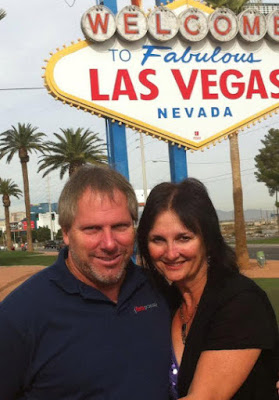 Oh what a beautiful time for everyone...Congratulations!!!!

Congratulations! I love it!

I was there! I'm so happy to say that I was there and it happened just as Linda said...incredible night, incredible wedding and happiness for a wonderful friend!!

Tears in my eyes:) I am sooooo happy for you! What an incredible way to throw a wedding. Congrats and Hugs!

Congrats Linda I am so happy for you. xoxo

sounds like so much fun! thank you for sharing! best wishes for your marriage!!!!

ps your home is gorgeous!!

That is just beautiful!
And the photo of you two, peas in a pod, so happy together.
Wishing you a long, happy, fun-filled future together.

I am so happy for you that it turned out so great for both of you. Also the kids getting along so well makes it even better.

It sounds like everyone had a great time and you really surprised your family and everyone on here too.

My best wishes for the two of you and the kids!♥

Dang, girl! You know how to live life to the fullest, I love that about you! This looks like such a fun celebration, what a perfect wedding. And you and Mike....gorgeous, the both of ya!

I hope you have a wonderful life together with much more laughter then tears.
What a sneaky buy fun way to have a wedding.
Cassie

Whoa!!! You sneaky little devils :) Best wishes to you both!!

Congrats! Such wonderful news! I am sure everyone was so excited! PS I love your living room!

you look so beautiful and happy. best wishes my dear - I am so very happy for you.

btw I knew he was a keeper years ago!

Congrats on pulling off a surprise wedding for your friends and family. May you and Mike live happily ever after.

The only thing missing was me. :(

So happy for you! Love you guys!

Mega congratulations to you and Mike. What a wonderful blog post and a terrific way to segue into the new year.

You are a special person and deserve all of the happiness life has to offer.

How totally cool. What a great way to get married!! I got all teary eyed reading about it. I love to see people so happy!! May your life together bring so many joyful moments that your tummys ache from happy laughter!
CONGRATS!!!

LOVED IT! And yeah, you have a beautiful home ... I B jealous LOL!