Real life does NOT start yet!

For most people, the holidays were officially over yesterday and it's back to real life. Not for me. I'm in Albany until January 8, so real life will resume for me next Wednesday, January 9.  I am able to work while I'm here, but by no means do I feel like I'm on top of all the other aspects of my life.

I have GOT to get my shit together, people. It's hard when you're traveling and eating and drinking and not walking because it's like 20 degrees out and the wind is blowing and even though you can go to the gym with your sister you don't because you can't friggin' stand gyms. You know?

On New Year's Eve Courtney, Hazel, and I stopped at the beverage center to pick up some beer (duh).  They had a Christmas tree in the middle of the place, and Hazel's standing there in her snowsuit looking at it and clapping.  Courtney says, "She's trying to turn it on and off. Our tree at home is hooked up to a Clapper."

"You might be a redneck if your 2-year-old granddaughter tries to clap on the Christmas tree in the beer store..."

Look at this photo I stole from Courtney's Facebook page.  How freakin' cute is that little Hazel? 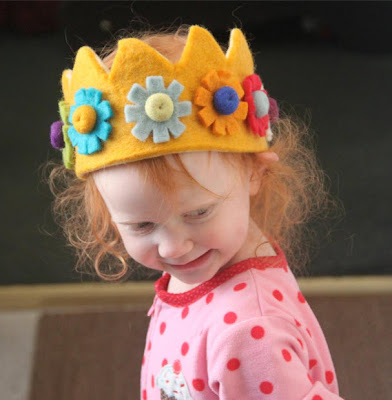 I am mental for that kid.  It's SO great to be here, but I was bummed not to kiss Mike at midnight on New Year's.  I miss him!  I'll be back in Vegas before I know it and then will be missing all my people here.  It's so hard being away from them all.  I'll post more pictures when I can--my iPhone is crap when it comes to taking photos inside, so I have to get them from other people.  And God knows I don't want to go outside when it looks like this: 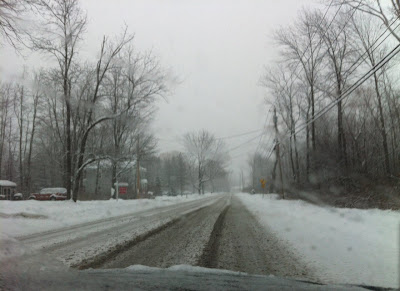 OMG, I so do not miss this stinkin' weather.  I have to admit, though, there's something about stopping in a neighborhood bar with your sister on a snowy Saturday afternoon. 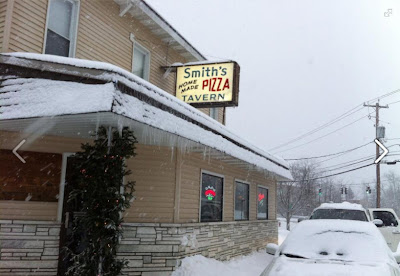 So yeah, if it snowed like one week out of the year, I might be able to handle it. Other than that--forget it.

It seems that 2012 was a tough year for a lot of people. I have so many friends who were confronted with health issues--I feel lucky that the only negative in my year was being out of work for 6 months.  The Bell's Palsy event was weird, but that came and went within three weeks--nothing to complain about.  But I think the overall collective vibe is good riddance to 2012 and let's hope 2013 is a lot better.

Home cooked Food.
A trip to Mt Charleston to play in the snow.
Hanging out with the loves of my life.

Holidays have been kind to me this year.

Having trouble re-adapting to work life again though.

Lol if it snowed for one week of the year!! Linda, never move from Vegas!
I enjoyed 2012 and had a good one, lots of fun and met lots of new people. I intend that 2013 will continue in the same vein!
I do like your 2 snow pics!

"You might be a redneck if your 2-year-old granddaughter tries to clap on the Christmas tree in the beer store..." Freakin' PRICELESS, Linda! That snow looks yucky -- could never endure that. I don't come from hardy stock.