One night I was hanging out with two other comics before our show at the LVH and one of the guys said, "Today I saw a woman with the worst ass implants ever!"

I thought he was kidding.  Ass implants? Who the hell would spend good money for something that could be achieved much more economically by a daily diet of Milky Way bars?  They assured me that buttock implants are not unusual these days. God help us, ladies, have we not spent our entire lives logging thousands of hours of Buns of Steel and trying not to eat total shit just so we wouldn't get a fat ass?

"Are guys really attracted to a woman with a big ass?" I asked.  They glanced at each other and smiled. Now, I'm shallow enough that if they were two blacks guys, I'd say, "Yeah black guys are into big asses. Not a newsflash." But one was a big black guy in his late 40s and the other was a little white guy in his 30s, and they both went on and on about how important a meaty ass is.  Wow, that was a real eye opener.

I should have known, since the most popular ass in history belongs to that no-talent Kim Kardashian. The appeal of the entire family is a mystery to me, but I really don't get why that big ass is attractive. Plus, she's only 5'2" tall!  That's a lot of bulk for a woman of that height, no?  And now that she's pregnant... it's only gonna get worse from there.  Yikes.

God knows I'm full of myself and you know it, too, so I'll be honest.  I've always thought I had a great ass, like it was always one of my best features. (Sure as hell wasn't my hair...)  I even had a boss tell me I had one of the all-time best asses on the planet (before all that killjoy sexual harassment crap came into vogue).  Unfortunately, that was about 25 pounds ago, and even though right this minute it's bigger than ever, I'd say my ass is still pretty decent.  But I don't want it to get any bigger! If it starts to creep into Kardashian territory, I swear I will start drinking Coors Light (!).

Ever since J-Lo made the scene it seems to be all about the ass.  You never hear about a celebrity with a great set of knockers anymore... who's the modern day Susan Sarandon or Adrienne Barbeau? Huh? 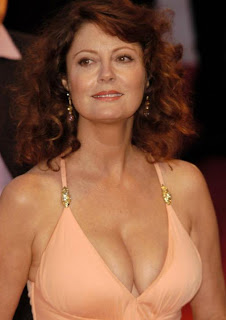 So guys, I'm curious.  Do you go for the Kardashian-sized variety, or for a much smaller model?   Is ass the new tits?  Or are you satisfied with a nice rack and the ass is secondary?

And ladies, it seems we now have one more body image issue to worry about.  Now we need to have a "Goldilocks ass"--not too big, not too small, but just right.  Splendid.

Linda: Now HERE'S a post that'll really bring out the menfolk! You'll be fightin' 'em off....
Yeah, I really like a nice rear view. But what's up front counts too. But it's a package deal -- I also like a cute face, lotsa hair, a warm personality, a woman with a brain in her head & a sense of humor....
(Sorry if I used "But" too much in that last sentence, but ... well....)
It's also easier to stare at butts than racks -- less chance of getting caught admiring.
REALLY nice photos of Kim & Susan, BTW. Should up your male readership ... so to speak.
Notice you didn't put YOURS in there....
Keep laughin'!

A big fat ass is a turnoff for me, but what do I know?

I'm trying to minimize the size of that thing that follows me around.

It's a slow-ass process, I'm telling you.

I will always be a rack man. Not sure why, but in the 20 or so years that I have been dating, tits have always been my favorite feature. It was a major reason why I started dating the women who is now my wife. She knows it.

This is going to sound shallow as hell, but I am going to say it anyway. A nice rack only works for me on a women that is not overweight. I need to know that if you were at your ideal wieght, you would still have a nice rack.

This is not to say that I do not find overweight women attractive, because with some, I certainly do, but the question posed was about asses vs. racks. Just my two cents.

I love T, A and everything in between.
However, the T will always be more important even though in all reality neither of them are important in the least.

It's all about personality - :)

I'm loving the response here, and I'll bet that 99% of men on earth agree with grrouchie--it really is about the personality. Well, mostly.

PS -- This whole "body image issues" area is a real minefield -- which unfortunately women take MUCH more seriously than men, whether due to societal pressures or fashion or whatever. As long as a woman Has The Parts, most guys likely won't complain much. Remember what Julia Roberts said in EAT, PRAY, LOVE:
"In all your vast experience of taking your clothes off in front of gentlemen, have any of them ever left, or asked you to leave? No. You're naked and you're in the room -- they've won the Lottery."

Yes, women are way too mental about body image. And you're right--if we only knew how little men actually give a shit about everything we fret over. We're a bunch of kooks!

I don't get it either. A big ol ass like Kim or J-Lo's used to be cause for ridicule. I think their butts look abnormal. But then, I'm not a man.

I have really wondered how big butts went from being a potential negative to a positive.

Never been a big rack man myself. I always looked for a cute face first. Of course, it is the total package -- intelligence, sense of humor, sweet personality, cute face, decent chest, nice butt.

If I ever met Shania Twain and her personality was great, I think I would just completely melt.

btw -- perhaps I got a few things in the post and comments mixed up, but if you've got a hairy ol' butt, please spare us the pictures ...

My neighbor told me she had purchased a fragrance yesterday that,"smelled really nice when I tried it on, but later smelled like B.O. at the end of the day. It was just terrible!"

When I asked her what fragrance she had purchased, she said, "Kim Kardashian." LOL!

Personally, rack all the way. you mentioned my all time favorite, Adrienne Barbeau. Truly one of the best sets of all times. As far as personality, there are two completely seperate criteria. Ogling, looks only, rack and face paramount, rest important but secondary. Marrying/long term relationship, beauty is important, but yu have to be able to get along with the woman, so in the end, personality is tops for that category. One last note, when it comes to racks, no silicone need apply.

It's all about the tits....and a small ass. Definitely.

Linda I looked at your profile pic so it looks like you were in your 20's back in the 80's so you must not know what guys in their 20's like now. I'm a guy (28) and my name really is not Samantha (just a fake name for my online profile) so I'll tell you how it is. J-Lo and Kim K have nothing to do with it. I'm an ass man over breasts any day. But I have to be clear, I don't like asses as big as Kim K and J-Lo. Just a nice curvy butt that stands out in tight jeans. Breasts are secondary for me and if a woman has a nice butt, she can be almost flat chested for all I care. Something about a nice moderate wide waist and nice curved buns makes me want to be inside a woman a lot more. Maybe it has to do with my manly subconscious nature to go after a woman who has the type of body that will bear children easier. I can't be sure what it is. But I have done some research on why I like a nice ass so much and that's what I've consistently found online, about a mans subconscious primal instinct to go after women with a body that has a baby bearing body (wide hips, curved ass)