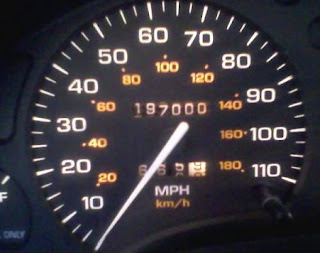 
I’m the first to admit I have a weird emotional attachment to my vehicle, but it’s only because I have the most awesome car on earth. It’s the first new car I ever purchased entirely on my own. I bought it in 1996 after my first divorce and since then, I’ve gone through a whole other husband and, of course, innumerable boyfriends.

My car is cute as hell—it’s a two-door coupe about the size of a kitchen table—and at last count I got 41 miles to the gallon. I’ve never had a problem with it (knock on wood), even though the “Service Engine Soon” light flashes on now and then and another red light on the dashboard has been blinking for like a year or so. I assume it’s nothing to worry about.

The guy at Big O Tires pitched a freakin’ fit like last time I pulled in without a drop of oil in my tank, so now I do have to put oil in the car, but because I don’t actually know how to check the oil, I use my psychic powers to determine just how many gallons to pour in at a time. I really have no idea what’s going on under the hood (maybe I’m not even putting the oil in the right place—who knows?) I just know my car runs perfectly (fingers crossed).

Men don’t seem to share my enthusiasm for my beloved Saturn, probably because it’s terribly uncomfortable for anyone larger than my 5’4” frame, but maybe also because the roof is a little dented from when a tree fell on it back in 2000 or maybe because I never wash it. (Men are into washing their vehicles.) (Whatever.) A guy I was dating once said to me, “Linda, I love everything about you except your car” and I thought, “Newsflash, dude: This car will sooooo outlast you.” Of course, I was right.

“Love me, love my car,” I say, though I definitely have a double standard. If a guy picked me up for a date in such a shitbox, I’d be like, are you out of your freakin’ mind? The only way I could get past it would be if he had a cool British accent. Yeah, I’m that shallow.

I probably shouldn’t brag about my Saturn; I probably should be mortified that at this age I’m driving a dusty 12-year-old vehicle with a dent in the roof--not exactly the picture of success. (My friend Joey D tells me his neighbors must think the maid is there when they see my car parked out front.) But I love my car and I’m not about to give it up, and in 3,000 miles, I’ll be having one hell of a celebration.

One of my best buddies has a Saturn like that, too. His first one had about 130,000 miles on it when it started acting up, and when he took it in they said that it would need a new timing chain, a $2500+ repair.

So he took it to the dealer and got $3000 for it as a trade-in, and came home with another new Saturn that afternoon. That was seven years ago.

BTW--make sure you check the oil! Especially on a car that old--you gotta check it all the time, otherwise you'll be sitting on the side of the road, hoping your insurance has roadside assistance coverage.

Well I could have written a very similar post. My car experience is eerily similar. I put oil in my car and put it in the wrong place. Even I was shocked at m,y own stupidity. I only learnt how to put air in my tyres this year. And as for washing my car, well water is too precious here.

Oh and I'm that shallow too.

Now I want to know about your book. I caught a glance at its title on your blog. Strangely, I am writing a book about my ex, the sociopath, several steps up from the bastard. Oh and he was British...

Where can we get your book?

As of now, my book is still in manuscript form. I've been querying agents for over a year, but as you may know, the publishing industry is very tight these days and is generally unwilling to take on unknown authors, however brilliant (ha!). I'm considering self publishing because I think it's a great, funny story and I want to get it out there. Perhaps publishing in Australia is different--I hope so! Good luck to you!

Wow, good for you! We won't talk about the land yacht that I drive, that costs me the equivalent of a mortgage payment every month...

I think me, you and Lilly could co-author a book on whackjobs we married. Wouldn't that be fun?

There are so many exciting things going in your life. I'm crossing my fingers for you!!!!! I'm looking forward to meeting you for lunch. I have a feeling we are going to become good friends. I love your style!