Five thoughts about my current state of life:

1. I woke up this morning to the sound of a chainsaw cleaning up from this week's snowstorm. In Las Vegas.

2. I think my comedy set was only so-so last night; it went over fine, but I learn something every time I go on stage and there's definitely a lot of room for improvement. The crowd was great, though.

3. Two of my writer friends are having (separate) book signings today, so this afternoon I'm going out to support them. One will be at Borders; I should pick up that Chicken Soup for the Soul book that I have an essay in.

4. I'd like to finish my next Living-Las-Vegas column today, but I may not get to it until tomorrow.

5. Sometime soon I need to draw a line in the sand and decide whether to continue pursuing representation for my manuscript, Bastard Husband: A Love Story or go balls to the wall and self-publish. Hmmm... that title. I'm still not sure if it's right.


Not too long ago, back when I was in Albany, NY, (where I lived for the first 43 years of my life), I would have looked at those statements and thought, "Wha-what-WHAT?"

Who could I possibly be talking about? I live in Las Vegas? I have writer friends? I'm a writer? I do stand-up comedy?

As the kids say, WTF? As the Talking Heads song goes, "You may ask yourself, well, how did I get here?"

The answer lies in one of my favorite movies of all time, What About Bob? It's right there in the title of Dr. Leo Marvin's book: Baby Steps.

For the most part, your life is a reflection of the baby steps you've taken and the choices you've made--more specifically, the actions you've chosen to take. None of this stuff happened magically for me; for example, let's examine my path to the stand-up stage. 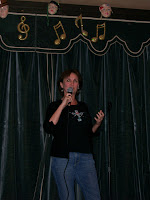 I perform stand-up comedy these days because one Sunday night I chose not to be a pathetic, lonely freakin' two-time divorcee (I hate that word) and instead of staying home to watch The Simpsons, I chose to go out by myself and check out an open mic stage in the back room of a bar on the west side of town. A few months later, after choosing to go back week after week, I chose to sign up to do a set myself, even though it scared the crap out of me.

Then I chose to stick with it--on and off for a while--because in the meantime, I chose to take similar baby steps on my path to becoming a writer: I chose to structure my journal writings into a memoir, with the help of the Henderson Writers' Group, which I chose to join. Blah, blah, blah... you get the picture.

So, with the New Year approaching, this is a good time to think about the path you're on. Is it the right path for you? What types of baby steps are you going to choose to take during the coming year?

Oh, one more thing. I've had two interesting developments lately that I don't want to talk about too much because I don't want to curse myself. One of them was alluded to yesterday on my friend Lisa McGlaun's blog. It may turn out to be something cool, or it may turn out to be nothing. At any rate, check out Lisa's site--she's a beautiful person and a really neat chick.

Hello again! I like baby steps--I'm taking them now. At 50, I want to change the work i do--and end my working years doing something meaningless to the soul and heart but something gives me pure joy. i'm in the a field of work of how i grew up and quite frankly--I dont think I'm good at it anymore--my heart and soul are weary.

I've started to teach myself how to make homemade body products and skin products. long way to go--but theres that first baby step. neat thing is--I dont care about making money --yet. makes a difference in how you do things!

I know henderson..i have a lady freind that I've met the last two trips to vegas...she's pretty popular and busy out there. Vernalisa...i will be back in May!

Good for you, Dawnie! I'm a firm believer in "do what you love, the money will follow," though the truth is, I'm still sitting in a cubicle every day doing work I hate. I feel a prison break coming soon, though!

Be sure to let me know the details of your trip to Vegas--I'd love to meet you!

OMG, this is the 2nd post in a row that I've read with "balls to the wall" in it! Clearly, I need to use that phrase in mine!

I love the idea of you doing stand up! I used to emcee a Male Revue and I had to do about a 5-10 minute monologue after their opening while the first dancer got ready, and I loved it. (That was in my younger, funnier days!)

Next year I'm just going to kick the real estate business into gear and start making money to pay off my bills and help my child with college tuition. Oh, and for travelling money.

I always admire women who just take that step out past the safety barrier. Specifically women as quite often they hold back for a variety of reasons.

Stand up comic - now that takes courage. Sort of like free falling without a parachute. That is pretty impressive.

Your very brave!!!! I can't imagine doing stand up but I'm definitely going to come watch you one night soon!

Hey, I called the Royal Resort on Friday asking if they had a comedienne performing that night, and they insisted that there was no female performing in the lounge that night.

I was gonna come down and see your act, but I was denied.

@ Carmen: You're right, stand-up is scary as HELL!

@ Mikey: That sucks! I would love to meet you. Next time email me directly to confirm, but if the dates are posted on my site, I'll definitely be there. If I'm not, call 911.

I'd like to email you, but I can't find an addy or a link anywhere on the site.

Help a brotha out!