More things I couldn’t make up about Courtney, in honor of her 31st birthday 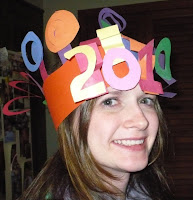 Yes, Courtney Blackwell Rice is 31 today! I should say that her brother turned 32 just three weeks ago, but since Christopher’s a private kind of guy, I let him enjoy his day out of the spotlight. Court, however, is more “out there” like me (the acorn didn’t fall far from the tree), and so there’s no way I’m passing up the opportunity to roast her a bit.

If you've read my previous posts about my daughter, you know she's a trip and a half. Today I want to share some little known tidbits about our girl's early years.

1. Courtney wanted only one thing for her kindergarten graduation: a slave.

2. I swear she used to yank her teeth out just for the bounty from the tooth fairy. She’d want something in the store and if I said no, then lo and behold, the next day she’d present a tooth so she could buy it with her own money.

3. When she was a tiny kid in the car seat, she'd push her little plastic horn and shout, “Beep, beep, asshole!” I don’t know where she learned that.

4. A few years later, I heard her say, “You asshole children!” behind her closed bedroom door, and in the most authoritarian tone. I busted in to see what the hell was going on to find her in one of my dresses standing at her chalkboard. “What?” she asked, so innocently. “I’m just playing school.”

5. As you can see, one of Courtney’s favorite pastimes was to re-enact the classic “And that’s all I need” scene from The Jerk. 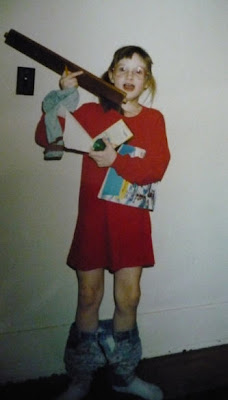 Happy Birthday, angel! (Or, “angle” as you would spell it.) I love you!

Obviously, Courtney, the fruit doesn't fall from the tree. You are quite a lady because you have been raised by the best.

Hope your birthday is filled with fun and laughter.

Ah so cute!!! Happy birthday to your daughter. She's adorable...asshole!! LMAO Love it!

MY late daughter's main ambition in her late teens was to be letterman's first human stupid pet trick. She talked backwards. "After all, after a given point, there's only so many times you can read shampoo bottles forward. I mean, it just gets boring."

Your daughter IS a trip and a half. Obviously the influence of strangers... I hope she never loses that... whatever it is that makes her uniquely Courtney. Linda Lou, ya musta done something right we these two, huh!

Although, when my uncle once said we owe all we are to our parents, i hit the roof. Our children are uniquely themselves. the best we can do is help them express that in their lives in ways that offer them happiness...

So. As I said, ya musta done something right.

Happy birthday to Courtney AND belatedly to her brother.

Just wanted to drop a note to thank you. For years I've wanted to have a blog about poker. I've tried in the past and given up. Your post made me think about what I wanted to do and it made me do it! I've been blogging regularly and I'm really enjoying it.

Thank you! I know I've told you this before, but you inspire me.

Hahahahahaha....I swear when I was out there last year and we were in your Saturn I heard you say the exact same thing....beep beep, asshole. ROFLMAO!

yes, where DID courtney learn to call other drivers assholes? i'm sure this comes in very handy for her these days! i live in new jersey, so i'm highly familiar with assholes on the road! go, Courtney.

you and your daughter have such a wonderful relationship. good work!

Your daughter is a doll!!