Whew! Right now I'm in a Day's Inn on Route 66 in Kingman, AZ, less than 100 miles outside of Las Vegas. Yep, this is as far as we got on our first day of travel. No, I should say, our first night of travel. We finally got packed up and out of my apartment at 10:45 last night and then instead of being sane and hitting the road right away, we went to Emerald Island Casino in downtown Henderson, where I lost a dollar and Lori picked up a quick 30 bucks for the trip. So it was minutes from midnight when we finally got on the highway, and it was nearly 2 a.m. when we checked in.

Doesn't my dog, Stiff, look cute in the back of the car? 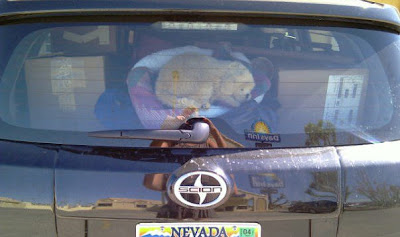 Man, moving takes a lot more time than I remembered! I honestly don't know what I would have done without my dear BFF Kri and my strong-as-bull sister Lori. The entire move was fueled by girl power! Mike and I are moving simultaneously or he would have helped, of course. And his move is a nightmare--the contents of a huge house.

Despite my best efforts at Purgefest 2010, my 5x10 storage bin is filled to the brim, and I'm sure that whenever I look at that stuff again, I'll throw more than half of it out. And I should--as I took one final look at that stuff, I thought, "The set designer from Sanford and Son called. He wants his junk back."

Well, better get back to the road. First stop will be the Kingman Harley Davidson shop we drove by last night. I'll be posting photos as they happen on my Facebook page with my new phone, though because I'm such a freakin' techno-spaz, I either don't post what I think I'm posting or post the same thing a hundred times. So be patient with me.

Jeez, that works on so many levels.

Hey, I had breakfast yesterday with my dear blogging buddy Julie from 47 and Starting Over. It was SO wonderful to see her! She lost like 30 pounds since we got together last May--she looks amazing! (I, however, don't look so hot--this is how I look when I'm in the middle of a move and without make-up. So. not. pretty.) 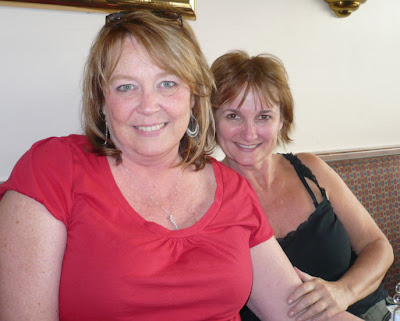 What are you talking about? You both look gorgeous! Glad you and Julie got to hang out for a bit.

I've been to Kingsman about 4 times - don't even ask why. Drive safe!!

Hi Julie...we've heard so much aboutya. Glad you got together...I DEFINITELY WANT TO GET TOGETHER IN JULY!!! Have fun...be safe...Hi to Lori....

Gee thanks for hiding your skinny ass behind me. I look like an amazon and your readers are undoubtedly thinking "if she's lost 30lbs how the hell big was she before??". No fair hiding behind me, sister. Great to see you though and finally meet Lori. I miss you already!

Actually Linda, you look gorgeous in that picture. "Sanford and Son want their junk back", snort, snicker. LOVE that line! And nothing like a change of perspective (time away) to help you purge the rest of your stuff when you get back.

You both look great without makeup!!

You both are some hot mamas, let me tell ya! Be safe Linda Lou :)