Oh, man, I had such a fantastic weekend visiting my quirky aunt Joycie and her partner, Geri, in Maine. (For the new readers, I had two aunts named Joyce; Beautiful Aunt Joyce died last year.)

So you know from yesterday’s post that I arrived wearing my tiara. Friday night we just hung out. Here’s Joycie showing off her tattoo. It’s a sea horse. 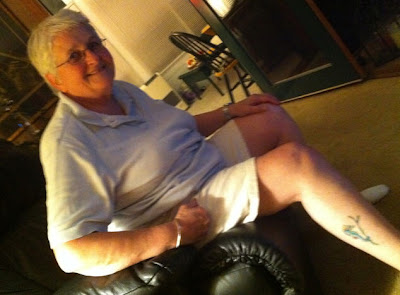 I’m not much into tattoos and I almost gave her my “What do you think that’s gonna look like when you’re 80?” lecture that I give my friends’ kids, but since 80 is only 8 years away for Joycie, I bit my lip. Plus I figure it’ll probably look pretty much the same.

Saturday morning both Joycie and Geri had to work, so I enjoyed having the house to myself and was psyched to take a nice, leisurely shower. Until I saw this friggin’ thing hanging in the corner.

Helloooo, Joycie!? Did you forget about my bird phobia? The thing is, I was already naked when I saw it (sorry about that visual), which made me feel even more vulnerable.

Anyway, my cousin Kelly came up from Plum Island and took me out to breakfast. She’s such a doll. Here she is between Geri and Joycie. 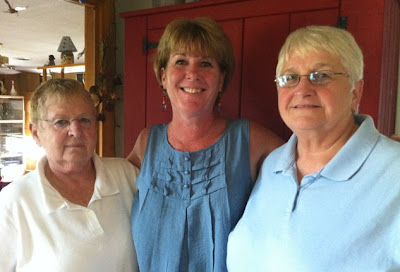 Afterward we went down to Wells Beach for a while and sat in the sun on the rocks. 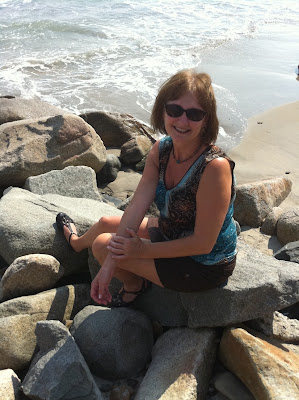 What a gorgeous day! 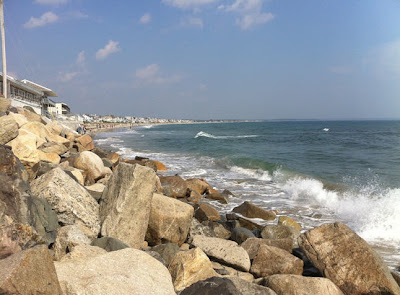 In the afternoon we took a drive up to Kennebunkport, which is only a few miles from Wells. Here’s a shot of Daddy Bush’s house, or “where the enemy’s father lives” as Joyce calls it. 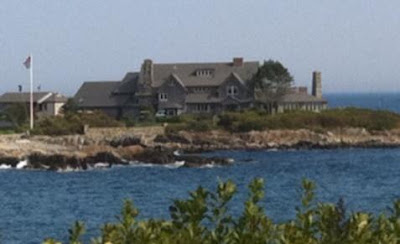 I wish I had a video of her going on about Republicans—too funny. The best part was the end when she spat, “and their wardrobe SUCKS!”  Sorry to any well-dressed Republicans out there; Joycie is really the sweetest person on earth.

At night they took me out to dinner and I swear to God, the seafood pasta I had was one of the top 5 meals of my life.  Seriously, it'll be one of the things that flash through in my final moments. 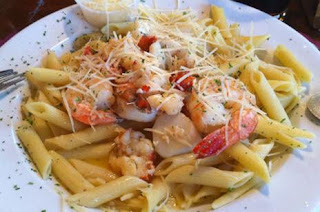 So much food! I walked around their block four times when we got home, just to get rid of some of the calories. It was delicious for breakfast the next day, too.

Joycie and Geri are awesome hostesses. Look what I found in the shower on Sunday morning. 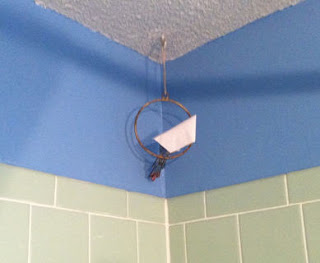 So considerate, huh?  They know I didn't want that goddamn thing looking at me.

Sunday was gray and gloomy, so I hit the road around noontime. Here’s a pic I took around York Beach. 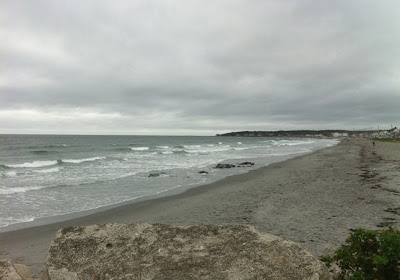 As luck would have it, my buddy Chief lives just off the 495 outside of Worcester, so I stopped in to see him on my way back to Albany. You may remember Chief if you read my book. He’s my friend who was visiting Vegas the first time I did stand-up; afterward we went to ghostbar. 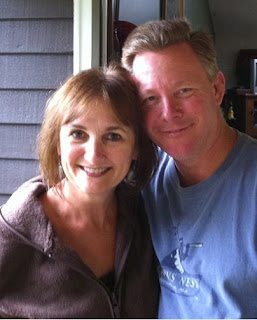 Chief’s a freakin’ blast and is so damn cute; it was great to see him.  And if any women think there are no nice, straight, unmarried guys left in this world, you are so wrong!

After a nice visit, I was back on the road. I love the road, even by myself (the tiara helps). I finally got a plug-in thing so I can hook my iPhone up to my car stereo, so I listened to Warren Zevon Radio on Pandora almost all the way. You won’t believe it, but I still don’t have any music downloaded to my iPhone yet. I’m not that swift technologically—that’s a job for Mike when I get back to Vegas in November.

Anyway, I got into Albany just in time for the season premiers of the Sunday night cartoons on Fox. Aaahh... the perfect end to the perfect weekend!

oh you made me miss Maine soo much. I havent been there since I was a little girl, but we had three families that would go every August to Wells. It is so beautiful up there. thanks for sharing!!
and by the way, can you fix me up with your friend? there are also nice, sweet females out there too! LOL

I have always wanted to go to Maine. There is a wonderful bed and breakfast I'm dying to try out.

I am LAUGHING OUTLOUD hysterically over the bird's eyes being covered! HA

But, Linda, what about the Sunday night premiere of DEXTER?? That should make you feel all warm and fuzzy.

what a gorgeous trip -- i love the photos. you make me want to run to Maine, such a wonderful place. in the summer!

i love Joycie and Gracie -- i laughed so thru this post.

thanks for sharing the joy.

I've got to say, Chief is indeed a cutie. And I would like a closer look at Joycie's tattoo. And a plate of that lobster pasta. And a look at that anti-republican rant. That trip had excellent fly on the wall potential, and it was so nice of Joycie and Gracie to cover up their bird for you.

Linda Lou, thanks for advertising me on the blog. With kind words like that......

Dear tiara toteing, comedic cousin Linda Lou,
Before you post another picture of me I would appreciate the opportunity to review photo. Obviously I wore the wrong top for the ocassion! I love my mom and Gerry very much BUT (and I mean this with no disrespect to either) My 'baby girls' appear to be sagging as low as their's! Just as I was feeling ok with my body, I have now developed a complex and am considering going back to therapy! OUCH!
Remember our conversation about having a family reunion? Remember we thought twice about it? Remember I told you I would want to 'beam' each member in and out of town to have an 'assessment' evaluation as to whether or not I actually wanted to re-connect? Remember I said (since not having seen you since 1993) you passed the assessment and YES I would love to spend more time with you in our old age? I think you need to beam yourself back for re-evaluation!!!