One of the things I love about Linda Land is I get to see my possessions again.  As you may recall, I moved in with Mike in November when I came back to Vegas after my epic road trip with Mom and my sister Lori.  The thing is, when you move into someone else's house, you're... well, in someone else's house.  Like all their stuff is already in it; you look at their decorations, and whether they're your taste or not.  Oh, yeah, that's a topic for another post...

If you're new to this blog, "Linda Land" is the 1-BR apartment I took last month, my haven from the natural craziness that goes along with Mike and his young children, as adorable as they are.  So when the spirit moves me I head down the road to sit in peace and quiet and look at my stuff, which had been crammed into a storage bin since last May.

After Purgefest 2010, I'm pretty much down to the essentials; only the things that truly bring me joy made the cut.   I'd much rather do things than have things, and I always say that people on their deathbeds don't look back and think, "I sure had a cool couch."  No, they'll look back and remember all the fun they had with the people they love.

So as unmaterialistic as I am, I have to admit that on my deathbed I might look back and say, "Man, I sure had a cool fridge magnet collection."  And I do--look!  The front of the fridge is covered with magnets I picked up from all my travels. There's one from Elvis' birthplace in Tupelo and another from Graceland, where he's buried; a few from biker bars; a bunch from national parks in the West and assorted cities in the East; and many more. 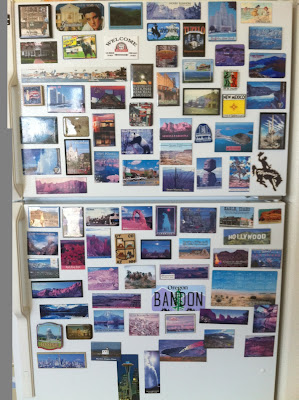 On the side of the fridge I have my special non-travel magnets.  That's a business card magnet from Julie of 47 and Starting Over fame in the top middle, a Guiding Light magnet to the right of that, and a Jackson Browne "Late for the Sky" magnet in the upper right corner.  Underneath there's Pee Wee, The Scream, a voodoo doll magnet from New Orleans, and...  what's that little bottle cap thing next to the voodoo doll? 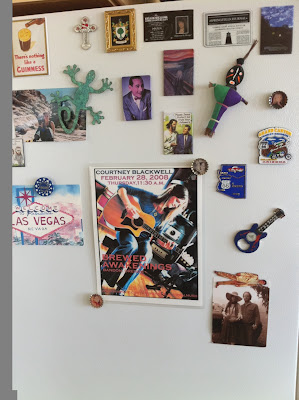 Yep, it's a bottle cap magnet with a picture of Beverly D'Angelo!  There are two other ones holding up a flyer for a show Courtney did in Oregon.  So where does one find Beverly D'Angelo fridge magnets?  One of my girlfriends in Wyoming made them for me--do I have the best friends or what?

(Poor Bev.  I wonder if she's come across my blog from a Google Alert of her name.  She's probably like, "OMG, that loon in Las Vegas is talking about me again."  And now with the fridge magnets.)

You know, I have quite a few blog readers in Bev's hometown of Columbus, Ohio.  I can't be more than six degrees of separation away.  Hook me up, will ya?

OMG, I'm so honored to make the Magnet Hall Of Fame.

And being from Columbus, I would hook you up with Bev if I could ever figure out how!

i haven't read about Bev on your blog before, but i love her too.

i've been away from blogworld, so i missed the news of your brilliant move.

i love having my own space -- i moved in early february. and i, too, only moved the things i really love.

now i want a magnet collection.

I LOVE magnets! Our fridge is covered in them. However, you've made me feel inadequate since yours are so organized! HA! Ours are all willy-nilly. I buy them from all our travels as well. I'm going to copy you and move the non-travel ones to the side (where I have a bunch of take out menus from about 100 years ago!). Time to organize!!

Hi Linda,
I was made aware of your blog and book 'Bastard Husband A Love Story' by a friend named Debbie on her blog 'From Venting to Viggo'. I've just started reading your book and enjoy both your humor and honesty. I am a man, married now for 29 years to the same woman and still the best part of my day is coming home to her. I can't relate at all to a so-called man's world that revolves around drinking, gambling, sports, etc. So my wife and I have never had those kinds of problems. But I know I will always be learning how to be a better husband.

Anyway, my question is this (please forgive my being new, if you've already answered this): has your ex read your book, and if so, how has he responded to it?

Best to you,
Ruben

Ruben, thanks for commenting. You ask a good question that I bet a lot of people wonder about. Check tomorrow's post--I'll be responding there so all can see.

Love your magnets and your home away from home! I think all of us need one!!

Hey linda! Thanks for your encouraging comment on my post about wanting people to COMMENT ON MY POST. So - you have 141 followers and I have 29. You're popular! LOL! I do get onto my site reader sometimes and look at all the people all over the world who are visiting me ... like for a second LOL. I saw that Ruben came on by. He is quite an amazing guy - an academic - very smart and interesting. ok - i have magnets on my frige too and all sorts of other crap. But your magnets are perfectly lined up and neat. Do you have OCD? kidding!

Maybe I should pass on my magnet that says: "Fridge pickers where bigger knickers".