Standing on my balcony last week I thought, "Gee, that lion out by the pool is kind of boring, all white and everything." 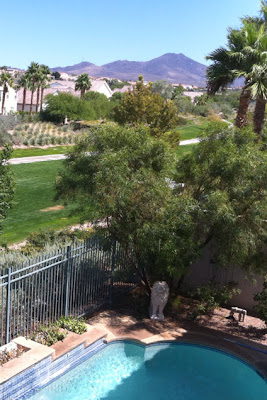 Upon closer look, I concluded the poor thing was in dire need of a makeover. 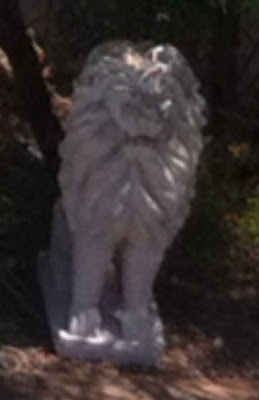 Mmmm.  Well, I happen to have a little bit of time on my hands these days, so I took a trip to Michael's craft store to buy some supplies.   I spent a whole freakin' day transforming that poor lion into what can only be described as a work of art.

Look at him now! 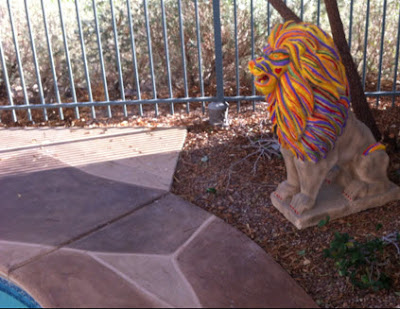 I can only imagine what the neighbors think.

The face was the hardest part.  At one point I had a red-eyed evil lion face going on, and I thought, "Jesus H, I don't want to scare the kids."  It was so funny I almost peed my pants from laughing so hard.  In the end, I came up with this face. 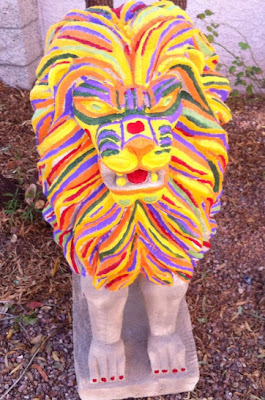 The hearts on his nose and chin and the nail polish give him a much softer look, don't you think?


If Mike doesn't already think I'm nuts, he certainly does now.  When I told him I was going to paint the thing, he replied with his standard, "Whatever you want, my love."  And then when I spent hour upon hour applying layer upon layer of color on it, he realized he was in new territory and probably wondered what the hell he's gotten himself into.

Mike had never even heard of me painting anything but a bookshelf, and the truth is, I'm not an artist.  At all.  I just bought some paints and started fooling around with no real plan in mind.  Just like in real life, when I got to a point where I didn't like where it was going, I changed course and tried something different.

There's a lot to be learned from my little surge of creativity.  I'm sure a "real" artist would go, "That's a total piece of shit," but who cares?  No one does anything perfectly right out of the gate, and there's always going to be someone who can do better than you can.  So what?  I had a ball with it, and the kids love it.  The 11-year-old told me, "I knew you're a writer, but I didn't know you could do that!" Hahahaha!

The truth is, it actually came out better than I expected.  I now sit at the kitchen table and laugh at its goofiness, which is a lot better than saying, "We gotta get rid of that goddamn thing."  It's cool now.  And now I have one more thing for my resume.

Okay, maybe not quite yet.

OMG lmfaoo and a couple snort laughs too. That is something I can see myself doing. I haven't done anything that creative in ages but, I use to spend hours painting, designing, and cutting up my clothes. Now I spend my time painting them with food, designing them with dish water, and cutting them with my spreading fat ass. That is great Linda, I don't care what anyone says that is lovely. And I could actually see that sitting outside the MGM on a much bigger scale. Truly Roarirific!!!

Thank you for inviting me to check out your latest art work! Quite fantastic! Brings this quote to mind:

"Creativity is allowing yourself to make mistakes. Art is knowing which ones to keep." ~ Scott Adams

It is amazing that you allowed yourself the creative leeway for such an unconventional art project. I love your description of trying different faces on the lion, until you got it the way you like it.

Thanks to Jen for sharing this on FB I adore it. What fun you had with such great results. Kids and I painted rocks a lot. I still have one of them. It was always a great time. No more boring old Lion, once again majestic and powerful....LOL.

I've gotta get some of your gumption, lady. I'm sorely lacking in motivation these days...and I never had creativity to begin with.

I LOVE it! So cool, unique and pretty! and I love the toenails!

Love the nails. Congrats on the new job.

Animal Rescue, indeed! At least you're thinking of it, ha ha. I love what you did to the lion - very cool!