So where was I on Thursday where I had no Internet access?  Some remote area of northern Nevada?  A desolate canyon in Utah, perhaps?

No, try the Rio Las Vegas Hotel and Casino. Mike and I had the carpets cleaned and so while they dried we decided to get out of the house and be tourists.  There are some great mid-week deals here, and we were able to get a room at the Rio for only $49.

One thing you have to watch for when you book a room in Las Vegas is the resort fees; you may be enticed by the advertised price only to find you'll be paying significantly more in the end. The Rio and their associated brands (Caesar's, Bally's, Harrah's, Paris, Planet Hollywood, Flamingo, Imperial Palace) do not charge resort fees, which is nice. 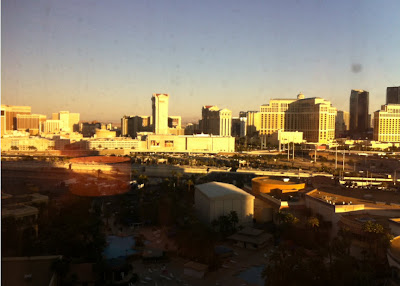 I stayed at the Rio once before back in 2003 when B.H. and I were still living in Utah.  I remember being very impressed.  This time the room seemed kind of standard to me, and I had even requested a refurbished room. 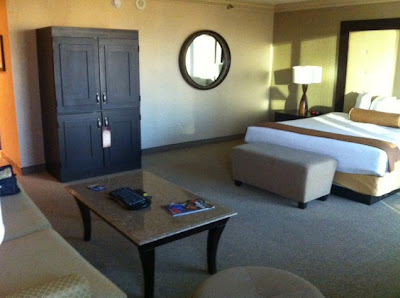 Certainly nice enough, though, and with 600 square feet, there's plenty of space.  I think part of the problem is that waking up every day at home in our own beautiful master suite, I'm pretty freakin' spoiled.

Anyway, Mike had a Halloween function at the kids' school, so I checked into the room early and we made plans to meet downstairs at the I-bar when he got there.  Being me, I had to have some fun with this--I packed a super short miniskirt that I don't even wear when I'm doing comedy, a sleazy Ross cleavage blouse, and (what else?) my 4-inch heels.  Plus--and this part is hysterical--I even curled my hair (!!!).  Now that would be a picture.

I kind of felt like a hooker sitting there waiting for Mike to arrive, but he certainly seemed to appreciate it.  Later in the poker room, a guy said to him, "It looks like you've already won"--ha!  It's all about keeping it interesting, folks.

Later we took a break and went back to the room to watch Modern Family.  What a great show; I'm convinced it will go down in television history right up there with Seinfeld. I know--who goes to Vegas to watch TV, but I'm always a little surprised to see the old boxy televisions in hotel rooms.

A couple of other things about the Rio.  We did have a fridge (which I loaded with a six-pack) and there was a coffee maker, but you had to go downstairs and buy the little packets for $8.00.  Um, no.  But I'll tell you, the customer service in that place was superb.  Every single person we encountered--the girl at check-in, the bartenders, the security personnel who not only offered directions but escorted us to our destination--everyone was pleasant and courteous and not once we were addressed as "you guys."

The next morning on our way home we stopped in at the M Resort for breakfast at Hash House a Go-Go.   They have several locations throughout the Vegas valley.  The portions are generous and the food is delicious. 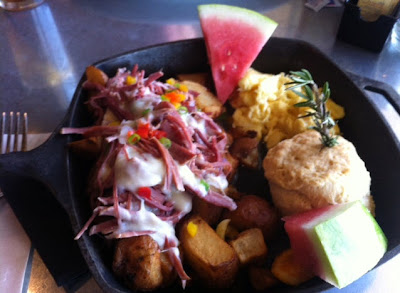 We sat overlooking the pool, which was nice. 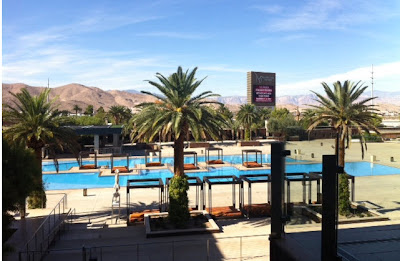 I took that shot seconds before I nearly spit my coffee all over the window when Mike unexpectedly started talking like Adam Sandler.

Anyway, it was a great little getaway and we would seriously take advantage of the low rates again.  But where next time?

Where are your favorite places to stay in Las Vegas?

I did a getaway to the Stardust once, back around 2004. They put me in one of the original 1958 motel rooms, which ran in a two-story line behind the casino, conveniently out of sight from the street. Naturally, I had no idea they even still existed.

The room had been refurbished since 1958 of course, but I still had a sense of Las Vegas history staying there, looking out over the sprawling parking lot in the rear.