I was traveling again last weekend, this time back up to Boise to see Mom and Stepdaddy.  As you can see, they're doing very well. 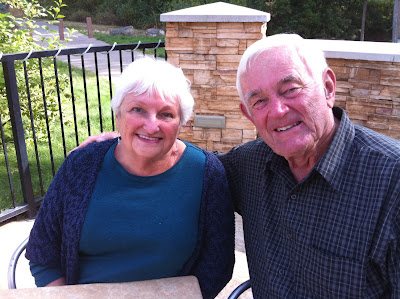 That was taken on the patio of a restaurant on the Boise River.  I've said a million times that Boise is a surprisingly cool place, and let me tell you, there are a million great places to eat there, too.  If you ever get a chance to check out Boise, do it!

We had a ball last weekend.  I'd love to say I kicked their white asses in Scrabble, but the truth is, Stepdaddy blew us away on our first game.  We also watched several DVR'ed episodes of Who Wants to Be a Millionaire? and Jeopardy and I committed the mortal sin of talking during Final Jeopardy, which brought back of flood of repressed memories from childhood.


"Jesus Christ, I'm here all goddamn day and nobody wants to talk to me and during the thirty goddamn seconds of Final Jeopardy, suddenly I'm the most popular person on earth..."

My formative years might have been MUCH different if only had DVRs had been invented in 1963.

But don't think my weekend was all about Scrabble and recorded episodes of game shows.  Sunday night the three of us took in the Australian Pink Floyd tribute show at the Morrison Center on the Boise State University campus.


Me:  "You like Pink Floyd, right?
Mom:  "Well, I like The Wall."
Me:  "Do you want to see Australian Pink Floyd Sunday night?"
Mom:  "Sure.  We don't have to smoke marijuana beforehand, do we?"
Me: "No, but do you have any Oxycontin left over from your gall bladder operation last year?"

The show was excellent. "Much better than those two old guys we saw a couple of weeks ago," Mom said, referring to Merle Haggard and Kris Kristofferson.  I'd say Mom and Stepdaddy were the oldest ones there Sunday night, but one of Mom's friends, who's in her 80s, was volunteering as an usher.

"You remember the Pink Floyd, don't you Diane?" she said as we entered the auditorium.

Let me tell you something.  I had a hard time believing my mother's friend was in her 80s; I would have guessed early 70s.  Do you know what gave me the impression she was much younger?  Her posture!  She stood so tall and carried herself like a person half her age.  My first yoga teacher, Nancy Kish in Shelton, CT, always said, "You're as young as your spine," and holy crap it is so true!

I've said a million times that the way you carry yourself is SO important.  But man, despite my yoga teacher's words,  I never associated good posture with youthfulness.  So let me tell you one more time to stand up straight and smile.  There--you just knocked a few years off your age.

LOL Scrabble and recorded TV shows....sounds like a fun time to me! I get overly competitive at scrabble.

Oh and I just straightened up! :)

it's true re posture, and you also knock about 7lbs off your weight!

My daughter umm... sounds like how I get introduced. lol Funny you said Pink Floyd, husby just asked me if I want to go see them at the Fox theater this weekend. Maybe I should have said yes. I have never been to a concert and after all this lump shizzle, I may just regret not doing something as exciting as this. I mean I need excitement but, right now I can only stand so much before I may vomit. How was the concert? xoxo

Linda, your mom looks great! Please tell her hi from her former tenant, Ummm. I thoroughly enjoyed the year I spent with her on Lincoln Ave and am glad to hear she's doing well (and you, too)!