A generation encased in bubble wrap

Aside from the thought of Mike Tyson's 100 pigeons, nothing makes me projectile vomit faster than what has come to be know as "helicopter parents."  In case this term is new to you, these are people who hover over their kids--even through college and into adulthood--making sure that every aspect of their lives goes smoothly.

Well, it seems they've had to cancel the annual Easter egg hunt in Colorado Springs this year.  According to this article, organizers cite "the behavior of aggressive parents who swarmed into the tiny park last year, determined that their kids get an egg."  Evidently last year the hunt was over in seconds because parents jumped a rope set up to allow only children into the park.

Excuse me while I wipe the vomit off the wall.

I've written about this before, but as you can tell, I'm not done with the rant.  My blogging buddy, Debbie, over at From Venting to Viggo also wrote on this topic earlier this week.  You and I both know she's a complete whack job, but she makes a lot of good points.

What the hell is wrong with these people?  Do they think they're doing these kids any favors?  Parents are writing their kids' college essays, badgering professors about grades, and mommies and daddies are even in on job negotiations these days.  We're cultivating a generation of little pussies.  Pussy Nation.

Ron Alsop is a former Wall Street Journal reporter and author of The Trophy Kids Grow Up, which examines the "millennial children" generation.  He says, "That's the perfect metaphor for millennial children. They (parents) can't stay out of their children's lives. They don't give their children enough chances to learn from hard knocks, mistakes."

My parents didn't even know where we were half the time.  More than half.


"The first wave of the Millennial Generation—born between 1980 and 2001—is entering the work force, and employers are facing some of the biggest management challenges they’ve ever encountered. They are trying to integrate the most demanding and most coddled generation in history into a workplace shaped by the driven baby-boom generation. Like them or not, the millennials are America future work force. They are actually a larger group than the boomers—92 million vs. 78 million." 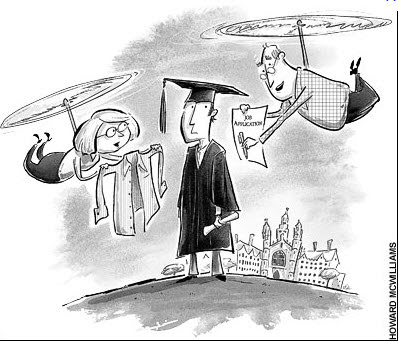 One of the Amazon reviewers makes a good point in that (no surprise) this phenomenon pertains to the angels of the upper and middle classes. He asks,


"What about the rest of us Millenials, though? The ones who come from lower-Middle Class and Working-Class backgrounds? We represent a majority of the Millenial population, but Alsop has precious little to say about us except in a handful of polls aimed at our general age demographic. These are the kids who have to work in the increasingly large number of low-paying service jobs, who go to junior and state colleges. The kids who don't spend 'at least a summer' studying abroad because that's several thousand dollars that we can't afford to part with. The kids who end up with increasingly large amounts of student loan debt because our parents can't afford to coddle us."

That's the kid I want to work with.  And there are plenty of them out there.

So I've decided that the next time I need a financial adviser, dentist, physician or other professional, my determination to enlist their services will depend on their answer to this question:  "How old were you when your parents stopped paying your car insurance and cell phone bill?"

I guess my kids would be perfect for you for whatever you needed. I never paid their car insurance or cell phone bills. They were not allowed to have either until they had a job and could afford it on their own. Does not make me a mean mom!!

Shit. I needed to read this. I am not the parent who tried to protect my son from the natural consequences of life (NOT finding an easter egg), but I do pay his frigging car insurance because he does not have a frigging job. I'd like to think his circumstances are "special" (yes, that's funny) and that I am being supportive of him during his crisis time. But really? REALLY? You know what his "special issues" are.

Oh, and on that topic, I won't be visiting this month because he's back in jail.

I don't get the "everyone wins" attitude either. One team or one player wins and the other(s) lose. Get over it. What happens when these kids go for a job interview and someone else gets hired? They won't know how to react. It makes me puke!

I had heard the Easter egg hunt story and, like you, unloaded my lunch but quick.

One of my sisters is the dreaded helicopter parent: children aged 30, 24 and 21. Hovers over them all, throws money their way. Complains she can't afford to retire. I keep my big mouth shut. So does her husband. Whaddya gonna do? She's creating her own hell, and hell for her kids. I think it's guilt for leaving them so much when she was a young working mom.

I agree with every word of this post!
In fact, had this converstation with my sister just yesterday, how parents keep trying to "protect" their children from disappointment.
When we were young, a birthday party game "pass the parcel" had 1 (ONE) gift in the middle , and the eventual winner got it. Nowadays, so that everyone's a winner, gifts have to bewrapped between all the layers. That, to me, explains it in a nutshell. And they are nut jobs who are doing this, all-be-it well-intentioned!
As parents, we have one job- teach our children to be independent of us. Tha's it.

My Older daughter is graduating college next month. She has a lot of loans to pay off. That is because I was a single mom taking care of three kids when she started college. Now my younger daughter is in college this is her first year. She is going to be in the same situation as my older daughter. I understand what you are talking about. My son he is my oldest dropped out of school. I was upset about that but then there was nothing I could do about it. Now he is struggling to get his GED. I am proud of him that he is trying to get that and improve his life. He has a seven month old daughter now.

LOVED THIS POST! You're so right. We do have a generation of little pussies who have no freaking backbone or ability to SACRIFICE. My dad has a great saying ... "life will humble your ass." When helicopter parents die off and leave their 40 or 50 year old children unable to deal with the challenges of life ... I hope I'm around long enough to witness that. It would be interesting to see how that generation ends up.

And thanks for the plug!

I have a friend who refers to this phenomenon as "The Pussification of America". Couldn't agree more.

When I played Little League, you sat on the bench if you sucked. And you sat there the ENTIRE time, year after year even. The thought process was,

"Perhaps little Johnny needs to find something else he's good at, because it's certainly not baseball."

What happened to that mentality?