I have a real girly-girl post on tap for today, but boys, don't think I'm gonna leave you high and dry.  I recently came across a blog I think you'll be interested in, my new virtual friend Grrouchie's Confessions of a Local Fish.   "Poker, Craps, Football and Strippers and Hookers, welcome to a real man's blog!" proclaims his header.  He's a young guy (I'm pretty sure) (about the young part; he's certainly a guy) who lives here in Vegas and someday wants to start doing stand-up, so his stuff is witty and gritty.  And it looks like he's committed to blogging; he posts often.  AND, he responds to all his comments--something I need to do.  Bad Linda.

Now go over and visit with Grrouchie while I talk with the girls.

This is a nostalgic post for those of us over... I want to say 50.  Great, now all the younger gals are leaving for Grrouchie's.

Anyway, Sunday night I took my little stepdaughter to see "Cinderella" at the Henderson Pavilion, put on by the Las Vegas Shakespeare Company.  It was the Rodgers and Hammerstein version--do you remember seeing that on TV when you were a kid?  With Lesley Ann Warren?  Didn't you love it?

I'm not a big fan of musicals, but who could resist "In My Own Little Corner," "Impossible!" and "Ten Minutes Ago"?  If you're a fan, you will so dig this video.

Isn't she beautiful?  She looks just like my Aunt Peggy!

(In case you haven't figured this out, I have Cinderella tendencies.)

Anyway, if you're in town and want to catch the show, it's playing next Friday through Sunday.  It's a nice production.  Tickets are only $10, which you can buy over the phone, and... I hope you're sitting down... There's no service charge.  Can you believe it?  I was like, "Get the hell out of here!"

One thing about the Henderson Pavilion--we had eighth row seats, but the floor seats are not on an incline, so it's hard for little kids to see the stage.  At intermission, we sat back a bit and it was much better.  Just an FYI.

The best line of the night came out of Mike's little one:  "I'm glad YOU'RE not a mean stepmother!"

(But if anyone thinks I'm starting to get soft, don't you worry.  In another couple of weeks I'll be partying with the bikers down in Laughlin at the River Run.  HELL, yeah!)

Finally, today is baby Hazel's birthday.  Our family has been blessed with this little red-headed angel for 2 years now. 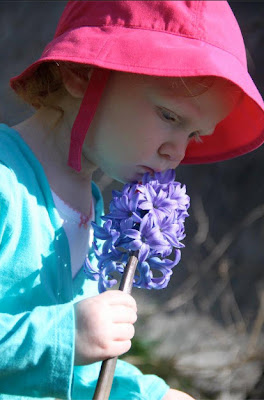 As always, thanks for reading.  Have a great day!

Wonderful blog. I'm glad for Josie mentioning it! Thanks for supporting my friend-ish Grrouchie.

I LOVED that version of Cinderella and was madly in love with Prince Charming. Great memories.

What a way to start my morning - wake up and find out that someone has pimped me out while I was sleeping and tried to hook me up with the young and pretty girls of the internet!!
Good Effort. Also, good advice on the show.