Ha!  I posted that cheesy pic of myself in my new jeans on Facebook and got 22 comments, all favorable except one: 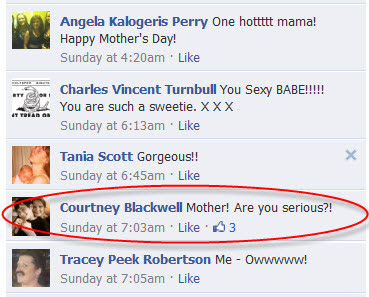 I love those freakin' jeans, "age appropriate" or not.

I've come to the conclusion that I'm actually a 21-year-old trapped in a 30-year-old body.  HAHAHAHA!!! OMG, I just reached a new level of assholiness!  And you're here to witness it.

Anyway, I'm totally digging that show Girls on HBO.  Are you watching it?  Twenty-four-year-old Lena Dunham is the writer and executive producer, and man, that chick is talented.  The website calls it "a comic look at the humiliations and rare triumphs of a group of girls in their early 20s," and if you don't think that would interest you, let me tell you I can't believe the sex scenes in this show.  I'm gonna sound like a prude, despite the fact that I'm the owner of those spankin' hot jeans, but I think those scenes are a bit over the top.  Like seriously close to pornographic, which I never cared for.  Because I'm a prude.  Ironically.

At any rate, it's written with full-frontal honesty--pun intended--and the acting is superb.  Lena Dunham plays the main character, Hannah, and she's a real person, not a size 0 Hollywood definition of how a 20-something should look.  In the first show, her parents tell her they'll no longer support her, and you know how I feel about parents paying cell phone bills and car insurance for their 25-year-old supposed-to-be-adult children.

I really do like young people, though (once they get past the Disneyland age), and nothing thrills me more than hearing from a girl in her 20s or in college who's read my book.  I also get a kick when teenagers friend me on Facebook.  In fact, this comment came from a high school senior: 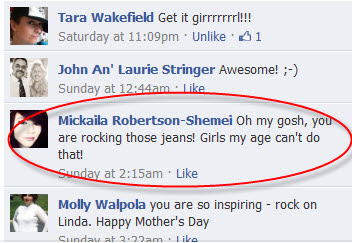 Assholiness - love that word, will have to use it soon.

You do rock the jeans and I had to ask myself: would I wear them at my age if I rocked them? Yes - but never in front of my son who would seriously disown me out of embarrassing.

I saw the first episode of Girls and even though I am NOT a prude by any means, I didn't like the sex scene of her and that dude on the couch. I have it on DVR but haven't got around to watching it.

I'm glad I'm not the only one who didn't appreciate the sex scene in that first episode. Wait till you see some of the later ones!

"Would I ever want to be 24 again? No fucking way! I get better every year. Don't you? "
Linda, I would not want to be 24 again, no way! I just wish I had the confidence then that I have now (and I'm not what you'd call super-confident now, you should've seen me then!!).
I think it's brilliant and hilarious that you have teenage FB friends!

As you get older you should have more and more fun.
Screw this whole "age appropriate" or inappropriate stuff - Do what you want, when you want and how you want.

If someone else doesn't like it - that is their problem.

Rock the Jeans and Wear them out more!
To choices this Friday if you're going!

Right on, Grrouchie! I won't be going to Choices this Friday--heading up to Boise for a belated Mother's Day celebration. It's a good place to hang and get the feel of what's going on in the local comedy world, though. "Walk in the mist and you get wet." Soon you'll be ready to take the stage yourself!

Mimi, you're the tits!