You're never too old for your first wet T-shirt contest (to watch, I mean) (duh)

So let me tell you more about the River Run bike fest down in Laughlin last week.

Well, it took me 54 years to witness my first wet T-shirt contest and my friend Donna and I agreed it was nowhere near as skanky as I imagined those things to be.  It was held in a parking lot of one of the casinos, so being in an open space like that, they had to have some controls.  Like the contestants had to wear pasties, so you couldn't really see anything through their shirts, anyway, as they pranced about on stage.

One of the contestants was gorgeous and the rest ranged from attractive to, um, not so much.  Despite the fact that Ms. Gorgeous had a bubbly personality and even did a split on stage, she only came in second.  The winner was a good looking woman whom the announcer made sure we all knew was 42 years old.  Forty-two years old!!!  He made it sound like she was ancient.  The winner was determined by the round of applause, and the crowd clearly dug the fact that she was age of GILF not MILF, so she strutted off with first place and a couple of hundred dollars.

I thought that was cool.  Now, there was another woman in the contest who was 53, but...  not to sound like an a-hole...  but she wasn't a "Linda Lou 53," if you know what I mean, and the crowd didn't give her quite as warm a reception.  And there were some women on that stage whose time really, really would have been better spent somewhere else (like in a library or gym, or even at the dentist).  All in all, though, there was an vibe of  good fun, and like I said, the overall skank factor was low.

Afterward we headed over to the lot where my hot friend Adrian was selling beer. 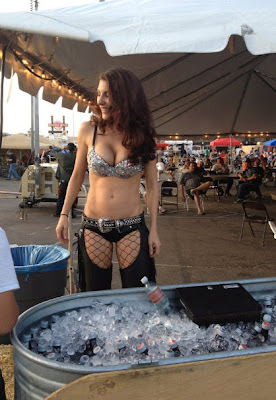 Donna and I watched her with sheer jealousy admiration as she teased and joked with her patrons.  Everybody wanted to have their pictures taken with her (I didn't, of course--see last post!)  How interesting it was to see both men and women react to this magnificent physical form, who BTW, also has a killer personality.   What must that be like? Donna and I wondered.  I mean, I've experienced a tiny bit of that type of admiring attention at book signings and after comedy gigs, but it certainly wasn't because of my looks.

So is it wrong to earn money from wet T-shirt and other contests, or get crazy tips simply because of the way you look?  Is that degrading to women?

Hey, if you've got it, flaunt it.  Make the most of it.  Earn money from it. Enter every contest you can.  It's almost cliche, but there really are "dancers" who use their earnings to pay for tuition or otherwise better their lives.  Nothing wrong with it, in my opinion.  (Let me make it clear that I'm talking about emotionally healthy, non-abused adult women who participant by their own free will.)

So why the asterisk *?  Okay, this is where I get picky-picky.  I think it's okay to use your looks as a means to an end, but you have to have something else going on.  Real beauty comes from the inside out, and that's the type that never fades.  If all you have is good looks, the day will come where you'll be crying in the beer you didn't sell.   Adrian did some of the contests down in Laughlin this year, but according to her Facebook page, that's the end of it.  Next stop:  nursing school.

my thoughts on this are very complicated. I cringe at the hyper-sexualization of women in our culture. At the same time I wonder, what is a healthy way to celebrate physical beauty? Being a femme lesbian, I can understand wanting to flaunt it for lesbians (especially butch ones!) but the thought of doing it for heterosexual men creeps me out. I know, I said it was complicated.

Oh Gosh Linda I am such a prude. (1) even if I looked like Adrian I could never, ever do anything like strut around in that outfit because I'd never, ever want to embarrass my father. Remember, raised Catholic and Mexican ... stuff like that was a no-no. And, I am such a damn feminist it disappointments me when young women resort to the obvious. I don't mean to sound like a hater. But then, I never looked like Adrian so maybe I'd feel differently if I had! lol!

Linda unfortunately our society puts high value on looks. Took me a long time to reconcile with this. Now I realize how quickly looks will fade so I'm going to use what I have until its gone. Having something underneath is key to making the whole thing work.

I think you're asterisk is right on. Consider however why we never have these commentaries about guys doing the same thing. I remember seeing a German tourist guy - my size and appearance - at a beach in Eilat wearing a pair of really tight, small Speedos as he went to take a dip in the Gulf waters. I wondered then whether I could nonchalantly do the same and would anybody care.

Yeah, I'm definitely against the pasties in the wet t-shirt contest... ;)

Sid is right on the money.

You know what t.v. ad I loathe? The Miss Turkey ad when the model struts out by the pool in her bikini eating the dripping burger and the do a close up of the tiny burgers on the cup of her bikini? Yeah, I know sexy sells...I'm just waiting for the Mr. Turkey ads to square it all up. You think Carl's Jr. would show a buff man in a speedo and zoom in on his crotch to show us the tiny turkeys? Not on yer life.

Real beauty does come from within.

An odd fact about me, I have NEVER dated anyone whom I was immediately attracted to.

I have gotten to know them, their personalities and eventually as I grew to love them they became more attractive to me.

@ Tara: Yeah, you're not kidding, that's complicated! And, I think Sid makes a good point, too. I'm going to address this in a future post.

@ Sid: I can't think of ANYONE I'd want to see in a really small Speedo!

@ Carmel: Smart girl. When you have something underneath, you'll always be beautiful.

@ Grrouchie as your ex fiancee I resent that since I'm pretty!!

I want to it all :) To sexy and substantive!

This is why I always carry a spray bottle filled with cold water. ya never know!

You're as prepared as a Boy Scout, Ray!

I'm with Coach, pasties in a wet t-shirt contest is a crime. I could see it maybe in the midwest (sorry if I just insulted the midwest) but in Vegas? OK, it's Laughlin, but close enough. That's just absurd.

As I have gotten a little older, it is amazing the appreciation I have gotten for "older" women. The key in many circumstances: How does the woman carry herself? A woman who is confident and oozes friendliness, intelligence and kindness adds tons to her attractiveness and sex appeal.

Maybe it's cruel, but I laughed so hard at this bit.."better spent somewhere else (like in a library or gym, or even at the dentist)".
I think the distinction is, as you say, if they're doing it of their own free will and it's not abusive, then I think go for it. But, being honest, I still wouldn't like my daughters to do that for a living... so not sure where that leaves me!