This year's adventures at the Laughlin River Run

Usually I go to the annual Laughlin River Run bike fest on the Saturday of the event, but this year my pal Donna had tickets to see Bon Jovi Saturday night, so we both took last Friday off from work and headed down the highway.

I've attended the River Run every year since 2008, when I wrote this piece, back when I was a columnist for www.living-las-vegas.com.  Longtime readers know that I'm not really a biker chick--I'm too Private Benjamin/Princess and the Pea for motorcycles--but I do love the biker culture.   The music is always great and anything goes--no one cares what you're wearing or if you're overweight or your roots are in dire need of a touch-up. Everyone's just out for a good time. That's liberating.

That said, as a general rule of thumb, whatever you wear should probably cover your ass crack. 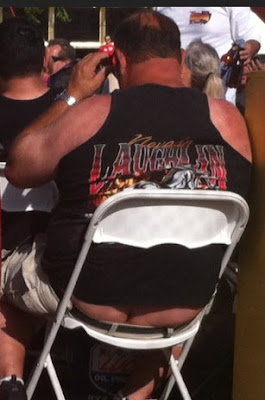 Oh, my.  Like, wouldn't you think he'd feel a little breeze down there?  This is terrible, but that kind of looks like my father.  Like if my father was a biker dude instead of a bus driver.

Anyway, here I am sporting a Harley tank top my sister Lori Biker gave me. 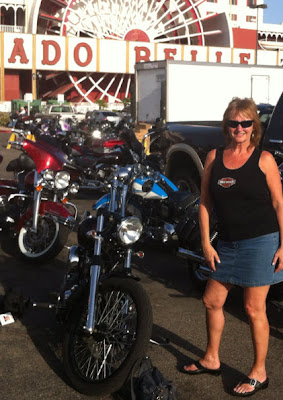 I'm such a poser, huh?  Noooo, I can't get on a motorcycle!  The helmet will mess up my hair!

So it's kind of obvious that I didn't just get off a bike. But Donna and I were noticing that this year there were a LOT of people there who didn't look like bikers.  I mean, we saw people pushing baby strollers and guys in freakin' golf shirts!  Interesting.

My friend Adrian was working there again this year, selling beer in the parking lot of one of the casinos on the Laughlin Strip.  Adrian is not only freakin' hot, she's the nicest, sweetest, funniest person.  I mean hilarious.  She asked me about doing stand-up and I'm going to encourage that big time.  She's a natural. 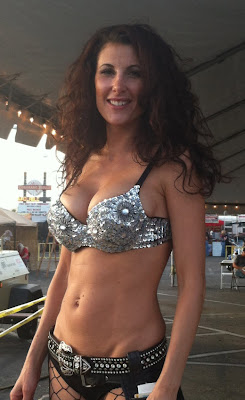 (I know I have a bunch of new male readers who will thank me for that one!)

Adrian insisted we get a few pictures together and I was like, "Get the fuck out of here.  I'm pretty good looking until I stand next to you!"  But I can't resist her, so she won. 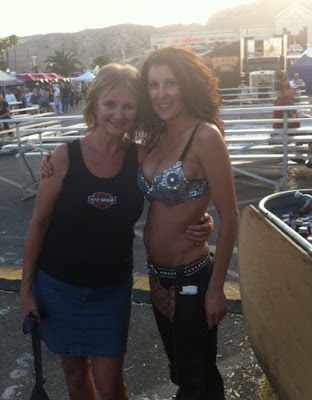 I just want you to know that smile on my face is totally fake. My self-esteem isn't strong enough to stand next to a size 0 without crying on the inside.  I have more to tell you about our day in Laughlin, but right now I need to do my Buns of Steel video.  A hundred times.

To be continued on Thursday...

will she be as pretty as you later on?
xo

@ Coach: "The Princess and the Pea" is a fairy tale by Hans Christian Andersen. Read on:

There was once a prince, and he wanted a princess, but then she must be a real Princess. He travelled right around the world to find one, but there was always something wrong. There were plenty of princesses, but whether they were real princesses he had great difficulty in discovering; there was always something which was not quite right about them. So at last he had come home again, and he was very sad because he wanted a real princess so badly.

One evening there was a terrible storm; it thundered and lightninged and the rain poured down in torrents; indeed it was a fearful night.

In the middle of the storm somebody knocked at the town gate, and the old King himself sent to open it.

It was a princess who stood outside, but she was in a terrible state from the rain and the storm. The water streamed out of her hair and her clothes; it ran in at the top of her shoes and out at the heel, but she said that she was a real princess.

‘Well we shall soon see if that is true,’ thought the old Queen, but she said nothing. She went into the bedroom, took all the bed clothes off and laid a pea on the bedstead: then she took twenty mattresses and piled them on top of the pea, and then twenty feather beds on top of the mattresses. This was where the princess was to sleep that night. In the morning they asked her how she slept.

‘Oh terribly bad!’ said the princess. ‘I have hardly closed my eyes the whole night! Heaven knows what was in the bed. I seemed to be lying upon some hard thing, and my whole body is black and blue this morning. It is terrible!’

They saw at once that she must be a real princess when she had felt the pea through twenty mattresses and twenty feather beds. Nobody but a real princess could have such a delicate skin.

So the prince took her to be his wife, for now he was sure that he had found a real princess, and the pea was put into the Museum, where it may still be seen if no one has stolen it.

@ Ray: Yep, Adrian will still be gorgeous when she's my age in another 24 years. Beauty comes from the inside out, and that's where her real beauty lies.

Thanks for the beer link!

Glad you're out there having fun, its about time you did ;)

Yep, your friend is HOT, but you know you are too! And I agree, beauty is from the inside out. Nice to know Adrian's insides match her outsides.

They really do, Barbara! She is precious. And you're right, it's abut time I let loose--ha!

I just want you to know that smile on my face is totally fake. My self-esteem isn't strong enough to stand next to a size 0 without crying on the inside.

I AM SO LAUGHING MY ASS OFF RIGHT NOW!!

p.s. If that were me I'd be visibly crying.

Yeah, the 'pea princess' beats Private Benjamin at being girly... ;)

@ grrouchie: I'm all about having a good time!

@ Rob: Thanks for commenting! Adrian did sell a lot of beer... and made a lot of tips!

@ Coach: Definitely. And I have princess tendencies.