What I've been up to since last time

Feel like I've been busy as hell lately.  I'll start with today and work backward.

Did a glorious 5-mile walk this morning out at Lake Mead with my friend Gail...

...and then went into Boulder City for lunch at the Boulder Dam Brewing Company. Oh, what a gorgeous day! And there' nothing like sipping a Black Canyon Stout on an outdoor patio in the sun. Especially on January 21.  How lucky we are!

Last night I did a set at the open mic at Boomers.  If you read my book, you know why Boomers holds a special place in my heart. There are a whole new set of comics hanging out there from when I started nine years ago (tells you how far I've come in my comedy career), and I love them all.  You know me and the black audiences--they're my favorite.  I really don't do open mics much anymore, but Boomers has been a blast in the past few months and last night I had a ball.  I'll probably head there next Sunday as well and try out some new material.

Saturday night Mike and I saw the Motown tribute band Spectrum at the Smith Center in downtown Las Vegas.  OMG, what fun!  My friend's husband is the second guy from the right.

The show was fantastic and the Smith Center is truly a world class performing arts center.  Absolutely beautiful.  Mike and I had never been there before--I can't believe it took us this long.  If you live in Vegas, or are just visiting, get on their website, pick a show to attend and just GO.  You won't be disappointed. 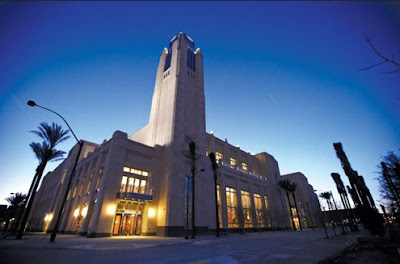 The show started at 7:00 and we were out of there by 9:00 with no plans for the rest of the night.  I suggested we have a drink at Dino's Lounge, my favorite karaoke dive bar, or at the bar on the top of the Stratosphere, but beloved husband doesn't enjoy the suds as much as I do (he's no B.H., that's for sure, but is there no happy medium?), so we ended up going to the movies to see Argo.

My assessment:  Meh. It wasn't as good as I hoped it would be; a typical overly dramatic Hollywood product with an over-the-top score.  Just my opinion. But after seeing it, I love the Canadians more than ever. And you know I freakin' LOVE Canadians.

That brings us to Friday night. I participated in the last of the first round of the Put Up or Shut Up comedy contest in downtown Las Vegas (I know--downtown two nights in a row!) and made it to the second round.  It's not a huge contest, but hey... it's exposure. I'll let you know when I find out the details about Round 2.

And then last Thursday night, Mike and I went to see my comedy coach, Michael "Wheels" Parise perform at the Comedy Stop in the Tropicana. Mike had never seen him perform, and I said, "Wouldn't it be funny if here he is, my comedy coach, and he totally sucked?"  But no, he was a riot. I sat there thinking, okay, this is how the pro does it.  I could see in his act where he utilized some of the techniques he shared with me, stuff that no one else would pick up on. Funny as hell.  "Wheels"just started a podcast; you can check it out here.

So, yeah, it's been a busy few days.  Tonight I'm heading over to the Artisan to see if I can get some stage time there soon, and tomorrow night I'll be doing a very short set for TickleMe Entertainment at Las Vegas Grille at Sahara and Buffalo at 7:30.

So that's how I'm staying out of trouble.  What have YOU been up to?

I have not been up to nearly as much as you have.

My entire life has been revolving around work due to a lack of coverage because of surgeries and positional changes and whatnot.

Oh, the exhaustion gets to me.

Need to get out and watch some comedy performances... depending on when I work next Monday maybe i'll be able to catch your Sunday set..
only time will tell

ah, Boomers. It's so great you are getting out on stage so frequently. Someday I may turn on the t.v. and find you on Letterman or that other guy. Do they still have stand-up?

I just saw Zero Dark Thirty. Pretty much what I expected (lots of horror) but it was well done.

What's keeping me busy? Oh, just filed (finally) for divorce. That's what is keeping me busy. I'm trying to let the attorneys handle it and just stay out of their way. Same-sex divorce: it's just as divisive as hetero divorce can be. Oh Joy.

Thanks for dropping by and following me!!
Have driven by Dino's while wintering here, will have to stop in for sure!!
and I must say Captain Bastard's Oatmeal Stout would definitely be liked by my husband!

Your list makes me tired just reading it. All I'm doing is working and knitting, oh and driving on icy roads.
Cassie, Edmonton, Alberta.

UPDATE - we went to the Boulder City Brewing Company and really enjoyed our beers!