Last week at the invitation of one of my clients, I attended a leadership breakfast at The Four Seasons Hotel next to Mandalay Bay on the Strip. As my Nana would say, it's a very ritzy place.  Former Secretary of Homeland Security Tom Ridge was the featured speaker, and he gave me a lot to think about regarding the importance of U.S. diplomacy and how we're helping ourselves by helping others.

But as intellectual as this all sounds, you and I both know you can totally picture me pulling up to the valet in my dusty Scion with the Harley Davidson sticker on the back window.  And on the passenger's side of the front windshield? A stubborn glob of bird shit that I kept meaning to do something about, but every time I got into my car I never happened to have a bottle of Windex and a wad of paper towels.

I imagine the spanking clean valet guy in his pressed uniform threw up in his mouth a little when he noticed the old Altoid tins and disposable flip-flops from my last pedicure stuffed into the little compartment on the driver's door that's my idea of a litter bag.  Now I have something to tell my grandchildren, he probably thought, recalling his childhood when he'd sit on his Grandpa's lap and listen to his horror stories of working as a valet guy in the olden days when he'd occasionally have to park a Pinto or a Gremlin or a Pacer or a Corvair.

Anyway, breakfast was some kind of fancy egg concoction with a few slices of bacon on the side.  Bacon.  Just how do you eat bacon at the Four Seasons? Do you cut it up with your knife and fork?  Or do you nonchalantly break it into little pieces with your fingers and then pop a bit into your mouth when no one's looking?  I hope that's the right answer because that's what I did. I tried to look around to see how other people were handling the situation, but nobody seemed to be eating their bacon at all.  Probably because they, too, were waiting for the moment when no one was looking.

Oh, if only bacon were my biggest problem in life...

Anyway, on Saturday I took my friend Warren, the guy I met on a Southwest flight from Albany a couple of years ago, up to Red Rock Canyon.  If you come to Las Vegas and don't check out Red Rock, you're really depriving yourself.  Warren has visited Las Vegas many, many times but had never been off the Strip.  Needless to say, he was impressed by the beautiful scenery. 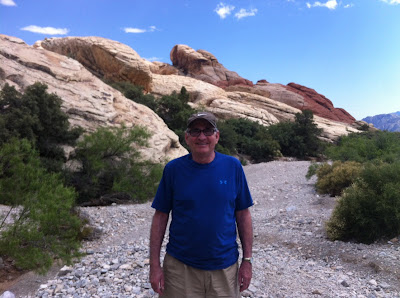 That morning I got an oil change and at the end the guy said, "And we washed the outside of all your windows" and I was like, "Woo-hoo!" because of course I still hadn't dealt with the stubborn glob  on my windshield and I really didn't want Warren to have to view the gorgeous rocks through bird shit.

Well, the "Woo-hoo!" was totally premature  because the bird shit was still there.  I told you it was stubborn.  I went home to shower, the whole time thinking, I have to remember to clean off that bird shit before I pick up Warren at his hotel.  But once I got to the Tuscany and saw Warren walking toward my car, sure enough,THAT'S when I remembered. So I got out of the car right then and there, took a Kleenex, and rubbed the windshield like a magic genie until it came clean.

And now in that little compartment on the driver's door of my car, there are old Altoid tins and disposable flip-flops from my last pedicure and a Kleenex with remnants of bird shit.  How's that for a happy ending?

Aaaah. That's so sweet. I got all choked up at the end.
KP

a clean windshield? show off!
xo

You are just a ray of sunshine on a cloudy day ...

Oh Linda Lou I love this. Just wait - as you edit my book you will come across a scene in a restaurant when we are in Oregon. It involves a ritzy place and bacon. Glad you didn't do what I did... you'll see.

As long as the bird shit and bacon didn't end up on the same plate, you're all good. I was a bit afraid at first.
I had some totally GROSS birdshit on both my windshield and the passenger window yesterday. I made my hubby clean it off. That bird had diarrhea. It sure did.

Did you at least spit on the Kleenex before you began your clean up? If mom's expectorant can cure cuts & bruises, it can surely remove bird shit effortlessly and leave your window antiseptically clean.

I walked into the Four Seasons a few years back on a Vegas trip and it was so quiet I thought everyone had stopped what they were doing to see what this low life was doing in a fancy place like this. Used the public bathroom in there and they had REAL TOWELS!!! So I understand why you were unsure how to eat the bacon - I was unsure if I should dirty up their nice towels.

Every guest used a clean one - there was a big hamper beside the sink. Can you imagine the volume of laundry? Maybe it was an executive bathroom and I didn't notice.

Hope you remember which one is the fowl klennex before you blow your nose next time!

Growing up in southern Ohio, our family car was always parked under a big elm tree. The birds pooped on it so much that the kids at school called it the Poopmobile. It's even mentioned in the yearbook.