Oh, man, it was good to get away this weekend.  As you can see, Mom and Stepdaddy are doing well. 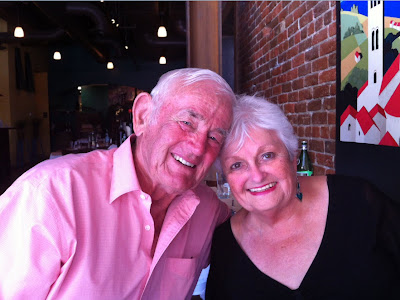 Don't they look fantastic?  You'd never know her blouse is on backward, right?  It is!  When she showed me the tag in the front, I thought, oh Jesus, she's losing it.  But Mom said the girl in the Black & White store said a lot of people wear it backwards so I guess she's okay after all.

Boise is just a wonderful place--every time I go there I love it more and more. It's a city in the middle of the country. Within minutes you can go from seeing cattle grazing to walking around a funky downtown with cool shops and restaurants.  I know, I tell you this over and over but it's true.  It's a really nice place to live.

After I got in Friday night we headed straight to Bardenay Restaurant and Distillery in Eagle, just outside of Boise, and had dinner on the outside patio on the Boise River.  The weather was beautiful and in the summer it doesn't get dark up there until after nine o'clock; next month around the summer solstice it will still be bright at ten.

On Saturday Mom and I toured some houses on the Parade of Homes, went shopping at Ross (of course), and then we met the lady who runs the Boise office of our company for a drink at another cool little place with a patio.  I'd talked to her on the phone several times, but had never met her.  She was awesome.

And then on Sunday we lounged around the house until it was time to go out for dinner. 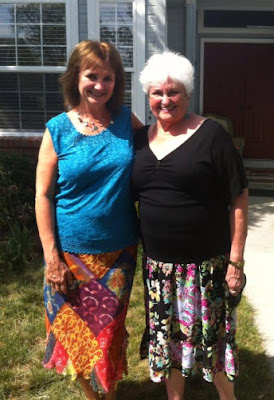 Super.  Here's another picture that will come up when someone Googles "middle age spread."  I've been doing pretty well weight-wise, keeping under 140, but if someone told me 10 years ago that I'd be happy to weigh 139.6, I'd be like get the hell out--that's what I weighed both times the day I gave birth.  Whatev, right?  Hey, look--I wore the same skirt to my brother's wedding in 2008. 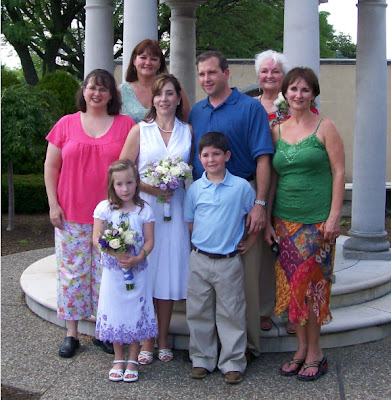 And I thought I looked fat then and I was probably four pounds lighter.  Maybe five.

Anyway, usually when I go to Boise we try to take in a movie at The Flicks (independent movie house that sells mircobrews), but we didn't get a chance this time.  Mom said she hasn't seen anything good lately, but she watched No Strings Attached on Netflix twice because evidently Ashton Kutcher has a wonderful ass.  I swear to God.

I got her a Mother's Day card that said something like the nut doesn't fall far from the tree and it scares the crap out of me that it might be true.  But take a look at that first photo again--I sure wouldn't mind looking like that when I'm 78!

One last photo I must share.  Because you know how exciting it is to look at other people's grandchildren. 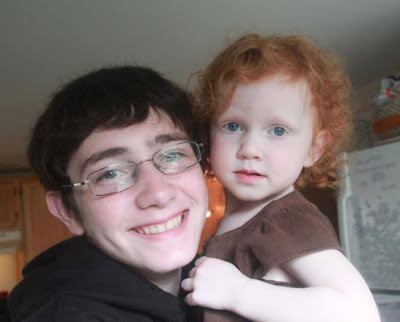 I miss them so much.  I have a flight booked for early next month--can't wait!

Ha! 4 or 5 lbs. lighter? Oh, I can TELL the diff. At our age, the soft doughy middle is inevitable. Stroke it. Love it. Whisper sweet nothings to it.

Your mom does look great - it gives me hope that at 78 I can still be a cutie!

Speaking of cuties -- those grand kids. Whoa. I know, I know, being a grandmother is da bomb.

You look wonderful Linda! We have to stop comparing our 50-ish weight to that of our 20's. Or if you must, at least give yourself 5 - 10 lbs of boob-age credit!! (Man, if I could only have those b-cups back :o)

You (and your mom) look great but I hear you on the weight. It's amazing to me that I can weight the same as I did 10 years ago and wore a size 6 and I'm now in a size 10... things have all moved south. Sheesh.

Sounds like a perfect visit and those grandkids-- I yiyi,they're gorgeous!