Well, it's about damn time.  Mike and I had a really nice weekend together--our first weekend alone since early April and believe me, it would be an understatement to say that having no alone time has taken a toll on my sanity. We needed this.

Yesterday we did the Cathedral Rock hike up at Mount Charleston.  I cannot freakin' believe that I've lived in Las Vegas for 10 years and have never walked around up there.  Look how beautiful it is: This was a perfect hike. It's just under 3 miles round trip and it's a steady climb all the way up. I had to stop a million times to catch my breath because my blood pressure has been through the roof lately, but that was okay.  It wasn't one of those hikes where you're like, when the HELL is this gonna be over?  No, this hike was challenging enough without putting me into whining territory.

Here we are at the top. 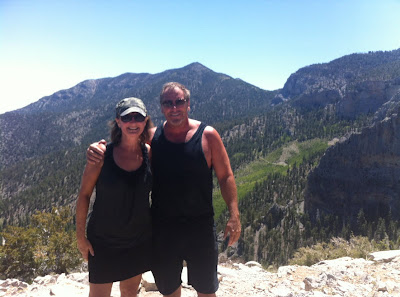 Be sure to click on the picture to enlarge it and you'll see that for some reason my mouth looks all black.  I don't know if it's a shadow or what, but it's weird looking.  Same in this picture: 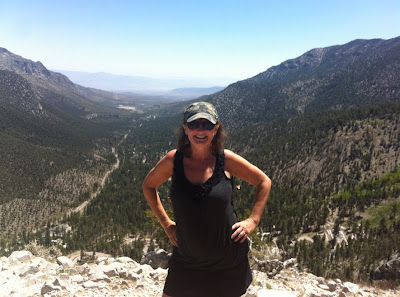 You can strike the sexiest hiking pose you want, but a weird black mouth negates it all.  What the hell?

On the way home we stopped in at The Resort on Mount Charleston and caught a set of a really good band with a tres sexy French woman lead singer. There's nothing like drinking beer in the sun while listening to good music. It was nice and cool up there and they had a yummy dark Lobotomy Bock on tap--a new beer to me, but you know I'll be looking for it next time I'm doing my weekly shopping at Lee's.

On the way home we stopped at Steak and Shake (like a Johnny Rocket's) at the South Point Casino and chowed down. The food was delicious, but I could have done without hearing the Bart Simpson-like burping emanating from the booth across from where we sat.  The first time I just rolled my eyes, but the second time I turned around, expecting to see an old man or a big fat tattooed guy but it was a young-ish tattooed woman. She probably could have kicked my ass, but I gave her "the look" anyway.  Believe me, I am an excellent burper myself and my kids and first husband could tell you stories of our pizza and Coke dinners every Friday night where I could pretty much rattle the windows, but for Christsake, in public?  That's just piggish.

Oh, I have a GREAT movie recommendation for you.  Mike and I watched God Bless America on Netflix Friday night and I swear I could watch it again right this minute.  It's about a middle aged guy and a teenage girl who, fed up with the stupidity of American culture, decide to shoot everyone who annoys them. It's like that Falling Down movie with Michael Douglas, but way more demented.  I can't watch a movie with violence, but this one is so over the top I laughed my head off.  Skip the ad and check out the trailer.

The lead actor is Joel Murray, Bill Murray's brother!  He's perfect.  This is a dark, pitch-black comedy written and directed by Bobcat Goldthwaith, who is far more talented than he gets credit for.  I've seen a couple of his other movies and they're awesome, too.

Check out God Bless America.  If you have a sick sense of humor--or have ever wanted to go ballistic on people talking during a movie--you will love this.

Hope you're all enjoying your Memorial Day weekend.  Hats off to our vets!

Everything Bobcat touches is gold!
I'll be watching this soon

grrouchie, I swear to God you will be thanking me eternally for this.

I believe I hiked the same trail you did - it was awesome! See here.

Yes, it's the perfect blend of challenge and pleasure! For me, anyway...

sounds like a great hike. But I didn't see the black in your mouth...are you hallucinating, girl?

That movie sounds great -- I just may watch it tonight! I have a totally sick sense of humor.

I LOVE God Bless America! I wasn't sure about the title but the movie was awesome! I laughed a lot! And thanks for the hike tip. I've never been but plan on it now. :)

We definitely share a similar sense of humor. I love that movie. We've previously established great fondness for Louie and Larry David. Do you like Jim Jefferies? He's far more foul, but I like his no holds barred approach. "Legit" turned me on to his stand up.

I remember you posting a while back about the lack of professionalism in the workplace - tattoos & piercings especially in the food industry grossing you out when you're trying to eat. Well, my neighbor had some men working on her air conditioning the other day & if I had encountered them alone in my home, I NEVER would had let them in! Just creeped me out! One was sporting a crome dome, lengthy ZZ Top beard, enormous black horn-rimmed hipster geek glasses & these huge silver dangling earrings on each ear - round like a soda can in thickness. His partner also sported a ZZ Top beard, but had greasy hair & was very short & walked with a profound, twisted limp. Like I said before, if it was me, I would have complained, but don't think it would do much good because according to the company info on their van - these 2 ARE the owners/operators. Yikes!

Forgot to say that a young man working for Prudential Realty showed up to give us our check & turn over keys the other day was scary! He looked like a complete meth head! Super skinny, really bad teeth & kinda shakey, I kid you NOT! Holding a clip board in one hand was the only was I knew he was legit after confirming his name & who had sent him. Honestly, this extra creepy counter-culture look is the norm & WE ARE THE FREAKS! Get used to it.

Oh, that's too funny! At least they're roofers and not waiters, right?

Kellee, I definitely need to check out Jim Jeffries. On my list!

I dunno about that, Linda. Remember, Elizabeth Smart got abducted because her father was too cheap to get a licensed roofer & paid some homeless guy (Mitchell) to fix his mansion-worthy house.