I bet Helen Keller would think I look young. And I'm a good singer, too.

Remember I told you I met fellow Las Vegas blogger Donna B after my show last Friday night? I knew I would like her! After you've been reading someone's blog for a while, you get the feeling you know them, and when I meet bloggers in real life, they're always exactly the way I imagined.

Anyway, the next day Donna sent me this really nice email. I won't post the whole thing, just my favorite line because you know, I'm so vain I thought that Carly Simon song was about me.

OMG, I was so freakin' psyched to read that I wrote back, "Donna, we must meet for dinner next week!" and then she wrote back and said good idea, as long as we go someplace close to her house because


"I hate to admit it, but I have slow growing cataracts."

One more thing. Remember this picture from a couple of weeks ago? 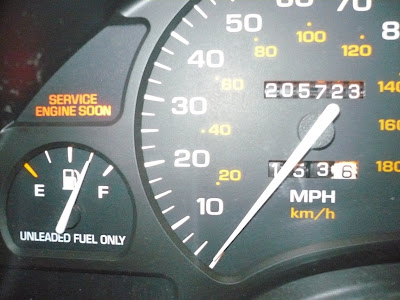 Okay, now look at this. 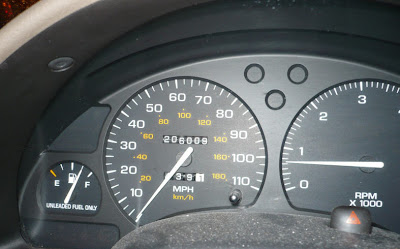 Notice anything missing... like the "Service Engine Soon" light? How about that? I swear, it was on for probably a year and now like magic it's gone. Imagine if I'd brought it in to the Saturn dealer--how much it would have cost? And there it just went and fixed itself. It's called the power of procrastination, people!

Is that cool or what? I was so happy I decided to take off the little piece of masking tape that's been covering these two little red lights, but damn, it was still on. So I'll just check back on it in a couple of weeks. That's called "patience."

Looks like my car's a little dusty, huh? I'll tell you right now, dusting my car is the last thing I ever think about. I put gas in it and every once in while put a couple of gallons of oil in, but that's about all I'm gonna do.

Hey, I have one more picture to show you--Courtney at seven months. 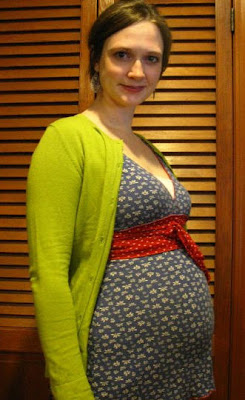 Baby Rice will be here mid-April--yay!

Beauty is in the cloudy eyes of the beholder?

She looks great....I'll bet you are so excited for that new grandbaby!

I agree with Donna opinion of you. Besides, what does acting like you're in your 50's look like anyway? Because being about to turn 49, I want to be prepared!

HAHAHAHAHAHA, I love it when the check engine light goes off!! Mine recently did some crap where it was blinking furiously at me the whole ride home. I was super paranoid, then the next day it wasn't on and hasn't come on since. Stupid car...

Oh and if you're acting like you're in your 30's, all the better. I wouldn't expect my Vegas Mom to be acting all 50 and shit. If I wanted that, I'd bring my own mother out there.....

Courtney is a cute pregnant mommy!

What a compliment...you act however age you want to act. That's the beauty of being yourself. You don't have to fall into an age category.

Look at that gorgeous belly!! I cant remember if you've talked about how she's going to have the baby? (bear with me, I like that child birthing shit)

And I saw your post title and thought "W-A-T-E-R....she signed water!"

Love her baby body!! You do look very YOUNG!!

LMAO.....that WAS funny reading it back...hee hee....I think it is cool we both have pregnant daughters, just another thing we have in common.

By the way, those two red lights you had covered up with tape? One means to add coolant and the other means your battery is getting low...not a big expense...GO TAKE CARE OF IT!!

You crack me up. I really enjoyed our dinner...wish Lisa could have joined us...guess we will have to plan another one....

Don't you love when people tell you how young you seem??? I'm glad your car is fixed, lol.

Great pic of your girl!