Linda talks politics? There must be sex involved.

Even if you don’t live in Las Vegas, you probably know that our city’s been experiencing particularly tough times. But it’s not just the city; the whole state is a friggin’ mess. What do you expect? Though admittedly he makes for a colorful character, our mayor’s a former attorney for the mob who openly admits to loving his booze (even when addressing a class of fourth graders). Last year Nevada Senator John Ensign admitted to having an affair with a former staffer, but supposedly there’s more where that came from. And our governor, Jim Gibbons, has a civil suit against him for allegedly assaulting and threatening rape of a Las Vegas resident in 2006.

Politicians don’t lie, so it must be true, right?

I swear, I was going in a whole other direction with this post. Totally didn’t mean to end up here. But since I did, let the record state (the record of my blog, anyway) that the biggest douche bag of them all, the King of All Douches, has got to be John Edwards. Edwards recently admitted to fathering his mistress’ child as his wife of how many friggin’ years battled cancer. And oh, yeah, this is all while he was running for president, to be the leader of the free world.

The silver medalist in this Olympics of Shame? Former New York governor Eliot Spitzer, who routinely banged a hooker. Yeah, every wife wants sloppy seconds after that. That governor of South Carolina—whatever his name is, the one with the Argentine “soul mate”—has nothing on him. (So Oscar Goodman likes to drink—big deal, huh?)

Let’s remember that Tiger Woods, as much of a train wreck as he is, is only a golfer. Sure, disappointing all around, but the bottom line is I expect more from elected officials.

And now for something completely different… a picture of Lori and Mom eating ice cream in frog pajamas. Yup. 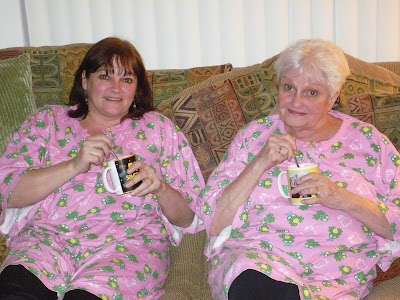 LOVE your Mom's face in the picture. It's like she's saying "get it over with now!". Cute.

I'm with you. I expect more from elected officials. It's terribly sad that those (the sex addicted, alcoholic, druggies) are leading our country. Makes me sick. Maybe the next generation will be better?

Love the "Congratulations, You're a Douchebag!" pic - truly classic! And, I agree about John Edwards. No one has surprised and disappointed me more than him. What a narcissistic a-hole.

Amen sista. If castration were the court ordered punishment for adultery the world would be a better place!

SC Governor, Mark Sanford just got confused... Argentinian Tail, Appalachian Trail... you can see where he'd get the two confused, can't you? ;-)

Edwards certainly deserves the Douchebag Gold... Not only did he cheat on his wife with Cancer and impregnate his mistress, he talked one of his campaign advisers into claiming paternity to throw the press off his trail. I'd say that's close to being a World Record Holder for Douche-baggery.

Could there be a hidden message here? You started with adulterous politicians.. and ended with two women.. eating ice cream wearing pajamas.. with images of frogs on them. Alluding to the princess that kisses a frog who turns into her prince charming then fools around with the maid? Or to suggest that 'I scream' when I finish reading the post? Pajamas? Sleeping around? When the marriage is as cold as ice? They're eating from coffee mugs... deception?

As for castration being the solution for politicians gone astray (as one commenter suggested), maybe the better solution is to only elect unmarried ones. With mustaches while we're at it. And who openly admit to their weed past and present (for medical and recreational uses... in THAT order). That way, people will be forced to only focus on their performance as lawmakers... and then they'd REALLY be disgusted.

I agree ...when are they going to learn. Love the picture of your mom and Lori!! Frog PJ's Cute!!