I had a lively conversation about this the other night with a new friend.  I'd love to hear your thoughts.

I'm not a religious person (duh), but I've often said I consider myself to be "spiritual," a word that kind of means whatever its user wants it to mean.  Most people think of spiritual as believing in some benign higher power or energy that, if not running the whole show, is at least trying to be a good director.  Along with spiritual, there's a lot of lingo like "New Age" and "metaphysical"that I tend to use interchangeably, though I know some smarty pants out there would be more than happy to explain the distinction.

If you've read my book, you know that I used to be pretty into that stuff--whatever you want to call it--and I still believe in a lot of it.  I definitely think there's something to The Law of Attraction, which basically states that what we attract into our lives is determined by the vibration we're operating at.  (I know I'm losing some of you, but stick with me.)  Ever notice that shit tends to hit the fan all at once? And when a lot of good things happen, you're on a roll.
So yeah, I get that.  I also believe there's a strong mind-body connection; we all know how great you feel when you're starting to get in shape.  I believe that your thoughts are powerful and can have a profound effect on your health.  Science has proven that stress is a killer, right?

A lot of New Age/metaphysical/whatever-you-want-to-call-it people believe that disease is caused by one's thoughts.  For example, I've heard it said that resentment manifests itself as cancer.  So let me get this straight...  people get cancer because they've done a crappy job handling their emotions?  It's their own damn fault?  See, this is why there's something called "New Age guilt."

These people also believe that one can "will" disease away with their thought patterns.  OK, I have no doubt that there are a lot of folks out there who have beaten the odds and who attribute their renewed health to a positive attitude and prayers from a loving support system.  And I believe those factors are essential--I'm totally on board with that.

But not everything is mind over matter, as they tend to affirm.  There are also a lot of people, like my Beautiful Aunt Joyce, who was the cleanest-living person on earth and who did every goddamn thing under the sun to stay alive--reiki, meditation, visualization, blah, blah, blah--and who died anyway.  Are you telling me she didn't try hard enough?  People who don't win the battle simply didn't think the "right" thoughts?  That they subconsciously wanted to die?  Sure, they went through all the motions, but they didn't truly believe they could overcome the disease, is that what we're supposed to think?

Again, do you see why there's something called New Age guilt?

I have a lot of friends who've been dealing with cancer over the past few months.  Thank God, Jesus, Buddha, Allah, and Bono--they all are doing well.  But if anyone tells me they've brought this onto themselves and if they have a setback it's because they're not adept enough at channeling the proper healing thought patterns, mark my words I will kick their ass. 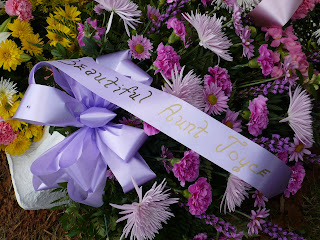 Yeah I'm with you on this one. (And I know what new friend you are talking about since I've had the same conversation with her for 30 years. LOL) I'm 100% in agreement about the Laws of Attraction. I am living that as we speak!

But no, I do not believe in the old "You brought it on yourself" or "You asked for this experience". You will never convince me that my sister willed herself to have a massive stroke that paralyzed her on one side and caused her to suffer for two months before dying. You will never convince me that 3,000+ people on 9/11 willed themselves into the path of a bunch of lunatics, or lost their lives due to negative though patterns.

Shit happens. It sucks and it's awful but it's part of life, and unfortunately sometimes, death. We all die. I don't believe that my inability to think positively all of my life is going to dictate how and when I go.

Sorry, I don't buy it. Nor do I buy into the "All is perfect and as it should be" theory. When my life has fallen apart around me and I've been in the most emotional pain of my life, there was nothing perfect about it, trust me. It may have lead to better days ahead, but at the time...nah. Far from perfection.

As well you should (kick their asses)! I can't stand self-righteous people who think that everyone gets what they bring to themselves. And so often that is their theory right up until something terrible happens to them.

I mean that kind of thinking is so backwards--if it's someone's own fault they have a serious disease, would it also be their fault if one day they're driving along obeying the law and some d-bag runs a red light and t-bones their car and puts them in a wheelchair? And what about children who end up with terrible diseases? Is it really their thinking that caused it? And if it is our thinking that causes the diseases to manifest, then how can we possibly get over the disease and our thinking all at once? It seems to me that theory sets people up to feel guilty about everything they do? How is that any different than old-fashioned Catholicism?

There is definitely something to be said about having a positive attitude--but I don't think that alone is what determines anyone's fate--just how they deal with things. If being negative meant one would (theoretically) die young or suffer from some horrible disease, then I highly doubt my grandmother would be 96 still living on her own (Bless her complaining little self!). In fact, it seems to be the negativity (which I can sometimes be guilty of) is enough suffering in itself—no need to add a terrible disease to it.

I have a very dear friend with several debilitating diseases: lupus, diabetes, and a host of other things. She's had it her whole life. The assholes who want to say that people create their own disease should try to explain this to people who were born with such conditions.

I would be right there with you kicking their asses!

I believe our thoughts and choices have consequences, but there are things called chemistry and physics which do what they want no matter what we have to say or think about it.

One thing I knew before my diagnosis and something I certainly haven’t changed my mind about in any way since being classified as a survivor is cancer is an equal opportunistic disease. By and large young/old, rich/poor, blonde/brunette , male/female, etc, etc, etc…bottom line it can strike anyone. I will admit that while in some cases there are “risk” behaviors that may be involved (cigarettes & booze); by and large it just happens. There is nothing in this universe that will make me buy into the fact a two year old with leukemia brought this about by their own negative thoughts or bad deeds.

I do think the right attitude has a lot to do with recovery, but so does your overall heath, diet and exercise, the medical treatments you receive and the support you receive from family and friends. I’d be lying if I didn’t say I think a bit of luck is involved too…for example in early diagnosis. However the bottom line is, if it's your time, it's your time.

I would hope that my experience hasn’t been in vain. I am of the mind that things happen for a reason, and usually some greater understanding is to be gained either personally or passed down as a gift to others. Part of the human experience is to question the “big why” to any type of tragedy personal or global. It’s too early for me to garner understanding of my personal cosmic why; I just hope I recognize it when it comes.

I'm with you. Yes, our thoughts are powerful. Yes, prayer is good. NO, I don't like to be around negative, bitchy people. Bottom line ... WE ARE IN CONTROL OF NOTHING. We're born, we live, we die. And I'm VERY spiritual. But you cannot change your destiny. I really believe that. Good people die young, horrible people live forever, etc., et al.

p.s. i hope YOU LIVE FOREVER LINDA LOU CAUSE I NEED TO LAUGH AT LEAST ONCE A DAY!

I'm with you 1000%. I am also not a religious person (anymore) and believe a lot of the same things you do but there are some physiological things that can not be changed. The Christian version of this would be after the person has died they say "she didn't have a strong enough faith, she should have prayed more". Silly.

SOrry I haven't been here in awhile, I should have more time starting NOW.

It's the one part of that philosphy I have the most difficulty with too. Very few people deserve death or disease (Osama Bin Laden deserved exactly what I got hence I say very few). I don't know how families get through it and my thoughts and praises go to individuals who go through it.

Beautifuly said Linda. My Step-Mom was like your Aunt. Her breast cancer fight took a lot out of her but she tried EVERYTHING to get rid of it. She was the most positive, clean living, supportive, loving person I'd ever met. But, she lost her battle (in October). I will never, ever believe it was because she didn't "think" right or "do the right things."
She was never afraid to die either. She just wasn't ready to go. That was the only source of her tears at the end.
I'll help you kick some ass if you need me!!!

I hear you Linda, and after a life-time of trying to understand death, here's my thought offering: there are many reasons why folks die, sometimes its their time to go, there is even the thought that this is the time their soul chose, and, if that's true, then it makes sense that the thought patterns that cause it would be used (subconsciously) to bring it on. Maybe some of us choose to learn whatever spiritual aspects (compassion for self and others, trust in god/universe/life etc.) the cancer offers them (on a soul level). And maybe that's bullshit too. But in that case, maybe the personality/ego/who we think we are would hate the cancer, maybe the soul self understands it differently, and is ok with it. How can we know? God bless your Aunt and may she rest in peace and hugs to you.

You kick away Linda, the dopey twats!!!
I just happened to be reading Motley Crue's infamous book 'The Dirt', yesterday and amongst all the drugs and groupies was a photo of the lead singer and his 4 yr old daughter. He'd written a heart wrenching, angry chapter on the time they discovered she had a huge cancerous tumour and after numerous operations, the happy, smiling, positive child could fight no more and died.
The little girl had nothing but positive vibes around her, willing her to get better and constant declarations of love from both her parents, family and friends.
I think the new agers are talking out of their bottoms.