A day (and night) in the life of a Vegas granny

I had the greatest time Saturday night!

Actually, the whole day was great. It started early; at 8:30 a.m. I was in attendance at the monthly meeting of the Las Vegas chapter of the National Speakers Association. The featured speaker was Steve Kaplan, who told us all about the construction of comedy. His presentation was so informative, I stayed for the afternoon workshop as well and picked up a few pointers to integrate into my own presentation for last night’s meeting of the Henderson Writers Group.

﻿﻿I was hoping to take a nap when I got home since I knew I had a big night ahead. One of my comic friends, Booya, masterminded a “Comedy All-Nighter” at Boomer’s, the bar where I first performed stand-up over 7 years ago. And I mean all-nighter—from midnight until breakfast at 9 a.m. I certainly didn’t plan on staying for the duration but I definitely wanted to make an appearance, so I was hoping to get in a little nap in the evening. Not meant to be—I was too wound up with anticipation.

At about 10:00, I hopped in the shower to revitalize and then headed over to catch the end of the Las Vegas Blues Society’s open jam at King Tut’s. What luck—as soon as I got there, my pal Rockin’ Billy and his band took the stage. Here’s a few minutes of their second song.

Rockin’ Billy is cool as hell; he was a big deal back in Chicago and has played with greats like Delbert McClinton and Stevie Ray Vaughn. We’re so lucky here to have such a great blues scene, as under-appreciated as it is.

After the open jam wound down, I headed over to Boomers and the place was hopping. The comedy had already started in the back room, but it took me a while to check it out since I got caught up talking with some old comic friends, including “Dr. Jim,” who’s not only an old boyfriend, but also the photographer who took the photo of me on the back cover of my book.

Sitting in the booth with everyone, I was just overwhelmed with joy. If you read my book you know that I started doing comedy during a real miserable time of life. I’d come to Las Vegas from Utah (of all goddamn places) after BH and I got divorced and I didn’t know a soul. I started going to open mics at Boomers just to get out of the house; little did I know how my life would change. The comics—we’re talking young guys, some younger than my kids—were incredibly sweet to me and they still are. I’ll always be grateful for their friendship.

Well, I finally got on stage at 4:45 and by then I was definitely starting to fade. I was amazed that the house was still full; it was like we were doing a telethon except there were no kids in wheelchairs. After my set I decided to call it a night, but I’ll tell you, this 53-year-old was pretty goddamn proud to be strolling in at sunrise. 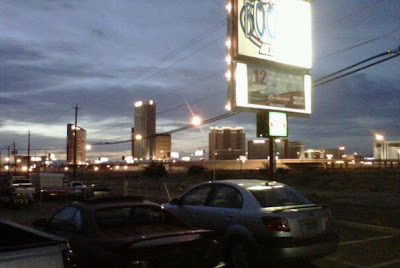 Hell, yeah, I still have it in me, partying like it’s 1979! Just your typical Vegas granny…

Needless to say, Sunday was a couch day.

sounds great. wish i could have been there. all night comedy sounds amazing. and "wow" to you for going on at 4:45!!!! bet you rocked

i love strolling in at sunrise. i love going to bed when the sun is coming up -- always have.

Your hair looks great in the "Gang" picture. Linda from WI.

Typical Vegas granny is right. Maybe it's the dry desert air or the bright neon lights but, in Vegas who wants to sleep. I need to move back I start fading after 12 hours of being awake and I am too young to feel that damn old. I hope to catch your comedy live one day.