A woman's place is in the (totally separate) kitchen

I'm digging life these days, what can I say?  People are much more interesting when shit is hitting their personal fan, but I'm happy to report that life lately is (yaawwwwn) pretty damn comfortable.

This is my third week of being out of work and I have no shortage of stuff to do.  Mike and I have been walking again--there's a great perimeter road near where we live--and every day our house looks more awesome.  The other day I super-cleaned the kitchen and then took a picture of it because, yes, I am that queer. 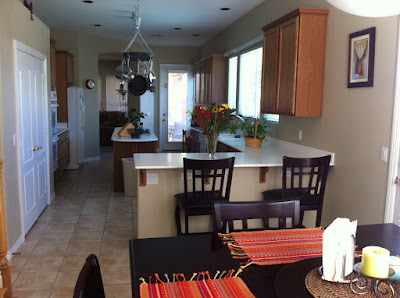 Do you know that this is the only house we looked at that had a kitchen completely separate from the family room?   (The opening to the family room is at the end of the kitchen.) The open floor plan model that's so popular these days doesn't sit well with me; who the hell wants to cook (which is bad enough in itself) and have to listen to whatever the kids are watching/playing on TV?  Mike's last house was like that and I was going positively bonkers. The old houses I lived in back East all had separate kitchens, and through they were pretty tiny, it was a much better setup.

I have fond memories of my mother sitting at our kitchen table on Lincoln Avenue having a cigarette and drinking coffee with Mrs. Sacca, the mother of mine and Lori's best friends, Donna and Gina.  This was back in the heyday of Mom's agoraphobia, when she was generally in a piss-poor "Jesus Christ all-goddamn mighty" screaming mood, so when we saw Mrs. Sacca strutting down the street heading for our house, we knew the clouds would part for a while.  There's nothing like neighborly gossip to lift one's spirits.  I can't image the open floor plan of modern houses being conducive to girl talk.

More about Donna and Gina.  My sister Lori and I have been friends with these girls since before Kennedy was shot, which means we've been friends for almost 50 years.  They're "Vatican twins," born less than a year apart, and are sandwiched chronologically in the two years between me and Lori.  They say no one knows your life better than a same-age sibling, and Donna and Gina know my life as well as I do.

Hey, am I the only one who's freaked out that it's been almost 50 years since Kennedy was shot?   Jesus H, that's just unreal.

Anyway, getting back to kitchens... Mom's house today in Boise is all open, but it works out great for her and Stepdaddy.  B.H. and I lived in a house in Utah with a kitchen/living room combo, and it was fine for us, but I still don't get it if you have a family. Mothers, and especially wicked stepmothers like me, need to stir the cauldron in solitude.  If a woman's place is in the kitchen, at least let us have some peace and quiet.

So what do you think? Kitchen/family room combo or a separate kitchen where all the cool friends gather at beer parties?

Just last week when Lori and I were at a party, I freaked out when someone asked how long we have been friends, and I had to answer "very close to 50 years!" I just love the long friendship we all have! Anyway, kitchens...my house has the separate kitchen and I love it!! If we're not all down in the party room or around a bonfire in the yard, all our beer party friends gather in the kitchen.

Your friend of almost 50 years,
Donna

In reference to you and Donna... 1) lucky both of you. and 20 Where the HELL would we all be without those long, long friendships that wind up being family in our hearts?

Sorry about the long reply. If ya want to delete it and leave it at this one--I vote for separate kitchen.
I had a friend who had a 4000 square foot home, with a great room, and a lofted "family room." She was so sad one day when some of us visited.

"There is nowhere to get away from them all." Her husband had turned their bedroom into HIS study and tv room. The kids' games and computers were in that lofted space. SHE had her little nook between the kitchen and the half bath, right where everyone walked to get into the kitchen.

I used to like the idea of the open floor plan until my parents moved into a huge house with the kitchen open to the family room (with vaulted ceilings). If my father is home, which is almost all the time, then the t.v. is on and it is blasting (since he has gone deaf from never wearing earplugs while building homes). Not only does the TV drown out any sense of calm in the kitchen, but in the whole house. Some days when I visit I feel like I'm going to lose my mind. I am now definitely a separate, but large, kitchen person.

Separate please!
Then you don't have the TV turned up every time the kettle is boiled or cooker hood turned on.

You are not the only one that likes them separate. I never did like to listen to my own kids when I was making dinner. Plus trying to help them with homework and the t.v. going didn't help any. So yes I do agree with you.

We are so lucky to have Donna and Gina for so many years! It doesn't get any better than that!!!