So doesn't it just figure that I get my picture taken with comedian George Wallace and my bra strap is showing and my hair is flatter than usual and my arm looks fat and I have a weird look on my face? 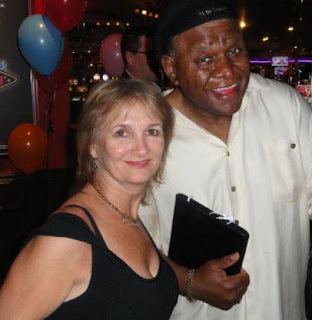 At least my eyes are open.  I seem to have a sixth sense to close my eyes just when the camera clicks.

This pic was taken at the same event; there was a balloon comic demonstrating his artistry.  He threw a million of these off the stage.  You'll appreciate it only if you saw the video I linked to in Saturday's post.  Sigh... I am so not right.  But at least I look thin. 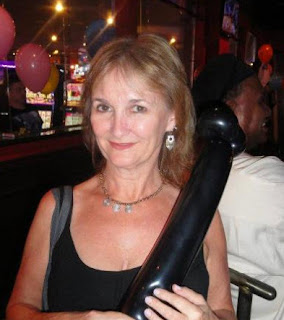 I haven't done an open mic in ages, but decided to check out a new stage last Sunday night.  The minute I finished, a black comic I'd never met darted over and asked if I could do a set on his stage in May.  Hell, yeah!  Black people love me.

What else... Oh, I saw a movie I really liked--Jeff, Who Lives at Home.  I love small, independent films; they're quiet and more real.  Jason Segal is a doll.  He was also in I Love You, Man and Forgetting Sarah Marshall.  I hope he doesn't get too overexposed; I don't know about you, but I've had all the Seth Rogen and Jonah Hill I can take.  They're both talented (and Seth Rogen is Canadian, in case you didn't know) (I love Canadians), but enough is enough.

Last night we had family movie night with the kids (yeah, I wrote that in the same post as the picture above).  We watched one of Mike's favorite movies, August Rush.  HATED IT!  Really, I'm supposed to believe that?  Just more fuel for Mike's belief that I'm cold and heartless--I laughed at the corniness of his all-time favorite movie, It's a Wonderful Life, which he made me watch with him a couple of Christmases ago. I can't help it; I didn't think it was all that.

I admit, the window is open just a crack when it comes to things I like. That goes for music, movies, food, TV shows, books...  If someone says, "Linda, do you like... ?" I can pretty much guarantee the answer is "no."  Especially if the rest of the world seems to love it.  Guacamole, Star Wars, American Idol... I liked that famous song by Adele, but I wouldn't listen to the rest of the album again.  I read one Nicholas Sparks book and thought it was drek.  I'm a pain in the ass.

Sometimes I feel like a female Larry David.  That's a good thing.  Yeah, I'm your Caucasian. (You have to be a Curb fan to get that.)

Have a great day!

yeah, that first photo is not your best...but the boobs look fantastic!

congrats on being invited to appear -- that's the best compliment ever.

Well,you always make me laugh and I hate everything too!
SMOOCHES!

Stoppit. Your arm does not look fat, you look great.
I must be half asleep here, I was thinking a black comedian was like some kind of depressive comedian, like "black humour". Doh! Just as well your next sentence was there.
Time for bed!

You're my caucasian.
I'm your biker. That's it!

@ Tara: I know! I was thinking, "Well, at least the boobs look awesome."

@ Debbie: I think compatibility is not determined as much by common interests as things you both hate.

@ Mimi: Black humor! That is so funny.

@ Lori: You are my biker, that's for sure! I think the only movie we've ever agreed on is Pee Wee's Big Adventure.

'Random Crap' would be a good title for my Monday rambles at 'Bikini Hill'... :) I'm curious about what you thought of the movie 'Bull Durham' and the t.v. series 'The West Wing'...

I thought Bull Durham was great! Susan Sarandon is (still) HOT and the chemistry between her and Tim Robbins (cuuuuute!) kept the movie sizzling. As for The West Wing, I'm probably the only person on earth who's never seen it. I know it had a fantastic cast, though, and I'm sure it was well done.

AUGUST RUSH could easily have been titled SUGAR RUSH.