From my brain to God's toilet

Please just bear with me while I let some random crap spill from my brain.

1.  Do you absolutely hate the trend toward the "open design" workplace?  As if cubicles aren't bad enough, they're breaking them down so now everyone can see everyone else floss their teeth or do God knows what else at their desks.  Glass offices are part of this brilliant concept, too.  Personally, I'd rather work in a Mississippi cotton field.  This is just weird, people. 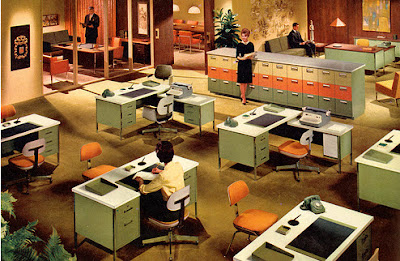 2.  Speaking of weird, is HDTV a little creepy?  I swear, I don't see people standing three feet away from me as clearly as I see the lines on Anderson Cooper's face from across the room.

3.  Speaking of TV, remember how Mike called our cable company and asked for a lower rate and they gave us HBO for free for 3 months?  Well, sure enough, there was a charge for $14.99 for HBO on our last bill, so I called and said what the hell?  So now they're giving us HBO, Cinemax, Showtime, and Starz for free for 3 months.  We'll see what the next bill says, though...

4.  Speaking of Anderson Cooper, I would totally love to stay at The OUT NYC hotel, New York city's first gay, but straight-friendly, urban resort.  Come on, you know it has to be well designed, right?  But I'll bet you a lot of people would totally not stay there.

5.  You know how sometimes things just ring true when you hear them?  In Starbucks yesterday, a guy was talking about health care and said, "American doctors are taught only three things:  cut, burn, and poison."  I'd never heard it expressed that way, but man, I think he nailed it.

6.  I was getting my hair done recently and the woman in the chair next to me said in November 2010 her husband was given 3 months to live (cancer--what else).  His doctor, a guy from India, said there was nothing more he could do, but suggested he take Chyawanprash, available at any Indian grocery store.  It's a food supplement with herbs and spices that he said his grandmother used to give to him back in India.  Well, November 2010 was more than a year and a half ago and the woman's husband is still alive.  She said everyone in her family takes it and they feel great.  And their hair is thicker.  Of course, I stopped at the nearest Indian grocery store on my way home.  Of course, I also bought some Indian shampoo because you never see Indian women with fine, thin, limp, shitty hair.

7.  Chyawanprash tastes like drek, but I bet it's good for you.  I'll also bet you almost any disease could be cured by a concoction involving baking soda, vinegar, or petroleum jelly.

8.  Speaking of concoctions, does anyone remember Save the Baby?  I didn't think they sold it anymore, but evidently you can still get it online.

9.  Do you have little brown spots on your face from the sun?  I do.  My mother's grandmother used to say you can get rid of them by dabbing them with your spit first thing in the morning before you've eaten anything.  Supposedly, your "fasting spit" is full of acid that will lighten those spots.  So now I'm starting each day with a face full of gob.

10.  Speaking of Mom, she's doing well.  She says she feels better than she has in 6 months.  Thank you again and again for your good wishes!

If you are looking for some magic salve I would be happy to bring some to Las Vegas for you. Totally organic, cures almost anything, great container. But oops ... you've got a guy, so scratch that idea ... lol.

Hi Linda, delighted your Mom is doing well. Are you recommending that Indian herb to her too? I've not heard of it, but might tell my friend about it, whose nephew (15) is very ill.
LOVE the first pic, there's none of the Friday slouch about that office, they all look so happy to work there. And the guy who's waiting looks so patient!

That office is brutal - you'd think everyone could hear everyone else's face-to-face and phone conversations... No privacy at all. Interesting health tip...

I'm highly skeptical of #9. For years my wife has been spitting at me first thing upon awakening every morning, and I still have those little brown sun spots on my face.

Hey hey, happy your mommie is doing so much better. If I had a job I'd get those dark spots on the side of my face from driving zapped with a laser, I'd have an eye tuck and the fat from under my chin sucked out. I hate the open complex for the work place. Just another way for them to watch dog you, and that Indian stuff sounds mighty interesting. I'm going to have a pedicure today to make myself feel better! Freshly painted toes always works for me.
XOXO
Deb

The 'open office' concept is Corporate America's attempt to watch the employee's every move, right? One of my previous employers tried to force me to work in such a situation and it was ludicrous -- no way, Jose! I'm sure glass walled bathrooms at work are next -- gotta know what you're doing every moment! Geez Louise!!!

Chyawanprash tastes like drek, but I bet it's good for you.

I think it's somebody's law that anything good for you has to taste bad.

@ Mimi: I'm so sorry to hear about your friend's nephew. I hope they leave no stone unturned when it comes to his treatment.

@ Coach: No kidding. I would never be able to work like that.

@ Mr. Subliminal: Hmmmm. Quite a mystery there.

@ Debbie: I know what you mean!

@ Dangerous Linda: You said it, sister!

@ Memphis MOJO: Agree. It's actually on the books.

Shit, I want thicker fuller hair, I'd also like it to stop thinning and receding but I'll start with thicker and fuller.

I think I need to go to the India Bazaar in Albany and try and find that Chyawanprash (even if it's just for the benefits for my hair!).