Here you go, folks.  The post you've been waiting for. You know how much I was looking forward to our trip to California with the kids, and I'm happy to say I survived.  We got up early on Sunday and headed for Universal Studios in Hollywood, which, even though I cannot stand theme parks, I actually thought I might like.

As a Highly Sensitive Person, it's hard to like any situation that involves a lot of noise and commotion.  Or racket, as us old people call it.  And Universal Studios is LOUD!  Just people and noise and busy-ness everywhere.  And waiting in lines forever for shit that, to me, wasn't even mildly amusing. A couple of the attractions we saw were not only loud, but pretty violent, which I really can't stand.

[Disclaimer:  In all fairness, I don't like anything; I'm tough to please. I wouldn't be able to ingest enough LSD or heroin or Oxycontin to find the Bellagio fountains or the lights of the Fremont Street Experience even remotely entertaining.]

There was one special effects show that was interesting, and I guess I expected Universal Studios to be more informative, like maybe with exhibits about the movie industry.  But it was all rides and goofy stuff.  We went on the tour, but aside from some cool 3-D effects in a King Kong tunnel, it was pretty lame.

And then there's the Curious George house, described on the website as "thousands of flying foam balls in this wild play area just for kids… and the young at heart."  Or as I call it, "Hell."

Seriously, this park has to be the noisiest place on earth.  I can't stand loud movie soundtracks, and they were playing everywhere.  Toward the end of the day, I suggested we check out the animal actors show, thinking it had to be a little more subdued.  While sitting on the bleachers waiting for the show to start, I whispered to Mike, "Is it me, or does every third kid here look like Manny from Modern Family?"  He laughed and then casually said, "You know, I think this show involves birds flying around..."

Good-bye!  Oh, hell, yeah, I left the family and made a beeline for the Irish pub on site (thank you, Jesus) and enjoyed a ten-dollar Guinness that I would have joyfully paid twenty for.  I sat there sipping my dark drops of pleasure, cherishing every swallow, but my bliss was ruined when I checked my email and saw this message from my sister Lori:


"Jackson Browne and Lucinda Williams are at the Hollywood Bowl tonight."

And later when we passed the freeway exit for the Hollywood Bowl on the way to our hotel in Anaheim, a lone tear fell down my cheek, just like the Indian in the don't-be-a-litterbug commercial from the 70s.

After Universal Studios I thought, how bad can Disneyland be?  The complex actually encompasses Disneyland and the California Adventure Park, which we checked out first. It was really okay; not too noisy or crowded. We got hip to the free Fast Pass system and didn't have to wait around too much.

Here's my grandson, Connor, proudly wearing this very cool t-shirt I bought for him the day before in the Kwik-E-Mart at Universal Studios.  As you can imagine, he got many compliments!


The kids were happy to go on the rides and I was happy to find a vendor nearby selling Sierra Nevada Pale Ale.  I was thinking, this isn't that bad after all.  Yup, all was well... 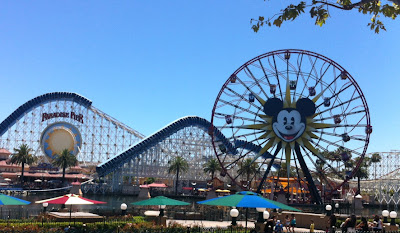 ... until we left California Adventure Park and went into Disneyland.  OMG.  It was worse than I expected.  The crowds, the lines, the noise... I can't believe people actually go there on their own free will.  I remember we were in line for the Pirates of the Caribbean ride when I started to "go bad."  But I kept a happy face.

Disneyland was so congested, I couldn't take it.  Finally, we went back to California Adventure Land and stood waiting and waiting for the Bellagio fountains-like World of Color show.  I'll say no more.

Afterward, I was a complete mental patient on the inside and could hardly maintain my fake smile.  It was close to 10 p.m. and Mike and his 11-year old son still had tickets for the Twilight Zone ride.  Connor wasn't interested in that, so he and I and Mike's 7-year old daughter found a place where we could sit and wait for them.

As we waited, the little one fell asleep with her head in my lap and Connor and I talked about our favorite Family Guy episodes and how freakin' awesome the Ted movie is gonna be based on the trailers we saw on YouTube.  Then he rested his head on my shoulder and said, "Granny, you're my BFF. I wish there was a Fountain of Youth so you'd never have to die."

Awwwww...  My sweet boy.  My heart filled with joy.  So I did have a magical Disney moment.

But the truth is, he could have texted me that sentiment and I'd have been just as happy.  No, we definitely didn't have to go to Disneyland for that.

And now I know how it all went!

OMG. FML indeed! Now, if you could have only found a Joe's Crab Shack to have dinner at, your overload would have been complete.

I HATE those places. LOATH, DESPISE, ABHOR. You are a good grammy, so good. Mike has that 'thousand mile stare' going on in your photo, and I can just imagine what was going on in your head!

Your BFF moment has got to be one of the sweetest things ever. That child is an angel!

I could see the cartoon-like cloud of smoke you must have left when you heard there would be birds flying around during the show.

You crack me up so much.

i haven't had a drink in two years, but i might have joined you for a belt at the pub after that day!

I'd have been in the bar all day. But that's just me. LOL

OMG I LOVE DISNEYLAND!!!! I've been to Universal once and I loved that as well. Ok, here's the thing. ONE NEVER, EVER GOES to Disneyland or Universal in the summer! That is key. You must go in the fall when school is in session and there is nobody there, you can get on all the rides without waiting a hundred years and it's not blazing hot. I GUARANTEE YOU .... A MUCH HAPPIER EXPERIENCE.