If you disagree with me on this, I'll be secretly wondering HTHUCBSS

My favorite professor when I was in grad school at RPI once told me, "Linda, when you think you're right, you're right.  And you can't believe anyone could be so stupid to disagree with you."

That was a good 20 years ago, and no truer words were ever spoken.  I usually think things through and weigh all the options (I'm a Libra) and go back and forth until I make myself crazy, but when I've come to a conclusion about something, nope, I can't believe other people can't see it the same way.

You know how on job interviews they ask, "What are your strengths and weaknesses?"  I swear, for weaknesses I just want to say, "Well, when someone disagrees with me, I secretly think they're retarded.  Sometimes not so secretly."

Anyway, here's something I think is stupid as hell and I can't imagine anyone could possibly disagree with me.  At the beginning of 2012, the hotel and casino known since 1971 as the Las Vegas Hilton lost its licensing agreement and is no longer affiliated with the Hilton empire.  Around that time, I started noticing billboards advertising "LVH."  What the hell is that, I wondered, until I found out that the Hilton is now known as the LVH, which stands for "Las Vegas Hotel and Casino." 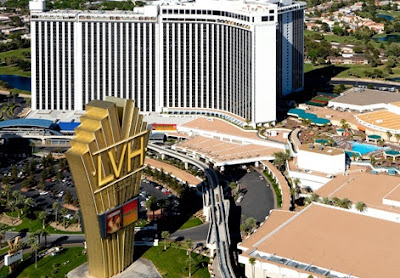 OH, MY GOD!  Is that brilliant or what?!  Imagine a group of corporate brainiacs around a conference table holding a creative brainstorming session and THAT'S the best they could come up with???  Evidently they didn't envision this potential conversation between two tourists:

I kid you not.

Somebody needs to bring in the Groupon or Living Social copywriters. I can't believe I'm saying this because their overly-flowery descriptions are so annoying, half the time I can't even tell what the friggin' deal is, but I'm starting to think maybe there's a place for those people after all.  You know, before Circus Circus rebrands itself as "FML."

I totally agree with you, LVH is terrible - I bet you have similar sentiments about "The D" aka the new Fitzgeralds Downtown?

I saw a tee shirt today:
"If I agreed with you, then we'd both be wrong."

Don't forget about The Hotel nonsense as well.

Jazzy Cazy, you're more up on things than I am. I had no idea that Fitzgerald's is now "The D." Stupid. Must stand for DUH!

Memphis MOJO, thanks for commenting. That t-shirt was made for me! Do you think it comes in cute little petal sleeves?

I think if they are going to redeveloped a hotel they should just keep the same name for it. You are right with what you are saying. I agree totally with you.

That is amazing, in a nonsense way!
Agree with you about the flowery descriptions on LivingSocial and Groupon, btw, they're hilarious!
And, cos it's freezing here (almost like winter, seriously), I'd love your header!

Sometimes this beautiful city of ours takes two steps forward.
Sometimes it sticks it's own head up it's own ass with stupidity!

FML made me spit water all over my monitor!

SMH. And I do mean smfh!!! I always had this notion in my head that Vegas was the center of the USA. For instance, it's open ALL the time (some of us refuse to yield and conform to society's ideas of normalcy and 9-5 hours.) It is a booming town, meaning more people visit there than any other city. (I guess NYC could very well the #1, don't care) But, most of all it is home to me and therefore NO other city (and I've lived in some of the smallest and biggest in north america) meant as much to me as Vegas. The other day while talking to mom I was forced with a realization that the only reason I want to go back there is for my family (grandparents, mom, brother) These acronym casino's are just another scoop of shit on an already shitty sundae. I can't imagine anyone staying in any of those hotels but, who knows the way they are going it won't matter because technology will take over and these sheeples won't bother leaving the comfort of their own computer and go out and live life. Now I have to think really hard where it is I want to move. I once envisioned Albuquerque but, alas the racist state of Arizona is now a no go for soooo many reasons.

I don't see anything wrong with the rebranding. Of course, I also refer to your blog as LLLLV.

@ Tender Heart Bear: I can see why they'd need to rename a place if it changed ownership, but jeez... put some effort into coming up with a new name, huh?

@ Julie: Water, really? I have a feeling it was vodka.

@ Jen: Good news and bad news. Albuquerque is actually in New Mexico, but that state is also a mess. I have a friend who lives there and she says you're taking your life in your hands on the roads--drunk driving is a major problem.

@ lightning 36: Thanks for commenting! I, too, think there's nothing wrong with rebranding, but (again) put some freakin' effort into it!

You have to admit, though, that LVH beats "M".