So back to Kim Kardashian's big ass...

Note:  Sorry to my gay and lesbian readers for this distinctly heterosexual post.  Please feel free to comment and enlighten us as to how things roll from your perspective.

I loved the comments everybody left on that "T vs. A" post last week. It looks like guys go more for the rack than for the back end.  And why I didn't post this photo instead of the one of Susan Sarandon, I'll never know. 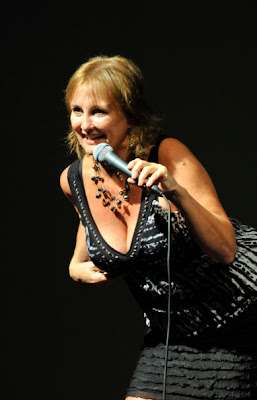 Actually, at that angle, it kind of looks like I have a big ass myself. But I DON'T!!!

Reader TAD offered some valuable insight on the topic:


"Yeah, I really like a nice rear view. But what's up front counts too. But it's a package deal -- I also like a cute face, lotsa hair, a warm personality, a woman with a brain in her head & a sense of humor...."

Lotsa hair?  Oh, shit. But have no fear; TAD puts in all into perspective in a subsequent comment:


"P.S. -- This whole 'body image issues' area is a real minefield -- which unfortunately women take MUCH more seriously than men, whether due to societal pressures or fashion or whatever. As long as a woman Has The Parts, most guys likely won't complain much. Remember what Julia Roberts said in EAT, PRAY, LOVE:  'In all your vast experience of taking your clothes off in front of gentlemen, have any of them ever left, or asked you to leave? No. You're naked and you're in the room -- they've won the lottery.'"

That is so true!  If we only knew how little men actually give a shit about everything we fret over. We make ourselves crazy! I wonder if guys have similar insecurities when it comes to women.  They must, right? Well, here are three things that I personally think men can chill over.

Losing their hair.  Maybe it's because I have such shitty hair myself, but I think baldness is no big deal.  Bruce Willis is just as sexy as George Clooney. Please, I beg of you, don't lose sleep over your hair.

Their weight. I admit, I prefer a beefy boy.  Morbidly obese is not good, but a bit of a gut is manly. I've said this in a previous post:

"The male body in itself means nothing to us because a body is just a body; women don't get turned unless there's an emotional attachment.  Even when I was single, I never had any desire to see the Chippendale's or Thunder Down Under.  Why would I  be fawning over someone I didn't even know?  Besides that, too-perfect male bodies are intimidating to us; we're not secure enough about our own bodies to be with, or even appreciate from afar, a guy's body that's too sculpted.  Not to mention, we also presume there's underlying ego issues beneath all those muscles and all that time in the gym that we simply don't want to deal with.  Real men have meat--and fat--on their bones!

"Seriously, give me a guy with a gut any day.  To me, that's the sexiest part of a man.  I remember when the Crocodile Hunter died and they were showing a clip of him wrestling a croc in the water and his shirt came up and revealed his stomach--I was like, god-damn, that's hot!  Manly, yes!"

How much money they make.  First of all, wealth is measured not by how much money you make, but how much is left over after the bills are paid. A guy who makes great money must have a skill or area of expertise that's in demand--and that's attractive--but points off if he is deep in debt because of impulsive spending or poor money management. On the other hand, a guy who makes much less can actually end up with much more when you consider the bottom line.

On the other end of the spectrum, here are three automatic turn-offs:

Unkempt hands and feet. I think I speak for all women when I say that if a guy is dire need of a manicure, those hands are going NOWHERE! And long fingernails are as equally repulsive as dirty nails. Blech! And if your hands are good, but your feet are nasty, you'll never get us between the sheets.  We'll be worrying about those things touching us the whole time.

Hands that are always touching his nose. Two words: STOP THAT!

Bad table manners.  Now, talking with your mouth full of food is an obvious violation, right? Here's something else, and this drives me batty: Never, never wipe your nose with your napkin and then put the napkin on the table.  (That, of course, goes for everybody.) I can't tell you how many times I'll be in a restaurant and someone does this.  I wish I had the nerve to say something, but I just seethe in silence.  That's just gross.

So that's my little rant for the day.  What say you?

Comment from the resident Lesbian: I think for men and women, gay and straight, bottom line is it takes all kinds, and you can be very physically attractive until you open your mouth and spew something arrogant or awful.

I have always been attracted to the person, and they've come in all shapes and sizes and both genders. Seriously, I used to be with a obese woman who I found very attractive because she took good care of her appearance and had a great personality.

Excellent job. I especially like the way you are talking about "me" throught the entire blog . Linda, I never know you felt this way. Very flattering .

That business about being in the room pretty much sums it up for most men, I think. For them until they stumble across the one they could actually love.....it just about getting laid!
Doesn't much matter what they look like at all.

One the opposite side THE worst turnoff is bad breath. Gag me with a spoon!!! (I haven't said that since around 1975! lol!) Runner up B.O. (SHUDDER) Ick!

Great pic of you Linda! The look of total enjoyment on your face is lovely.
I don't like a big gut on a fella, but at the end of the day, it's more about the person for me. Except bad breath, couldn't take that at all.

I agree with you about the weight on a man and on the hair loss. To me it really doesn't matter how much money they make but not to be in debt real bad. The thing about the hands and feet, my boyfriend works in a factory and he comes home with ink and grease on his hands. Thant does not bother me at all because I know he has washed his hands before he left work. That also shows me how hard he work every day. My dad worked for the Chicago Tribune and he came home the same way because he fixed the machine so the paper would get out. These are two very hard working men in my life and that is why dirty hands does not bother me. I do agree with you about the table manners.

Wow Linda...those are some seriously sexy boobs! That has to be one happy hubby over there!

I am also a total package guy. There is always an outstanding feature that attracts the eye but there has to be something more than that. And yes, I love that picture too!