I'm still trying to catch up from the weekend. Yesterday was a full day and night, but I've cleared my calendar for this evening so I can (finally) see what's going on with my friends in the blogshpere. I feel so out of touch!

Speaking of my blogging buddies, here's a picture of me and Debbie Schubert, whom I met Sunday in Pennsylvania. She's the cutest thing. 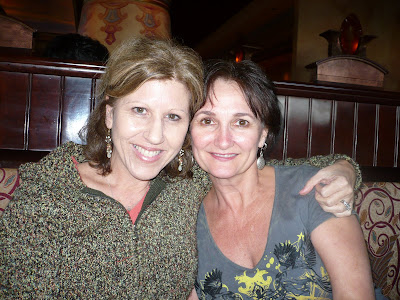 And here she is with her husband, Chuck. I'd love to see them play their music together. So nice to see a couple so happy after over 25 years of marriage. 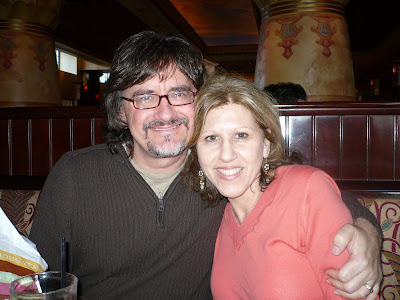 Debbie told me they got together the day John Lennon died. Of course, I remember right where I was when I heard the news; a cashier in the Madison Avenue Price Chopper in Albany told me. That was one of many major events for which I'll always remember where I was. Here are a few more:

The day JFK was shot: I was in gym class in first grade.
The day the Challenger blew up: I was working in a Planned Parenthood clinic (how ironic, considering I had two kids at age 21, huh?)
The day Jerry Garcia died: I was in the car picking Courtney up from her summer school class at Hackett Middle School.
The night Princess Diana died: I had just come home from seeing Ulee's Gold at the movies
9/11: I was in Laramie, Wyoming. My ex and I were going to do a yoga video and when we turned on the TV the first tower had fallen.

And damn it all, yesterday another event occurred that I'll always remember:

Yeah, yesterday I was bumming about leaving Beautiful Aunt Joyce and being back in my stinkin' cubicle. I had lunch with my BF and told him, "You know, I could just burst into tears at any moment." He took my hand and told me he loves me, because he's so friggin' awesome, and then when I got back to work, I had an email from my friend Wendy in Wisconsin saying Guiding Light is going off the air in September.

I am pissed as hell. They can't do that to my friends in Springfield! Believe me, this will be a whole separate post. (I know the guys can't wait for that one.) The only reason I'm not totally freaked out is because I saw on Facebook that they're trying to find a new home for the show, so maybe another network will pick it up. If they're smart.

So how about you? What events do you remember exactly where you were? And is there anyone else out there who watches Guiding Light?

Oh, I remember events well. I remember being at work when the Challenger exploded. I remember being at work when my receptionist walked in and said "I just heard on the radio that a small plane flew into the World Trade Center..." and I happened to have a small TV in my office and we turned it on and a few minutes later watched the second plane and knew our world was changing. I was in my basement on the computer when the news of Princess Diana's death was released. I was in college in the dorm when John Lennon was killed.

Have never watched the Guiding Light. But if they ever take General Hospital off the air, I'll be mourning right along with you.

Did you see my new blog layout?

How much fun was our meeting on Sunday??? Loved it! Sorry about Guiding Light. I was an ABC girl - All My Children, General Hospital, and my favorite, One Life to Live. I hope GL finds a new home.

PS: Give Lori our best!

When Reagan was shot I was in the living room watching TV with mom while she was ironing. (funny thing to remember) I was in class in high school when Challenger blew up. I was telemarketing (here in Idaho) talking to someone in California when the big earthquake hit Cali. I was on vacation - a cabin in Minnesota - when 9/11 happened. I turned on the little TV to find PBS for my toddler, just in time to see the second plane hit the second tower.

Debbie and husband are adorable - I am happy to hear you had some positive experiences while visiting your aunt - cancer is a black hole of negative energy that can suck in everything around it. Sounds like your aunt is a worthy opponent. I am rooting for her.

I heard about Guiding Light too. Don't watch it but do tune into the Young and The Restless. Maybe this is a way to get those daytime ratings up? (you could hope) Hasn't that soap been on FOREVER?

I remember the day Kennedy was shot as well as the day of his funeral. I was 9 years old and sitting in my fourth grade classroom when the teacher walked in crying.

I remember when the Challenger blew up. I was 32 and engaged to be married to an a$$hole... Glad I didn't marry him.

I remember the day the Twin Towers fell to ashes. I was 47, stunned, at home alone, called my husband and then watched a plane crash into the Pentagon. I called him again and told him to come home. We lived 30 minutes from the Pentagon.

Probably other happenings as well that I can recall exactly where I was.

I don't watch soap operas but I'm sure the cancellation of The Guiding Light is a sad day for many.

I remember the day Elvis died and I couldnt understand why my oldest sister was crying and crying over some fat old guy (yes the horror particulalry as he was only 42, yikes!), I remember the day John Lennon was shot (he was my favourite Beatle and I loved his poetry - did you ever got to Yokos blog - interesting woman - my mother was right into all their movies, music etc), I remember I was sitting in my loungeroom when I turned on the TV and heard about Diana, I remember I got woken up by my daughter about the Twin Towers as we had been there two weeks earlier.

We never got the Guiding Light here but we do get all the others I have to say. Hope it turns up somewhere else.

Oh I love Debora's blog too and its great to see a picture of you together! She and her husband's music is amazing. Such talented people in the blogosphere.

I remember all those things except Jerry Garcia (sorry!). My John Lennon story is too eerie, and it takes forever to tell the long version. But at the moment I heard he died I was listening to him AND staring at a charcoal sketch of him that my artist friend had just finished.

I am so sorry about your show! Someone else will pick it up!!!

When the Challenger blew up I was in 7th grade Science class.

When Princess Diana died I had a friend in town from MI and we were out drinking so I didn't know until the next morning when I got the paper.

When the towers fell I was working as a contractor at an electric company installing their AP system when my soon-to-be-ex-husband-number-one called to tell me the tragic news.

I use to watch GL with my sister. So sad to see it go, even if I am a huge DAYS fan.

Oh I'm a date person who remembers everything, but only on break and wanted to touch base and when I heard about Guilding Light I thought it was a April Fools joke...I'm sorry, I wish it was. I like ABC soaps myself and that started in Senior year in High School (we had a TV in the lounge) before that my mom always had on Secret Storm and Edge of Night....

Secret Storm and Edge of Night--those are old ones! My grandmother used to watch them. Soaps were an oasis in the housewives' day!

I was babysitting your kids the day the Challenger blew up. I can't remember if it was during winter break or if it was a snow day. I just remember watching it in your S. Pine St. apartment.

Although I haven't watched the Light in YEARS, there will always be a place in my heart for it. I watched it with Granny, Mommy, the sisters, and your kids when you were working and they had to report back to you the details. Thank God for DVRs!

I guess it's just me and you in mourning. I have to check in with their site to see how the search for a new home is going. And just when all the "old" familiar faces are reappearing!!! Waaaaahhhh!!! There now I feel better.