Buns of Steel, here I come!

At one point during the Leonard Cohen concert last Sunday night, two of the backup singers did a cartwheel together. (I told you this show was amazing.) Their agility prompted my boyfriend to whisper, “Can you do that?”

Easy answer. I told him I haven’t done a cartwheel in probably 20 years, and attempting one now would certainly land me in traction for the rest of the summer. No, cartwheels are a part of my past that I’m sure I’ll never return to. Just like Coors Light. But then I started to wonder, “Can I still do a split?” Hmmm.

I never thought I’d say this, but… I may be getting old. 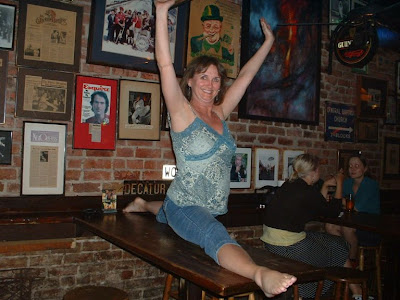 The ability to do a split has always been my personal barometer of aging; as long as I could still entertain my friends and family by making an a-hole of myself on the dance floor (or in this case, on the bar) at the end of a particularly spirited song—usually courtesy of Talking Heads or some zydeco artist—I knew my youth was still intact. But the truth is, I’m not sure if I still have it in me. That’s a scary thought.

My sister Lori snapped that picture back in May 2005 when I was a mere 47 years old. A bunch of us were in Molly’s on the Market, our favorite bar in the French Quarter of New Orleans. We go down there every year for JazzFest. Well, almost every year; since 1994 I’ve missed only three.

I don’t think I’ve done a split since that afternoon in Molly’s, which by the way, is also the last time I almost got kicked out of a bar. (Yeah, I’m someone’s granny.) Anyway, I’m not sure I could do it right now, and that’s a sobering thought.

Three weeks from today, we’ll be back at JazzFest. I’ll be dancing my ass off, and whether or not I actually do another split on the bar or somewhere else, I need to get in better shape. Nearly stroking out during last weekend’s hike up Camelback Mountain (while my boyfriend just breezed along) was a major wake-up call. So last night I took out the big guns.

My Buns of Steel video.

I’m telling you, if you want to get in really good shape in a hurry, the original Buns of Steel video with Greg Smithey is the way to go. It incorporates everything—aerobics (which I hate), stretching, isometrics… and it works the arms and abs as well as the buns. I swear, of all the exercise and yoga videos I own, this one is the best bang for the buck.

Warning: This video will kick your ass. Seriously.

My sister and I used to do it together all the time in my living room before I moved out west. To get through the really hard parts, we each developed our own coping mechanisms. Lori got her revenge by giving Greg the finger as she burned through those excruciating leg lifts. I used to… oh, I can hardly write this with a straight face… I used to pretend I was auditioning to be one of the background exercisers, and so I’d maintain a pretty smile no matter how much pain I was in.

Lori literally fell over laughing when I revealed that little gem. Can’t blame her.

Anyway, I’ve often said that if you did Buns of Steel every day for a month, you’ll be in the most amazing shape of your life. With another JazzFest coming soon, and considering my pathetic performance on the hiking trail last Saturday, I think it’s time I put myself up for the challenge.

I am going to do that video every friggin’ day until I leave for New Orleans on May 1.

There, I said it. No, I proclaimed it. Every friggin’ day.

LOL I'm sure I have that Buns of Steel around here somewhere on VHS..now if I only had a VHS player!

That's the problem--it's not on DVD. My VCR recently bit it, so thank God the boyfriend set me up with a DVD/VCR combo, since my entire exercise video collection is VHS. My physical fitness depends on it!

[Waiting for some wiseass to ask about my collection of 8 tracks...]

So, Linda, tell me about your 8-track collection.

But seriously, that split is AMAZING! I couldn't do it that well when I was a cheerleader in high school. (I know you cheered too. All the great ones did. HAH!)

Buns of Steel every day, huh? That's quite the challenge. Good luck with that. I've challenged myself to not sleeping more than nine hours a day. Of course, the challenge is young, only three nights old, but I'm pleased to report: so far so good. (And don't feel envious or lazy. I wouldn't expect you or anyone else to take on such a daunting task.) Sadly, I don't think its done much for my buns.

Well, I don't have "Buns of Steel" but I do have another VHS for Body Sculting. Every day, huh??? Nah! Not for me. But then again, I don't plan on doing any splits on the bar in New Orleans. I'm going to test you in the first bar we go to there. See you soon!

Buns of steel is gay? OMG hahahaha! I had no idea (although I've never seen it). But now, you've sold me, I MUST have it. I love gay men.

I just got the Wii Fit and it kicked my ass. Too bad.

@ dluvdisney: Nobody plans to do splits on the bar. They just happen.

@ Tasha: I should clarify: Buns of Steel isn't gay gay, it's lame gay. Well, maybe it is gay gay. Hmmm... you got me thinking. I certainly like gay men, but I love gay women!

I'm impressed by the splits and a bit envious. There's no way I could get down in that position on purpose...maybe on accident but not on purpose.

You keep up with the Buns of Steel and you'll be hired as one of the background exercisers in no time!

I'll have you know, I can still do the splits as well.

We are so getting a picture of the two of us doing them next month....

Of course, I need to start stretching NOW.

You never cease to amaze me! The splits?!?! That is so impressive.

Did you do your Buns of Steel today? Are you sure you are suppose to do it every single day???????

@ Chocolate: "Background exerciser." That would definitely look good on my resume.

@ Julie: A pic of the splits next month--that's something to shoot for. No promises, though!

@ Barbara: I did do my Buns of Steel today--three days in a row now! I'm sure it's not something I'm supposed to do everyday, but if I get out of the groove, I'm afraid I won't get back in.

OMGosh - That is the greatest picture EVER! I only dream of doing splits on a table in a bar. You go girl - feel the burn, no pain no gain and all the other ridiculously trite exercise sayings.

We need a pic of you and Julie doing the splits and travel girl doing squats. ROFLMAO!

If it means anything I can't even sit on the floor indian style, so the splits are out of question. I was born kind of funky in the hips. HA

It is the ability to get up after doing the splits that sorts the young from the not so young.

I have realised that no matter how many squats I do, I will never, ever have the butt I had at age 21 - and I do loads of squats.

Tell me, do you have Jane Fonda workouts on your shelf?

I still haven't seen you do the splits. Maybe when we're at the biker bar one of these afternoons?