Oh, I had a great time at the Laughlin River Run this weekend! Laughlin is about 90 miles south of Vegas; I went down there with my friend Donna and we caught up on our girl talk the whole time. It was a beautiful day.

I’d say the drive down was uneventful except Donna got pulled over by a very nice, sweet cop (yep—some of them are) who couldn’t let her off completely because she was, after all, going over 90 in a 65 zone, and he reduced it to 75. It will still cost her $65, but the cop said because we were in a non-urban area, it wouldn’t even be reported to DMV. The guy was really nice, unlike that little shit that snagged me a couple of months ago (yes, I do hold a grudge).

Once we got down there, we met Donna’s dad, Ben, and his wife, Jan, for lunch. Ben is a swell old guy—I wish I had taken his picture. So freakin’ cute in his new Harley Davidson shirt. I love older folks because they live to complain and the filter is long gone—the truth not only rolls right off their tongues, but the volume is turned up to 10. We had to remind him--you know those tattooed Mexican bikers with the metal studs jutting out of their necks and faces? They're not deaf.

After lunch, Ben and Jan hit the road and Donna and I wandered around. There were tons of vendors lined up all over, but it was one of those situations where after a while you realize you're seeing the same stuff over and over. At first I thought those Ed Hardy knock-off t-shirts were cute, but then they just plain started to annoy me. By the end of the day I couldn’t stand the sight of them.

Finally we settled in outside the Colorado Belle casino, where they set up the bandstand. There’s nothing like a biker event for some serious people watching, and Donna and I got an eyeful. I absolutely love the “anything goes” nature of the biker culture. I guarantee those women didn’t try on 10 different outfits before they left the house, fretting in the mirror and wondering, “Does this make me look fat?”

This lady had to be close to 70 years old. You can’t see it in the picture, but the sides of her pant legs were all cut out, and I’m telling you, she had an ear-to-ear grin all day. Seriously, I have a lot to learn. 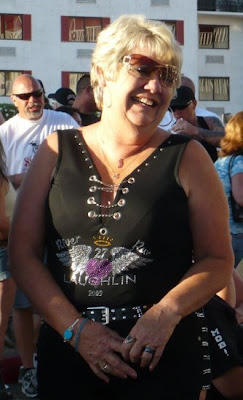 So we had a fun time and made a couple of new friends, including this one who offered to take me to Sturgis. (Oh, man, that would be such a party!) 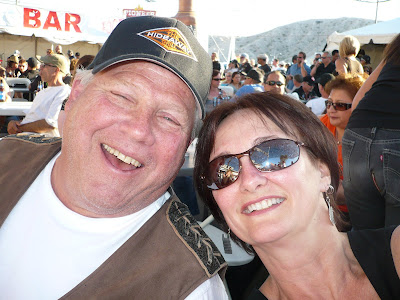 More fun is on tap for next weekend, when Donna and I head down to New Orleans for JazzFest. Yeah, sucks to be me!

Ah you make me miss being there with my dad!

So glad you had fun!

Wow, you're also a honorary biker chick! Who knew? Your talents are endless. Where's BF, BTW?

You gotta love older people who tell it like it is...

Oh, it was a blast! And the BF was back in Las Vegas--this was a girls' day out. But have no fear, we're going strong as ever. Not even 30,000 bikers could pull me away from him!

You travelling fool. Too bad that wasn't going on the weekend I'm out there! I coulda let it all hang out too!

Um, I want an Ed Hardy shirt. They just don't make them in Huge.

@ Julie: Um, helloooo... I'm sure we'll find something fun to do while you're in Vegas. If you want a biker fix, I'll take you to the Pioneer Saloon--no problem!

Glad it was nice weather - looks like you had lots of fun!!

Are you going to be at the JazzFest all three days? If you see James Taylor, please let me know how he is - I'm going to be seeing him May 16th! :)

I'm sorry that your life is so damn boring!

@ classic rock: I'll be there only on Saturday and Sunday--the Bon Jovi and Neil Young days. You'll enjoy seeing JT--he always puts on a great show.

I love motorbikes. The closest I got to owning one was a Vespa when I turned forty. Unfortunately my son needed braces so the Vespa had to go. Sigh. I once took it for a long ride with a whole lot of big motor bikes. It was a fund raising. When we got to the final destination the guys with the big Harley's said I was insane to ride a chair on wheels (Vespa) as it was dangerous! It made me laugh.

Oh Gosh who so does NOT suck to be you. What fun it looks. What woman has not had the desire to be a bikie chcik? Love that 70 year ol and can just see the cutouts, lol!!