OMG, I had the most amazing weekend!

As I mentioned in my last post, beloved boyfriend and I had tickets to see Leonard Cohen in Phoenix on Sunday, so we left Las Vegas on Saturday and made it a long weekend.

I was pretty psyched when we checked into the Cottonwood Resort in Scottsdale and they told us we were upgraded to a bigger casita. The grounds were beautiful, and at 700 square feet, our casita was huge. 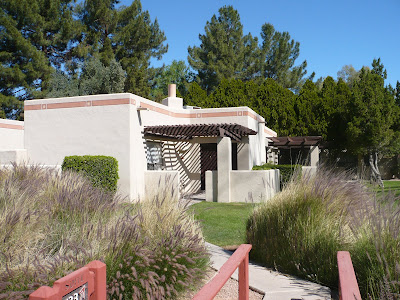 That was the good news. The bad news is, sometimes real life doesn’t quite match up to the pictures you see online. (Just ask anyone who’s dabbled in Internet dating.)

Remember how I wrote that we’d be staying in a swanky resort?

Here’s a photo of our casita’s living room from their website. 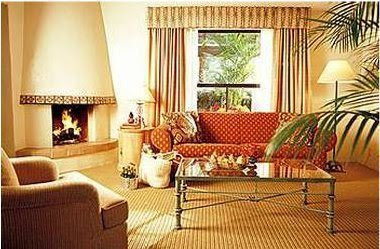 And here’s the photo I took. 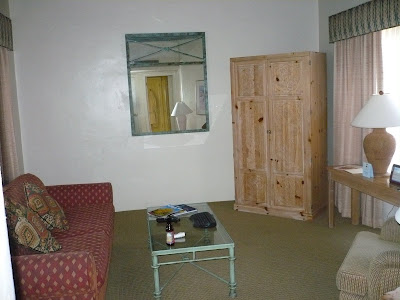 Swanky? Not quite. “Rustic” would have been a better word. And there’s nothing wrong with rustic, as long as you’re not expecting swanky.

I was really looking forward to having a private hot tub on the patio off the bedroom, but silly me, I expected it to look like this photo from the Internet. 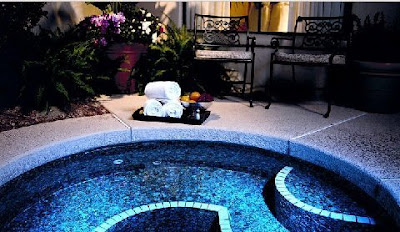 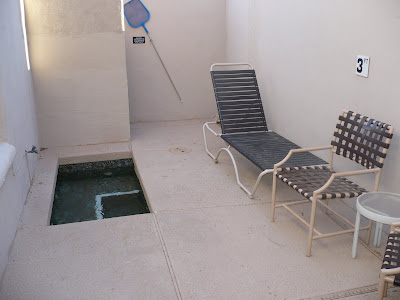 O.M.G. You can’t really tell from this picture, but the thing was barely big enough for two people. And the jets didn’t work.

We nonchalantly asked a neighbor about her hot tub. When she told us it was round and could fit “maybe four or five people,” we concluded that all hot tubs were definitely not created equally and at that point, the BF called the front desk and asked if we could be moved to another casita with a tub that wasn’t quite so... concentration-campy. They said they were booked for the night, but would move us to another casita on Sunday, which was not the answer I was looking for. I like to settle in hotel rooms, and once I have my toiletries and cosmetics all laid out, I don’t want to have to pack them up again and move. But nothing could be done until the next day.

So speaking of the next day… I’m happy to report that I did not have to administer CPR on the BF or wave smelling salts under his nose after he experienced Linda Lou's "Good Morning" look. (Really, I don’t know what happens to me during the night, but it's horrifying.) He said he actually liked my Albert Einstein hair, which is hard to believe, but nonetheless a smart thing for him to say and duh—he is in Mensa.

Sunday we hiked up Camelback Mountain. Not all the way to the top, though, and that was my fault. I didn’t realize what a strenuous climb it would be and about halfway up I was seriously going into “whiny mode.” Beloved BF is the most patient person on earth and I never once saw him roll his eyes when I had to stop for another water break about 10 whole feet up the trail from my last sip.

Despite years of ballet and yoga, I’ve never had much endurance and with my Private Benjamin tendencies, I can be a real pain in the ass. I was sure I was suffering from heat stroke when I stopped to rest on this rock, yet look how I bravely pulled myself together for my trademark campy pose. 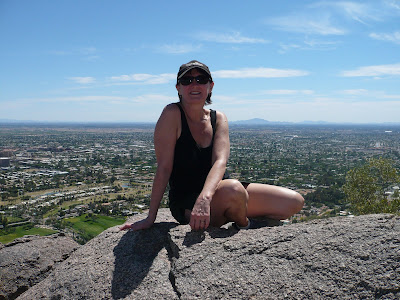 And nice of Mensa Man to tell me I was pulling a Britney Spears in this photo. 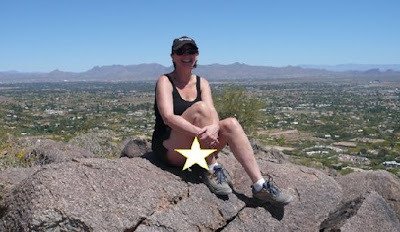 We’re on our way downhill here, so now my smile is sincere. Plus, whenever this guy has his arm around me, I'm a happy girl. 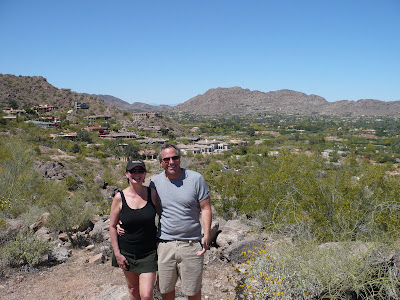 When we got back to the resort, we decided it wasn’t worth it to move all our stuff to another casita, so we hung out at the pool for a while and then went into downtown Phoenix for the Leonard Cohen concert.

I’ll give you a full review on Thursday, but in the meantime all I can say is, Best. Show. Ever. I'll also tell you why we would definitely stay at the Cottonwood Resort again. Yep, we would.

Wow! Talk about your false advertsing!
Sounds like you had an incredible time and your pics are amazing.

I love that part of the Valley. *sighs

Yay, Linda! I knew he'd be smart enough to see through the Einstein hair to the true gem that is Linda Lou! Let me know when you guys are ready to visit the East Coast together. You'll have your own bedroom, bathroom and pool at Chez Schubert! Oh, and we can sing at your wedding. ;-)

Honey, if I were off for the weekend with a man who looks that good, I wouldn't see daylight.

There's a big difference from the pictures on the website and the ones that you took. I think I would've been claustrophobic in such a tight space.

I'm anxious to hear why you'd stay there again.

You and BF look great together!

@ Debbie: Thanks for the offer! I would love to take you up on that someday.

@ all: Yeah, really--the pictures on their website look nothing like real life. I got an email today from the resort asking me to fill out an online survey about our visit. I included the link to this post. We'll see if I hear anything back...

Why am I not surprised about the room you got! Still, it seems you had a good time despite a bubble free tub.

I love to hike and my Mister does not! The only form of exercise he likes is in the bedroom.

We have that in common though:)