You know I love Canadians, eh?

I’m about to make some sweeping generalizations about a whole country of people, but I think generalizing is okay if you’re doing it in a good way. And if you’re so politically correct you can’t handle generalizations of any kind, you don’t belong on this site in the first place. So buh-bye.

I love Canadians. Remember #19 on my 25 Random Things About Me post? I wasn’t kidding. Look at this couple I met back in January on that Hummer tour to the Grand Canyon. 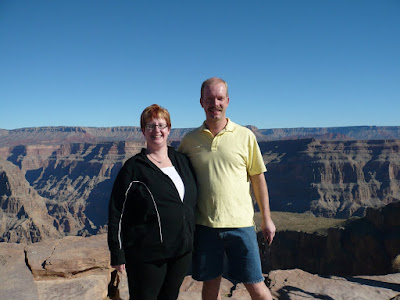 That’s Heather and Colin, from Alberta. They were really nice. So nice that when I asked them how many people live in the city of Alberta, they didn’t even roll their eyes and say, “Alberta’s not a goddamn city, you stupid American.” No, they just chuckled politely. See? Canadians are nice.

Canadian cities are awesome! So far I’ve been to Montreal, Toronto, Victoria, and Vancouver—all fabulous. Others I’d love to go to are Ottawa, Quebec City, Calgary, and Alber… ha! Alberta’s not a city.

Canada also seems to produce amazing musicians. One day I was looking through my CDs (yes, I still have CDs) and I noticed I have a disproportionate number by Canadian artists. Then I realized--holy cow!--most of my very favorite artists are Canadian.

This Sunday I’ll be front and center at the main stage at the New Orleans Jazz and Heritage Festival to see one the coolest guy on earth, Neil Young. (See #6 on the aforementioned list.) He’s Canadian—born in Ontario. And earlier this month you may have read my post about the trip the BF and I took to see Leonard Cohen. He’s from Montreal.

Originally from Quebec, Daniel Lanois is a name that isn’t widely recognized—he’s know only to incredibly cool people like moi—but I bet you’re familiar with his work. As a producer, he worked on a bunch of U2’s CDs, including The Unforgettable Fire, The Joshua Tree and Achtung Baby. He’s also produced many, many fine musicians including Dylan, the Neville Brothers, Emmylou Harris, Peter Gabriel, and more. 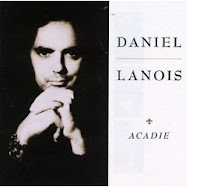 I got to meet Daniel Lanois after a show at the Bearsville Theater in Woodstock (fantastic venue) back in 1993. DO NOT tell him this, but I thought his handshake was… kind of weak. I feel bad saying that because he was really nice. Who cares, anyway? He did the music for one of my favorite all-time movies, Slingblade, and his debut CD, Acadie, is my “desert-island” CD. It’s also a great make-out-on-the-couch CD, too. I’m not kidding; it’s a gem. You can listen to a song here.

Speaking of make-out music, how about those Cowboy Junkies? They're Canadians. How much did you love The Trinity Sessions? Can you believe that’s over 20 years old now? Geez.

And hey, four-fifths of The Band--Garth Hudson, Richard Manuel, Robbie Robertson, and Rick Danko—hailed from Ontario. I did a phone interview with Rick Danko back when I had my radio show on WRPI and I got to meet him twice, too. I talked with him after his show at Café Lena in Saratoga—I want to say it was in maybe 1991—and then again at the Van Dyke in Schenectady, NY, in November 1998.

Alright, this is bad. Don’t tell anybody. That same year—1998—back when I worked at GE, my demented friends and I had a “ghoul pool,” meaning we each kept a list of the 10 celebrities who we thought were going to die. Whoever went through their whole list first would win. Sick, I know. Anyway, Rick Danko was on my list, so after the show at the Van Dyke I asked if he would autograph the back of my receipt and write “I’m still alive.” 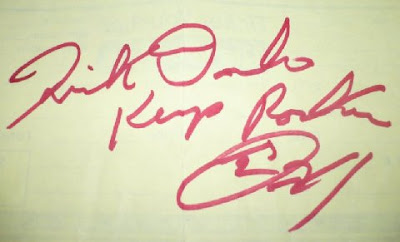 Yeah, it says, “Rick Danko…Keep rockin’” then God knows what that scribble is. Damn!

Rick Danko died just over a year later and in real life I was very sad. He had some tough things happen in life and every time I watch The Last Waltz, I’m struck by how young and sweet he seemed. Now I feel like an a-hole for putting him in my ghoul pool. Well, not really. He probably wouldn’t care.

More Canadian artists on my CD shelves include Joni Mitchell (of course), Bruce Cockburn, kd lang, John Campbell, and Meryn Cadell. Other Canadian bands and artists not on my shelves include Paul Anka, Jesse Winchester, Gordon Lightfoot, Alanis Morrisette, Crash Test Dummies (are they still around?), Rush, and The Guess Who.

Pretty impressive, eh? Sorry if I haven’t mentioned your favorite—there are a ton more. But you get my point. Yay, Canadians!

So I’m not going to be able to post on Saturday. My friend Donna and I are flying down to New Orleans tomorrow to meet my sister, brother-in-law, and my other friend Donna for Jazzfest. If you’re a music lover, all I can say is get your ass there next year. It’s an amazing scene, and it’s not just jazz. Actually, I don’t even care much for jazz; you’ll find me eating beignets in the gospel tent and dancing my ass off to zydeco music at the Fais-Do-Do stage. I can’t wait.

I may be able to post something from the lobby of the Courtyard Marriott at some point while I’m there. I’ll try.

Have a good weekend and as always, thank you so much for reading my blog!

Well is this ever a great post. Have to put a word in for one of my fave Canadian bands. The Barenaked Ladies. They have a very cool sound!

Cheers from this Canadian eh?

See, this is how I know we were separated at birth.

My license plate on my car is "Nice Eh", an homage to my ex's Canadian heritage.

Um, ya... weak handshakes bother me.. they just feel soft or something... like a limp dick. Kinda makes ya wonder. LOL

I set up that interview for you with Rick to promote Cafe Lena. (Did you have a different last name back then?) I think I may even have a tape of it somewhere. Did you also write a preview for that show? There were so many interviews around that time, it's hard to remember them all.

I'm also sorry that you put him in your "ghoul pool"--I was enjoying your post, until that part, and I do think he would have cared. He had a great personality and a great sense of humor, but I think it's kind of sad that you asked him for his autograph thinking he was going to die soon.

Anyway, if you'd like to read about Rick's life, please check out www.sipthewine.blogspot.com.

When you make it to Calgary (that's in Alberta, y'know), I have GOT to meet you!

@ Julie: You scare me! How can we be so alike? My ex was from New Zealand and ALWAYS said “eh.” He even had a t-shirt that said, “EH? It’s better than saying HUH?”

@ Di: Yeah, no kidding! Daniel Lanois was very nice, but maybe a little less time in the studio, a littl more time in the gym?

@ Carol: Wow, you have a great memory! I did have a different name back then—Linda Blackwell. Certainly no disrespect intended; Rick was a great guy and your site is awesome. I also had the pope on my list, I’m more concerned about wrecking my karma with that one.

@ Andi: Definitely! I would love to meet you, too!

I swear if my sister say "Eh" one more time I'm gonna poke her eyes out.

I do love Canada though!

I only know one Canadian in real life and she is a weird duck. I need to add that on my list of things to do. "Meet a cool Canadian"

Daniel Lanois! I am so frigging jealous! I love all Canadians, and they have some of the best musicians ever up there (down here its quantity vs. quality).

I am of Acadian descent and am very proud of my heritage. If you actually know of the Acadians I will be impressed!

@ Barbara: Daniel Lanois is awesome. But again, DO NOT tell him I thought his handshake was weak. That’s just my opinion, anyway, which could be totally skewed because you know, I’m so strong.

Of course I know about the Acadians—many settled down in Louisiana. I LOVE Cajun music, especially when they parle en francais. (Je parle un peu.) I took French from 4th to 10th grade and again in college, presumably because we lived si a cote de Quebec. Of course, it would have been easier for me to find a job in the Southwest had I had so many years of Spanish. Mais tant pis, ce n’est pas grave.

Linda, Awesome post, GF. Being a musician myself, I'm tres impressed by your musical knowledge! My personal Canadian faves are Neil, Alanis, and Rush. Have fun at the jazz fest and dance at least one half of your ass off for me. Kisses, D

I have only been to Vancouver but absolutely loved it.

I met a lot of Candians in Costa Rica. I agree, nice people.

Have fun in New Orleans

Well, Canada is so much more than Mounted Police! They also produce fantastic children's animations. In particular they did a wonderful interpretation of the Tintin series on DVD.