Okay, so I want to finish telling you about last weekend. If you haven’t read Tuesday's post, scroll down and read up. Not to tell you what to do or anything; it will just make more sense that way.

Sunday night was the Leonard Cohen concert, the event that prompted beloved boyfriend and me to plan a trip to Phoenix. For you kids out there, Leonard Cohen is a legendary songwriter. I mean legendary. There’s nothing I can say about him that hasn’t already been written. This New York Times article explains why he’s touring for the first time in 15 years, at age 74.

I have to admit I wasn’t always a fan. Chris, my first husband, used to play Leonard Cohen’s music in the house all the time, and it took me a while to warm up to it—I thought it was too dark and creepy. Then the beautiful melodies grew on me and I found I really liked him, though I wouldn’t dare put Leonard Cohen on the stereo if I were alone in the house—still a little too scary. Now, though, I’m totally hooked and want to tell the world about him, though all the super-hipsters are already in the know. I’d never seen him live, so I was out of my mind with excitement.

Sunday night’s concert was in the Dodge Theater in downtown Phoenix. On a Sunday night, the area was a ghost town, and we got there about an hour and a half early because that’s how neurotic I am. Thankfully there was a Greek restaurant across the street that had a full bar—good news because like you, I prefer to go into a concert with a bit of a buzz.

The show was incredible. Amazing. Spectacular. There are better ten-dollar words out there, but you know what I mean. It was one of those concerts where I savored every moment; every single second I sat there thinking, “I cannot believe I am here watching Leonard Cohen.”

His voice sounded as it did 20, 30 years ago—dark and brooding. Even at 74, he moved with grace, often dropping to one knee as he sang and springing back up effortlessly. (I think he must do yoga.) He even skipped off the stage a couple of times! And he seemed so humbled, so appreciative of the audience’s obvious adoration… it was a wonderful experience.

Everything was top-notch. The Dodge is a fantastic venue; there’s not a bad seat in the house and the sound, the musicians, the backup singers… everything was perfect. 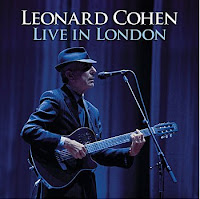 There are still quite a few more dates on the tour, so check out Pollstar and make it a point to catch his show. I guarantee you won’t be disappointed. And if you’re unable to make it to a live performance, I have good news. You can buy the DVD of his 2008 concert in London. The set list from that shows looks very similar, if not identical, to what we were treated to last Sunday night.

Perfect. That’s all I can say.

Now let’s get back to the not-so-perfect Cottonwood Resort. After seeing the pictures in my last post, you’re probably wondering why the hell we would ever stay there again. I’ll tell you.

The location was excellent; we were minutes from Old Town Scottsdale and Camelback Mountain, where we hiked on Saturday, and we weren’t too far at all from the Dodge (and on a Sunday night the traffic was nonexistent). Although the front office of the Cottonwood is located right on busy Scottsdale Road, you have to drive back a bit to get to the casitas, and as I said, the grounds were beautiful. This shot is not from their website; I took this. 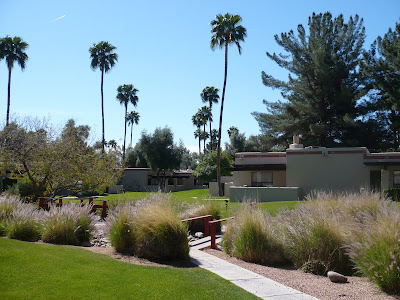 I almost booked us at the Marriott Residence Inn next door, but that would have been right on the road and soooo typical. And it cost only $10 less per night. Our casita was huge—much bigger than what we needed—and it was clean, which is most important to me. The bathroom was enormous! But there was only one, meaning the BF and I had to share it and generally I don’t like to pee where boys have been, but that neurosis is a subject for another post. (Stop laughing, Hurricane Mikey.) So yeah, the Cottonwood was fine, but next time I would make damn sure we got a casita with a decent sized hot tub.

On our way home Monday afternoon, BF and I stopped for lunch at the Silver Spur Saloon in Frontier Town in Cave Creek, just north of Scottsdale. Cave Creek is a funky area that I’d been to many years ago on a Scottsdale/Sedona trip with Mom and I wanted to check it out again.

Here we are before we hit the road and headed back to Vegas. 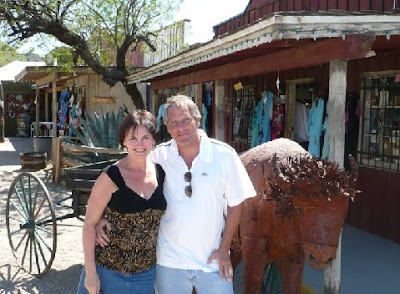 So it was a memorable trip, to say the least. But the best part was being able to spend two full days and nights with beloved BF. You learn a lot about a person during a 5-hour road trip and after this initial trek I’m even more in love than before. We’re still very early in what I pray will be a long journey together, but we sure got a great start. And if you've ever read this post of mine, you'll be very, very happy for me.

I adore Leonard Cohen.... I'm often surprised by the number of people out there I run into that have never heard of the man. After all, he does the theme song for The Sopranos TV show. How can people not know him from that?

Anyways, I've always loved Carefree and Cave Creek area. BUT, it's changed a lot over the years... everything does, doesn't it.

Dammit, between you and Darlene, I'm gonna be gagging all weekend over you lovebirds.

Unless of course, you find me a guy between now and then. LOL

I'm so glad you've found your beloved boyfriend. (And WHAT a hottie, I might add!) Again, can't wait for the two of you to travel east...

I'm big on Cohen myself. I flew from Chicago to New York for the Beacon Theatre show, and it was the best investment I've made. I do have 2 points: (1) It's a common error propagated on the web, but Leonard Cohen did not sing the theme for the Sorpranos. "Woke Up This Morning" is properly credited to Alabama 3. (2) Is being knowledgeable about Cohen necessary and sufficient to qualify as "super-hipster?" If so, is there a qualifying exam?

@ Julie: Don’t worry, Dar and I will try not to be so annoyingly in love! And fingers crossed—maybe you’ll meet someone in the next 43 days and we’ll all be gushing.

@ Debbie: He is so hot--sometimes I wonder what the hell he’s doing with me! Especially now that he’s seen me first thing in the morning. I just don’t get it…

@ DrHGuy: Thanks for commenting and setting us straight on the Sopranos song. And being knowledgeable about Cohen isn’t necessary to qualify as “super-hipster,” but it’s surely sufficient!

Ah so sweet. Sounds like you had a great time with a great man! Good for you! Wish I could make it to Vegas. BOO

Oh it does sound like you had the most wonderful time.
If you have a second head onovefr to my blog. I tagged you :)

So happy for you, its just fantastic and its written all over your posts. Very positive and he is gorgeous too!!! You deserve it big time!!!

My Hubby loves L Cohen, and he plays Lissadell House in Sligo (Ireland) this Friday, but unfortunately he wouldn't go cos that's son's first night home after a 3-week camp. Sweet of him, but I doubt that opportunity will arise again.
I had that "I can't believe I'm watching ... live" at Paul Mc Cartney's concert in June. It's magic how they can still sing so beautifully at that age.