The beauty of strangers

I love traveling because I always meet the nicest people. Look at this sweet girl who sat next to me on my flight to Albany last Thursday. 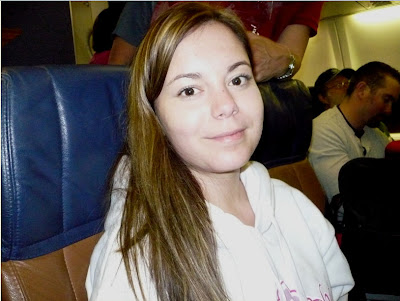 Her name is Kaitlin and she’s from California, but she’s currently living just north of Albany with her boyfriend, Sean. He’s in the Navy and is learning to be a nuclear something-or-other, I want to say engineer. Suffice to say, he’s a hell of a lot smarter than I am.

Kaitlin struck up a conversation with me over my People magazine with Sandra Bullock on the cover. Yeah, don’t we all have an opinion on that? Well, I can tell I’m interested in someone when I put down my celebrity rag to shoot the breeze with them, and I found my adorable new friend fascinating.

You know how when you’re talking to someone you try to guess their age and hope it comes out in conversation so you know how right you were? I figured Kaitlin was one of those 26-year-olds who looks 15, but no, she’s actually only 19. Nineteen! That in itself is freakin’ precious. The only reason I thought she was older is because she seemed so together.

Kaitlin told me she was only 1 pound, 13 ounces when she was born—can you imagine? She’s an only child, and the reason she was so tiny is because her mother had lupus. Unfortunately, her mother died at age 38, when Kaitlin was just 8.

Kaitlin had a bunch of pictures in a plastic bag that she was bringing back to show her boyfriend. She asked if I’d like to see them, and of course I did. She showed me photos of herself as the teensiest little baby with oxygen tubes running into her nose and then at various stages of her childhood, with her parents and later with just her dad. Her mother was a beautiful dark haired woman of Creole descent and Kaitlin’s father looked like the party guys I went to college with. In every picture, their little girl was smiling broadly.

A motherless child—how could she be so happy? I wondered. A nanosecond later Kaitlin said, “The thing I miss most about my mother is her smile. She was always so happy.”

I enjoyed every second of the three hours or so of our conversation. When we landed, I asked Kaitlin if I could take her picture for my blog and she insisted I also get one of the two of us together. I obliged, despite my anxiety of a close-up of my 52-year-old face cheek-to-cheek with a beautiful 19-year-old. 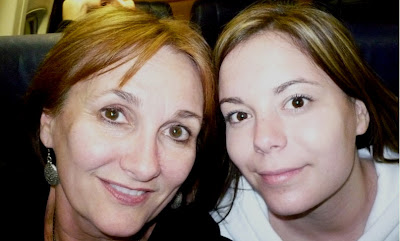 In the terminal, I introduced Kaitlin to my sister and grandson and I met her boyfriend, Sean, before we hugged and went our separate ways. I’ll keep in touch with her, just as I keep in touch with another young traveler, Tobi, whom I met on a flight a couple of years ago on my way home from New Orleans. I love that kid, too.

These young friends of mine make me feel I’m a very lucky gal. Wonderful things happen when strangers are no longer strangers.

You are a people magnet...they look into your big, brown, friendly eyes and say to themselves, she looks interesting to talk to...and I bet she is friendly too....xoxo

Isn't it funny how we make friends accidentally? I have a few of those myself!

Wow Linda! Obviously, laughter keeps you wonderfully young looking. Fabulous skin tone you have, especially when you can sit next to a baby and still look Ivory soap lovely.

Wow, Richard--you are my new favorite person on earth!

Love making new friends!! So sweet of you to stay in touch!!

Wow Linda. I love love LOVE this story! I'm like you - I love talking to strangers and hearing their stories. I just wish I had more time (and less kids) to engage them. This was a very neat story. She looks like a wise girl.

Do you ever wonder if some kind of force puts people in our paths for some greater purpose?

She does look like she could be part of your family!