The Marriage Ref and why I long for TV of yesteryear

Tough crowd for Thursday night’s show. Actually, the audience was good, there was just one drunk woman in the back who I was ready to kill. Fortunately, I have some experience in dealing with the inebriated, so it wasn’t a major problem, just more of an annoyance. Last night’s audience was fabulous, though, and more than made up for it.

Anyway, when I got home Thursday night, I poured myself a glass of wine (fancy me, huh?) and while channel surfing landed on The Marriage Ref, NBC’s new show produced by Jerry Seinfeld. What a train wreck. Three celebrities provide counsel to married couples with some weird friggin’ problem presented in a video and the host, who acts as the ref, considers their input before making the call for one side or the other.

Ordinarily I’d blast right past such inanity, but I had to watch because on this night the three celebs were Larry David, Madonna, and Ricky Gervais. As you know, Larry and Ricky are my all-time favorite comedic geniuses, and Madonna… well, she’s Madonna. But what a waste of such incredible talent! Are they really deciding whether or not a woman should be allowed to keep her dead husband’s prosthetic leg (still wearing a tube sock, by the way) in the closet she now shares with a new husband? 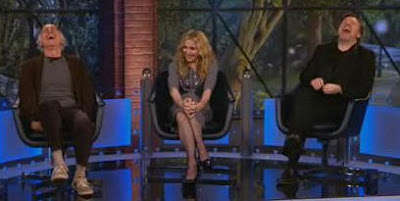 Sure, they’re laughing, but you know they’re crying inside. Ricky even said something like it was the most bizarre hour of his life, and you know the only reason such big names would do this is because of Seinfeld.

God help us, the drek they’re serving us on network TV. Remember when shows actually had a storyline, written by professional writers? Between the reality shit and lazy crap like this, I long for the good old days.

Remember thirtysomething (1987 – 1991)? I loved that show! How freakin’ cute was Gary? Remember how sad it was when he died?

Now about Picket Fences (1992 – 1996)? Quirky as hell, but well done! And didn’t you just adore Northern Exposure (1990 – 1995)? Janine Turner was my sister Lori’s celebrity girl crush for years until she found out she’s a super-Republican. Now it’s Queen Latifah.

NYPD Blue (1993 – 2005) was groundbreaking in its early days. Remember seeing Andy Sipowicz’ ass? What a character he was. Every Tuesday Christopher and I had this goofy mother-son bonding routine.

More recently, I loved the show Once and Again with Sela Ward, but that didn’t last long (1999 – 2002). Now the only drama that gets my attention is Rescue Me, but honestly I wouldn’t give that a second look if it didn’t star Denis “Get-out-the-whipped-cream-and-handcuffs” Leary.

How about you? Do you wonder why you’re paying an astronomical cable bill when there’s not a goddamn thing on? What shows do you miss? Is there anything worth watching?

As for comedy, I recently discovered the Big Bang Theory on CBS on Mondays. The dramas really stink, although I have discovered Grey's Anatomy, it's filled with enough sex and friction between the characters to keep me interested.

There are two shows I try not to miss, House and Burn Notice.

I actually like a lot of the shows, but then again, I just want something light and occasionally salacious enough to help me forget any residual job stress for the day. Which is why I mostly watch comedy. I can always use a few more endorphins.

Oh wait. I do love Saving Grace. But, as most of the networks have done with all my fave shows, it's apparently cancelled. Go figure.

P.S. I give the Marriage Ref three months, if that. Care to make a wager?

I loved Thirty Something and several others that seem to get canceled. Just heard that Saving Grace was ending. Why do they all get rid of the good shows!!

I really miss the X files. Haha. Mainly because it was just a Sunday night ritual at my house (The Simpsons preceded it!). And I really liked Once and Again too! Used to watch that with my mommy.

I still watch the Office religiously. I'm about to give up on Desperate Housewives.

DUDE I LOOOOOVVEEDD Picket Fences!! AHAHAHAH I thought it was forgoten by all but me :D I had my first boner over some guy on there, he was young and had this big pouty bottom lip and big ole blue eyes! Mmmmmmm And Northern Exposure is one of my ALL TIME favorites! You have such good taste! I wish I could see you live! (are you on youtube????)

Oh me too, me too. I LOVED Thirty Something...and Gary was my fav! I cried for two days when he died! NYBD Blue...LOVED IT!! Big Fan.
What did you do to your blog? We can't read the writing. The background looks midnight blue and the print is too light to read...need more contrast!

Linda, I almost NEVER watch Television and I can honestly say I don't feel like I'm missing anything either. Nothing but crap on these days. I'd rather watch Elmo with my daughter - at least he sings and dances unlike the no-talent, un-funny folks on reality TV.

Where have all the good writers of television gone anyway?

Once and Again--I can see that would be a great mother-daughter bonding show!

Linda--
I never miss MAD MEN or DEXTER, both of which are awaiting new seasons this summer.

And there's a new show debuting tomorrow night on FX called JUSTIFIED, starring Timothy Olyphant (of DEADWOOD). It looks like it might be worthwhile.

I terribly dislike that show. I thought I wanted to record it, but honestly it's not good. It's horrible!!! The celebrity judges look so uncomfortable.

Shows I won't miss are Desperate Houswewives, House and 24.

Even the news is not the news anymore. They all 'try' to entertain us when all I want is the damned news!!!