I could hardly get to sleep last night. After work I headed over to the Hilton to check out a Bruce Springsteen tribute band called The Rising—what a blast! I freakin’ love tribute bands; they’re great fun in a tongue-in-cheek kind of way. (I never fully grasped the meaning of that expression).

This is the third Springsteen tribute band I’ve seen since I’ve been in Vegas. The first one was Bruce in the U.S.A., which I believe is how I got on this whole tribute band kick, but Springsteen! The Premier Tribute to the Boss is my favorite because they play songs mainly from the early years. Since then I’ve seen tribute bands for the Beatles, the Rolling Stones (last week), the Doors, and two honoring Neil Young and U2. I know I’ve seen more; I just can’t think of them.

It’s always nice when the guys in the tribute band physically resemble the members of the actual band. During the show last night I was thinking if I ever went to a Temptations or Earth, Wind and Fire or O’Jays tribute band, I’d be totally happy as long as there was a bunch of black guys on stage. In fact, you could sell me a ticket to an O’Jay’s concert and substitute the real band with tribute guys and I totally wouldn’t know the difference. Kind of like the old Folger’s instant coffee commercials. We’ve secretly replaced the O’Jays…

That’s not racist, right? I don’t mean it to be. I’m having dinner tonight with my friend Judy McFadden (who is black, even with the McName—remember this “I’m your Caucasian” post?), so I’ll ask her. I betcha she’ll say it’s not racist and the only ones who would think it’s racist are those pansy politically correct white people who won’t even say the word “b-l-a-c-k” and refer to every person of color as African-Americans even though they could be from Jamaica or Guyana or London or Montreal. I bet if they were robbed by a black guy, they’d tell the police they were “fiscally depleted by a gentleman who just happens to be African-American.” See, they’re the ones giving white people a bad name.

Anyway, the reason I could hardly get to sleep last night was because when I got home I got all wound up by a comment on my last post from MA Fat Woman giving me some great advice about my trip.

“From Nashville, go east to Knoxville and to Pigeon Forge (Hello, Dollywood)…”

Dollywood--YES! That never even occurred to me. Although with my bird phobia, the thought of going to a place called Pigeon Forge is a bit disturbing.

OMG, I am so freakin’ excited about this new adventure of mine. Keep those suggestions coming!

Now I’ll leave you with a picture of the Dolly Parton bridges that cross the Mohawk River just north of Albany. 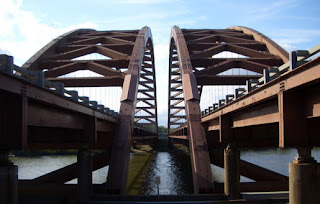 And this picture of the O’Jays. 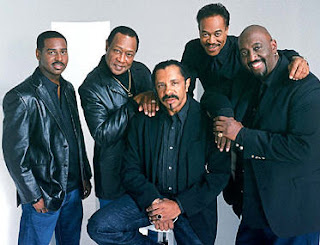 Psyche! It was the Temptations.

Oh yeah Dollywood but stay away from the bird show!!!!!

"Stay away from the bird show."

You only have to tell me that once.

"Psyche! It was The Temptations." You kill me!

FYI-I've never seen any pigeons in Pigeon Forge. Hillbillies and touists--yes, but no pigeons.

You crack me up! Fiscally depleted! I just read that they changed the name of food stamps to SNAP - Supplemental Nutrition Assistance Program. Food stamps being offensive and all.

PS More pictures of Hazel please -- she is soooo cute :)

Love me some Dollywood.

I'm blogging back at Fertile now!!!

Even though you only mentioned them once, I now have Earth Wind and Fire soundtracks running through my head. So in essence playing my own tribute to them...you never cease to inspire!!! BTW, I mentioned you in my blog today...peace!

I went to a tribute to Prince in Vegas and I thought he was pretty good because he did resemble him.

I say that they have to at least look like that them in order for me to like them.

Oh I had completely forgotten about that area!! It is beautiful!! We (husband,daughter,son in law,grandson) are going in June for a week.

Linda, most of the members of the older singing groups are not the originals. Look at the Temptations, one original member. But the new "brothers" can wail. So you passed the "racist" test again. Enjoyed dinner with you, Grandma, and I'm going to miss you.