Bitch Linda clone’s day off, my 25-year-old BFF, and my excellent adventure at a 2005 comedy conference

Ahhh… Saturday! I have absolutely nothing on my calendar today and can do whatever the hell I want, which means that Bitch Linda clone is off the hook for today. (Better read Monday’s post or that’ll make no sense.) Yep, Bitch Linda clone was on duty all week from 7 – 4, though real Linda took over during lunch hours, and I had a couple of really fun lunches this past week. Yesterday Mike and I went to Panevino’s and split a marguerite pizza—yum!—and Wednesday I had a delish eggplant parmesan at Bootleggers with my 25-year-old co-worker and BFF, Joe.

Man, I love this kid! (I call him a kid because I’m an old bat—ha!) Joe is one of the funniest people I know—right up there with my sister Lori and my son, Christopher—and the two of us play off each other and laugh so hard, we can barely get out the next punchline.

Our lunch reminded me of a comedy conference I attended in Palm Springs back in 2005. One of the workshop instructors was sit-com writer Tracy Newman, whose sister Laraine Newman was an original cast member of Saturday Night Live. Tracy mentioned that older women have a hard time getting comedy writing gigs in Hollywood, and as a result, they often team up with young guys who have more street cred in that industry. I think of her words often when I’m yukkin’ it up with Joe, and mark my words, someday the two of us will work together on a creative endeavor that will make you pee your friggin’ pants.

I gotta tell you about that conference. My sister Lori and her husband, Russ, flew in to Vegas and the three of us drove down to Palm Springs. They explored the area while I attended the sessions during the day, and then we hooked back up for the nightly showcase.

Each comic attending the conference had two minutes to perform in front of everyone, including about 10 industry people from LA such as Tracy Newman, the guy who played Wanda Sykes' straight-man manager in the short-lived series Wanda Does It on Comedy Central, and "The Drake" from the Seinfeld episode, "Gotta love the Drake." We were all scored on a scale of 1 to 5 in five categories--originality, material, ability to connect with the audience, stage presence, and something else I can't think of--for a maximum of 25 points. The top three scores won cash prizes.

About the other comics… There was Barbara the transsexual who looked like he was dressed up as his Italian mother for Halloween, the poor guy with the eye patch who had developed Bell's palsy just days before the conference, a sweet guy named Michael who had a brain aneurism a few years ago and was still pretty all messed up, and (my favorite) Brian the dwarf who just got out of jail. Some comics didn't give themselves away until they opened their mouths, like the bipolar maniac and, God bless her, the woman with ass cancer who now has no anus. Think of the bar scene in Star Wars. Comedy conference or telethon? Where was the one-armed albino? At least everyone could laugh at themselves--very inspiring.

I did really well--my best set to date. My scores ranged from a perfect 25 (from Wanda's sidekick) to a 15, which was the highest score that particular judge gave out to anyone, so that was okay. May I brag about the written comments? "She's great!" "Adorable on stage!" "Beautiful routine!" "Lots of potential!" "Good comedic personality!" "Great job!" "Fun material!" Alright, I added some of the exclamation points, but still--very encouraging. (You know me—so full of myself.)

I didn't score high enough to get in the money, but judging from the other scores that were compiled in a book we could review, I'd say I was certainly in the top 10 (out of over 100 comics), so I was pretty happy--especially since at that point I’d been performing for less than a year. Brian the little person came in third place. He turned out to be a really nice guy, and I felt bad when during one of the pre-showcase receptions, Russ, out of the corner of his eye, thought Brian was a trash can and almost threw out his empty beer cup on him.

All in all, some of the workshops were very informative, some not so much, but it was a great experience, I met a lot of wonderful people, and I did come away with some strategies to strengthen my act. Good times!

So anyway, as Joe and I were leaving Bootleggers, he pulled out a camera and took this picture, which I thought was really sweet because how many 25-year-olds want to have lunch with a granny and then document the experience for posterity? 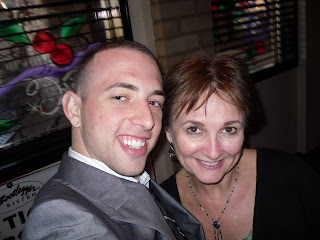 Doesn’t he remind you of Jerry Seinfeld? And you know what else? He’s one of the nicest people I’ve ever met. I love this kid.

How cute is he? Does he have a single dad for me? LOL

Does he have a single grandfather for me? Or brother?

Side note: So, finals have been taking over my life for the past several days, but over Christmas break I fully intend to review your book on Amazon!
I'll get more single girls my age to pick it up. :)

He looks like he knows how lucky he is to have lunch with Linda Lou!