Happy Freakin' New Year! As much as I'm not really into Christmas, I love New Year's, and not just because it's another excuse to party. I love the sense of renewal, of starting over, of making goals for the upcoming year and working like hell to make them happen.

There's nothing like that feeling of accomplishing your goals--I thought of that last night when Lee Odell, my favorite professor from RPI (Rennselaer Polytechnic Institute, where I went to grad school), stopped in at my book signing. I finished my master's program in tech writing in 1991 and haven't seen him since, so that was a real thrill. Coincidentally, he's married to my friend Kevin Bacon's sister, whom I met for the first time. I knew I would love her, and I did! 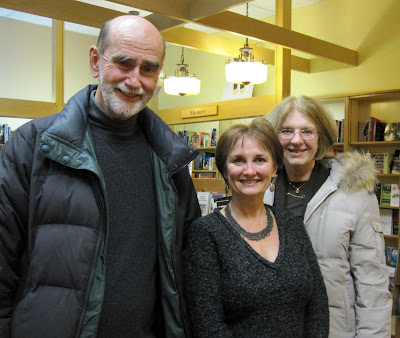 I had imagined a book signing to be dreadful task where the author sits around like the Maytag repairman (my younger readers probably won't get that reference), but I had a good turnout and we actually had a lot of fun. Probably because I served alcohol.

Wait, what kind of beer and wine is that? 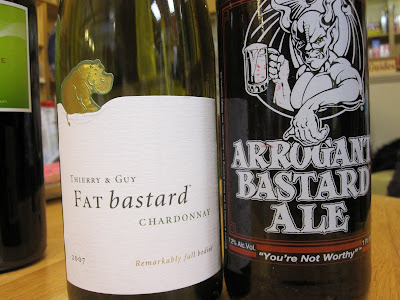 Tonight I'm heading back to Rensselaerville for a New Year's Eve bash at Courtney and John's house. It'll be pretty low key, but that's fine with me--I'll be kissing someone I love at midnight, and that's what counts. Then I leave on Friday, arriving in Vegas around 11 p.m. (fingers crossed) and I'll be kissing someone else I love when he picks me up at the airport.

I wish you all a fun and safe New Year's Eve and we are going to accomplish great things in 2010. And I do mean "we."

Damn I missed the Fat Bastard?

Linda,
I hope you gave Linda and Lee a big hug for us!!! I need to try that wine!
Happy New Year!
Ann

Love all the "bastard" alcohol... hilarious!

Linda -
What a fun signing! Lee got a kick out of it, and I was so happy to finally meet you. Let us know when you'll be in town again.
Have a deliciously happy New Year! - The other Linda Lou, sister of the other Kevin Bacon.

I see a Pulitzer prize for literature in your future!

Oh Linda, sounds like you had a fun and festive good-bye to 2009 and I know 2010 is going to be filled with great new adventures for you!

You went to RPI?! My oldest sister's first husband went to RPI back in the late 70s and into the early 80s before getting a job at Corning down in Ithaca.