You know my father was a bus driver, right? He wasn’t just any bus driver; he was the mother of all bus drivers. Like if you looked up “bus driver” in the dictionary, you’d see his picture.

And that’s not the only place you’d see his picture. He was also a male model. Well, not really—we just called him that after he was selected to be part of the Capital District Transit Authority’s promotional campaign because, well, if anyone looked like a bus driver, he did. Yep, there he was, smiling on billboards plastered all over the Albany area.

When he died back in 1999, my sister Lori had one of the old billboards in her garage and we thought it would be cool to display it at his wake. It was pretty funny (and comforting) to watch people enter the viewing room at the funeral home and then start cracking up. 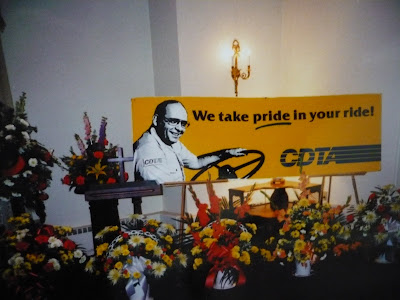 I mean, wouldn’t you?

When Lori and I were up in Idaho last month, we reminisced about the story he loved to tell about the wintry night he drove an empty bus up Madison Avenue on his way back to the garage.

“I’m coming up the hill, and there… there in the road I see a pizza box. A nice, hot pizza… I could even see the steam. My mouth is watering, so I pull the bus over and get out, thinking, ‘Ooooh, this’ll be good’ and next thing I know a car comes along and runs the goddamn thing over!”

He could tell that story a million times and we’d howl with each rendition, exchanging glances that said, “Can you believe Daddy would eat a pizza lying in the road?”

Last Sunday would have been my father's 76th birthday, so I’ve been thinking about him a little more lately. Sunday was a windy, blustery day here in Las Vegas, so I had myself a “shower holiday” in his honor and spent a quiet day at home hanging out in my sweats. Monday was back to business as usual, and on my way home from work I stopped at Albertson’s to get some groceries.

And there… there in the parking lot I see a Starbucks cup. A nice café mocha… with the lid still on and a straw right there next to it. 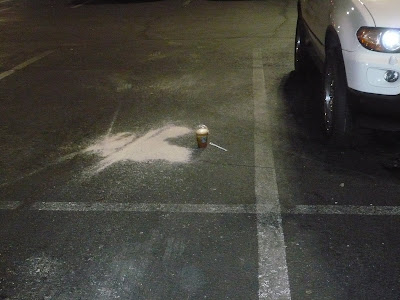 No, I didn’t see it get run over, and I didn’t pick it up and drink it. I just smiled to myself and thought of the nutcase that was my father.

We miss you, Dad, and hope you’re having some laughs up there with Beautiful Aunt Joyce.

What a great story about your Dad. I love that you and Lori put the billboard up at the funeral. I'm sure he was smiling.

Holy Crap! THAT is where I left my hazelnut latte!

What a cute story! Love it!

That's a cool story! Love it

what a sweet story about your dad...he sounds like a crack up. Is that where you get your great sense of humor?

Your dad sounds like he was a hoot - and you and your sis got some (all?) of his hootiness apparently! ;->

saw your post on She Writes, so checked this out. I loved the glimpse into your Dad's life and and the way you found synchronicity and a strange comfort in the coffee cup in the middle of the road. It's nice he left you with his sense of humor!

I get the feeling your dad would have loved finding that Starbuck's cup there. Maybe it was a sign that Dad is still with you. I like to think that.

P.S.
Got Bastard Husband in the mail last week, and hope to read it this weekend. I've been a little preoccupied these days and have done absolutely NO reading. I think I'm intellectually starved.

I like to think the cup was a sign from him, too, Liar Girl! Um, not sure Bastard Husband will cure your intellectual starvation. Better lower the bar a bit.

Slacker and Anon: I think I did get my sense of humor from him. My mother is funny, too, but mostly totally unintentionally!

My father wasn't a bus driver by trade (he was an elementary school principal). But he did have a Class C drivers license that allowed him to drive buses. So, during the 1980 Winter Olympics he picked up a little extra scratch by driving a bus between Saranac Lake & Lake Placid to bring spectators from their hotels/motels to the various Olympic events. He was sitting in the parking lot outside the hockey arena when the US upset the Soviets in the Miracle on Ice game listening to the game on the radio.
Even if he was only on the periphery, just to be that close to such a huge piece of sports history is quite remarkable imho.

When he retired in June 1988, at his retirement party one of his old army buddies told the tale of when he drove an Army bus into a ditch in Germany back in the 50s. Those are the only 2 bus driving tales of my father I ever recall hearing.

I love the idea of the banner at his funeral to make people laugh; must find a way to incorporate laughter in my own family funerals. Crying is cathartic but mixed in with a good laugh--you can't lose. Great Dad, nice post!

You sound like sentimental me! I love this story.

Just like in your book - I find myself laughing out loud and then wanting to cry in just a matter of seconds. It is the human factor in your writing that appeals to so many - I love how you and your family find humor in EVERYTHING!

Bastard Husband was the perfect read on my 5 hour road trip - but my husband and kids thought I was crazy because I was I was laughing out loud so much. Thanks Linda!

I hope he shared the pizza story with my dad, it must get boring up there sometimes :)